About the Kona Airport

On January 1, 2017 the Kona airport was renamed “Ellison Onizuka Kona International Airport” at Keāhole to honor fallen astronaut Ellison Onizuka who was born and raised in Kona.

Kona airport is easy to navigate and has a charming look and feel because of its open-air design and the tiki hut style roofs. There are no large and sterile hallways or multistory buildings and we are small enough that you get to board your plane directly (i.e. you’ll walk over the tarmac to your airplane) which is always a fun experience.

the only negative we can think of is that the waiting area inside the airport can become uncomfortably hot, especially during the afternoon. 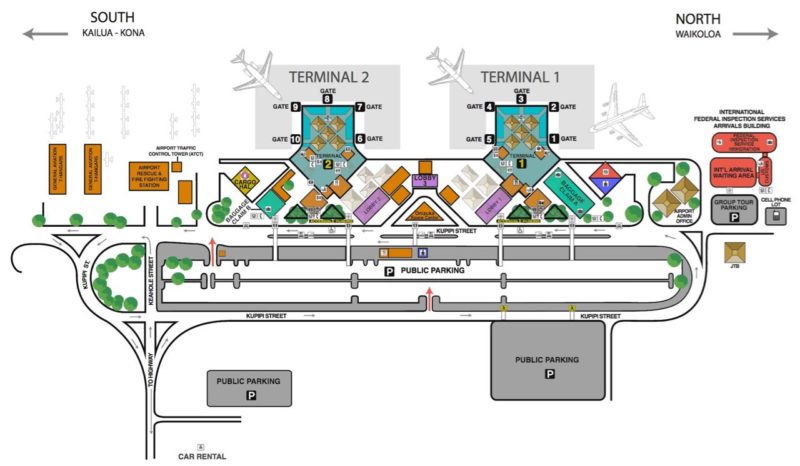 Map of the terminals at Kona airport. Image source: hawaii.gov.

You can find more information on the official website of the Kona International Airport.

Renting a car at Kona Airport

Most people that arrive on the Big Island do so at Kona. Renting a car at the Kona airport is easy and convenient, but you should be plan ahead to make sure you get good rates. Most big car rental companies are represented at the airport, as well as some local ventures. You can find their offices in front of the airport (see map above).

Local companies often offer the best rates. We recommend to book your car in advance, because the car supply on the Big Island is limited and easily runs out during mid-size and large events such as the Ironman Triathlon and the Merrie Monarch Festival.

Getting to and from the Kona airport

Kona International Airport is located 7 miles north of Kailua-Kona, and 25 miles southwest of Waikoloa.  You can use several modes of transport to get from the airport to your first destination:

Approximate driving times from the Kona International Airport to several landmarks on the Big Island are: 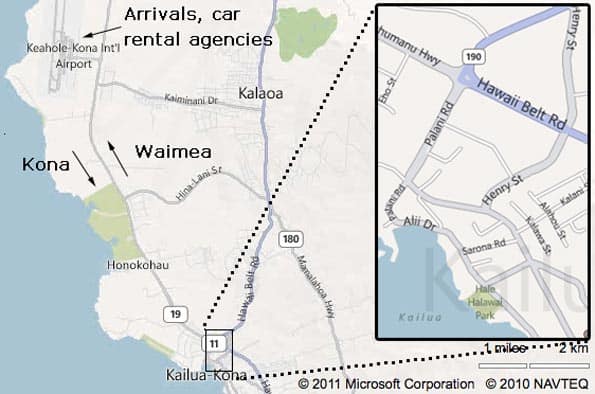 Did you know that many people on a tight time-budget regret using the same airport to fly to and from the Big Island? Especially if you want to see both the West (Kona) and East (Hilo) side of Hawaii and have less than seven days to spend it is a good idea to arrive and depart from different airports. Have a look at our suggested itineraries if you are on a tight schedule.

For example, try flying into Hilo and staying there two days, then get a cozy vacation rental with hot tub in Volcano Village to explore the Hawaii Volcanoes National Park for another two days, and conclude for three days in sunny Kailua-Kona for great beaches, snorkeling, and much more.

This can save half a day and quite some ‘return the car in time’ stress from your itinerary. Most rental agencies on Hawaii allow you to drop off your rental car on the other side of the Big Island without extra fee, so make sure to ask when booking!