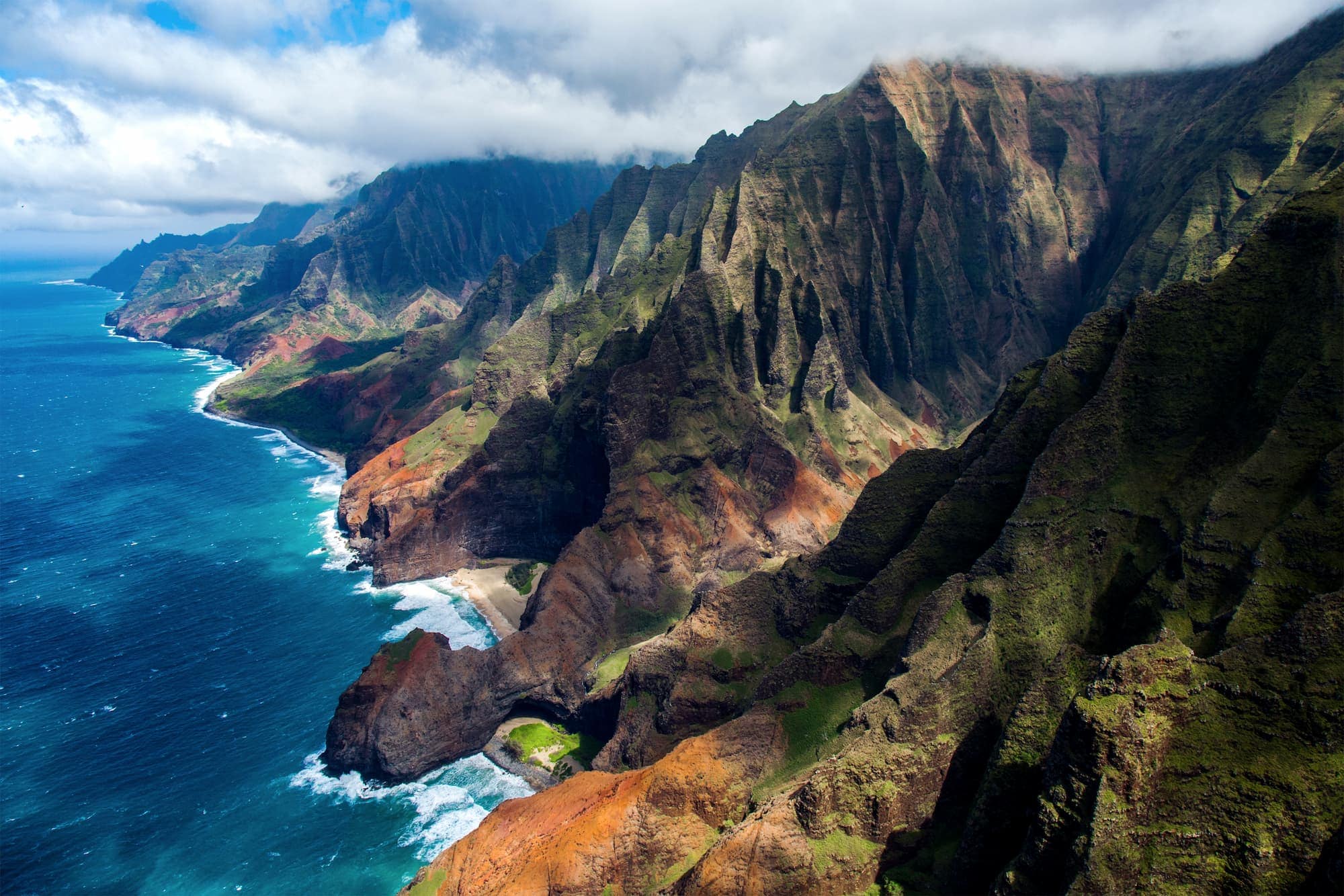 Known for its natural beauty, the Nāpali Coast is one of the most sought out destinations on Kauaʻi. But what makes it so special, and what should you know before you go? In this mini-guide, we break down everything you need to know about the Nāpali Coast, including the best ways to visit and tips for getting the most out of your experience.

Panorama of the Nāpali Coast, by Remember (Public Domain, source). Click on the photo for a (far) larger version.

What makes the Nāpali Coast so special?

The Nāpali Coast has been battling mother nature since the formation of the island, which geologists estimate to be 4 to 5 million years old. What remains are the jagged, eroded peaks of the volcanic mountain range, shooting straight up to heights of 4,000 feet above sea level, so close to the coast that the peaks seem like lookouts over the ocean.

They say that Hawaiian mountain ranges are like people: The more wrinkles they have, the older they are. This is especially true for those on Kauaʻi, where water has carved massive valleys, small coves and caves, and steep ridges into Mt. Waiʻaleʻale. The extreme weathering is due to the fact that this mountain range is one of the wettest places on earth, as the north shore of Kauaʻi takes the bulk of incoming rain and storms coming out of the north east. 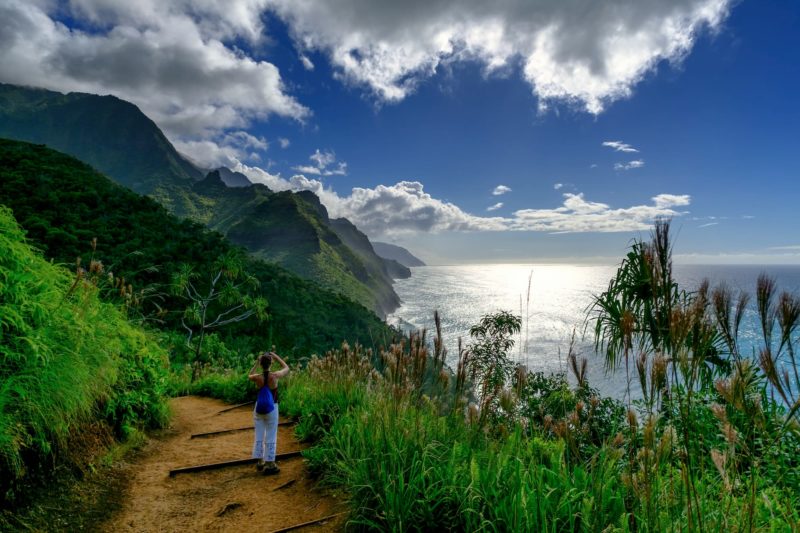 What’s the best way to experience the Nāpali Coast?

There are three main ways to experience the Nāpali Coast:

How to visit by boat

Departing from either Port Allen in the south or Hanalei Bay up north, many companies offer boat tours of the Nāpali Coast, ranging from simple catamaran cruising and snorkeling to zodiac adventure itineraries. We recommend choosing a company that upholds high cultural and environmental standards, such as Holo Holo Charters:

Free cancellation: up to 24 hours before tour

If you prefer to explore under your own power, consider renting a kayak or jumping on a kayak tour with an experienced operator like Nāpali Kayak. Kayak tours take place between April and October when the ocean is calmer. 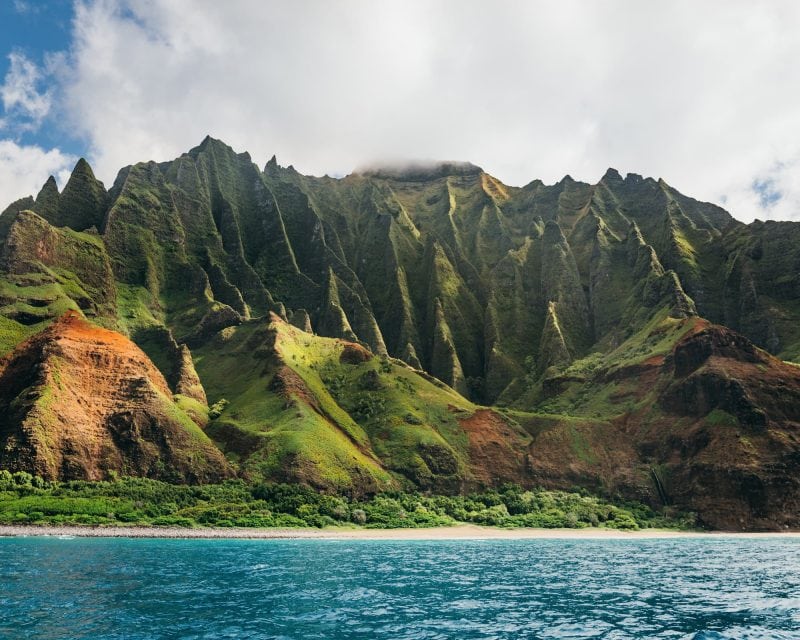 The Nāpali coast seen from the water is one of the iconic images Kauaʻi is famous for. Credit: Hawaii Tourism Authority (HTA) / Vincent Lim

Why go by boat? A boat cruise offers the chance to see more of the coastline than you can on foot, and the option to combine the experience with another adventure, like snorkeling. Boat tours are best in the summer months. Some tours still run in winter, but inclement weather is more likely to impact, cancel, or delay your journey.

How to visit by air

Helicopter tours of the Nāpali Coast run every day on Kauaʻi and often include a flyover of other natural areas, like Waimea Canyon. Tours leave from Līhuʻe Airport, Princeville Airport, and Port Allen Airport. These tours can be extremely pricey – most likely $200-$300 a person for an hour-long flight. Shop for deals, but it’s always best to use a reputable operator with a strong safety record, such as Blue Hawaiian, Mauna Loa, or Sunshine. 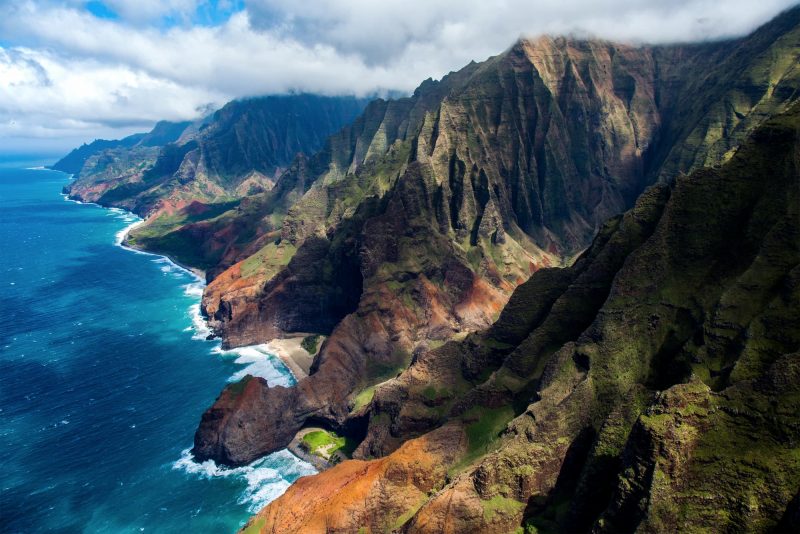 How to visit on foot

The Kalalau Trail leaves from Keʻe Beach and travels 11 miles along the Nāpali Coast. Many backpackers hike the trail to Kalalau Beach, where it is permitted to backcountry camp (with a permit). Competition for permits is tough, but if you can get one, navigating the ups and downs of the coastline provides breathtaking views, and camping on the beach at Kalalau Valley, under the tall, jagged peaks, is as good as it gets. 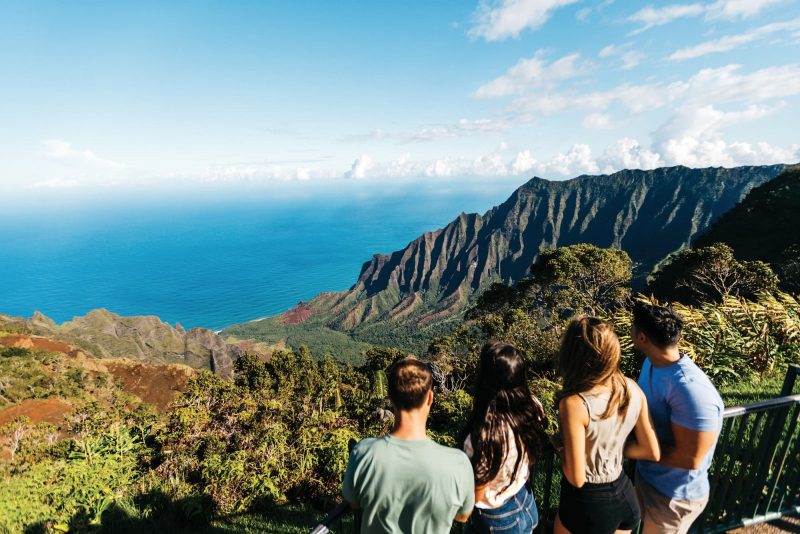 Just two miles into the Kalalua Trail is Hanakāpī‘ai Beach and Falls. Accessible only with a permit (see the gohaena.com website for shuttle + entry pass reservations), it’s a popular choice for day hikers to experience part of the Nāpali Coast, as well as a waterfall. We highly recommend this portion of the hike. While it does have ups and downs and can be slippery, most moderately in-shape people can manage the two miles to Hanakāpī‘ai (going beyond that on the Kalalau Trail is recommended only for advanced hikers, see the following video for some goosebumps).

NA'PALI COAST HIKE: The MOST AMAZING HIKE on the PLANET

Be sure to bring water, snacks, and your camera. It is extremely dangerous to swim at Hanakāpī‘ai Beach, so please stay out of the water. Always keep back from cliff edges and hike with a partner.

Why visit on foot? There’s something to be said about physically experiencing the land. The trail along the Nāpali Coast may challenge you, but there’s nothing quite like roaming – and conquering – the land on foot.

What should you know before visiting the Nāpali Coast?

The Nāpali Coast State Park extends all the way from Polihale State Park in the southwest to Keʻe Beach on the north shore. It’s possible to embark on boat tours from two locations (see below), but it is only at the Keʻe Beach entrance that you can walk into the Park.

One thing that makes the Nāpali Coast truly unique in comparison to other scenic coastlines is that it cannot be driven whatsoever – that is, no roads travel into or out of it. Protected from the environmental impact of cars, roads, and development, the coast has been left to be its wild self.

Recently, in an effort to reduce traffic and improve the quality of life for local residents, Kauai installed new rules and regulations regarding driving and parking on the north shore of Kauaʻi. Most beach parks now require a reservation to be made in advance for both parking and entrance. There’s also a new park-and-ride shuttle that runs from Princeville/Hanalei to the end of the line at Keʻe Beach. Visitors are encouraged to use the shuttle to reduce traffic.

5 Tips for Visiting the Nāpali Coast

Here are our top tips to keep in mind when visiting the Nāpali Coast.