The Waikoloa petroglyph preserve is one of the two petroglyph fields north of Kailua-Kona (south Kohala). The petroglyphs around the trail are scattered like graffiti everywhere you look. Some are graphic (humans, birds, canoes) and others cryptic (dots, lines). Western influences appear in the form of horses and English initials.

Directions to the Waikoloa Petroglyphs:

To get to this field from Kailua-Kona, take Highway 19 north for 25 minutes to the first stop light after the airport, and turn left towards the Waikoloa beach resorts. Continue for about a quarter mile and then turn right at the first parking lot next to the gas station, park and then walk to the right of the station and pick up the Kings trail (also known as the Kiholo Puako trail).

The Waikoloa Petroglyph field is located between the Waikoloa Beach Resorts along the Kings trail. Image adapted from google maps

The petroglyphs are located is about a quarter of a mile north of the Waikoloa Kings Shops, located on the Kings walking trail which runs north and south of Waikoloa for miles. See the satellite image below for details. 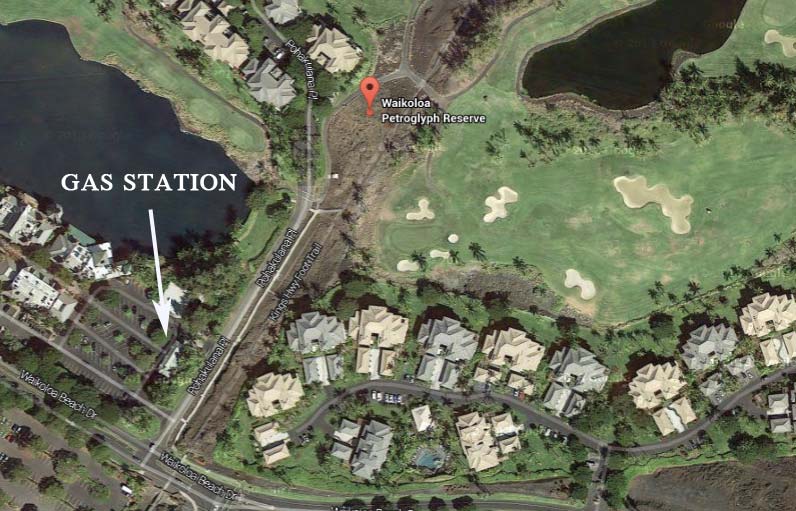 Park your car in front of the gas station of the kings shops, and pick up the kings trail to the left (north). Image adapted from google maps

Petroglyphs offer a unique view into the history of Hawaii – some of them date as far back as to the 16th century! The word “Petroglyph”  comes from the Greek words, “petros” for rock, and “glyphein” to carve, Hawaiians call this form of rock art “k’i’i pohaku“, or images in stone.

Some of the petroglyph images are clustered near historic land boundaries or along foot “highways” through lava fields, but the full reasons for their location and creation remain a mystery. Sadly, development has destroyed many of these treasures–ancient images that escaped destruction by earthquake or lava flow were destroyed during the construction of resorts and golf courses.

Some of the fields however, have been preserved and are accessible by the public. They are a must-see for those interested in the history and culture of Hawaii. When you go, be respectful and stay on designated viewing platforms and paths. Do not touch the rock images or attempt to make rubbings of them–human actions like this destroy works that have endured for centuries. If you are looking for good photo’s, try the early morning of late afternoon, when the slanting shadows offer extra depth and highlight to the petroglyphs.

See our map of Kona for the location of the Waikoloa Petroglyph field.