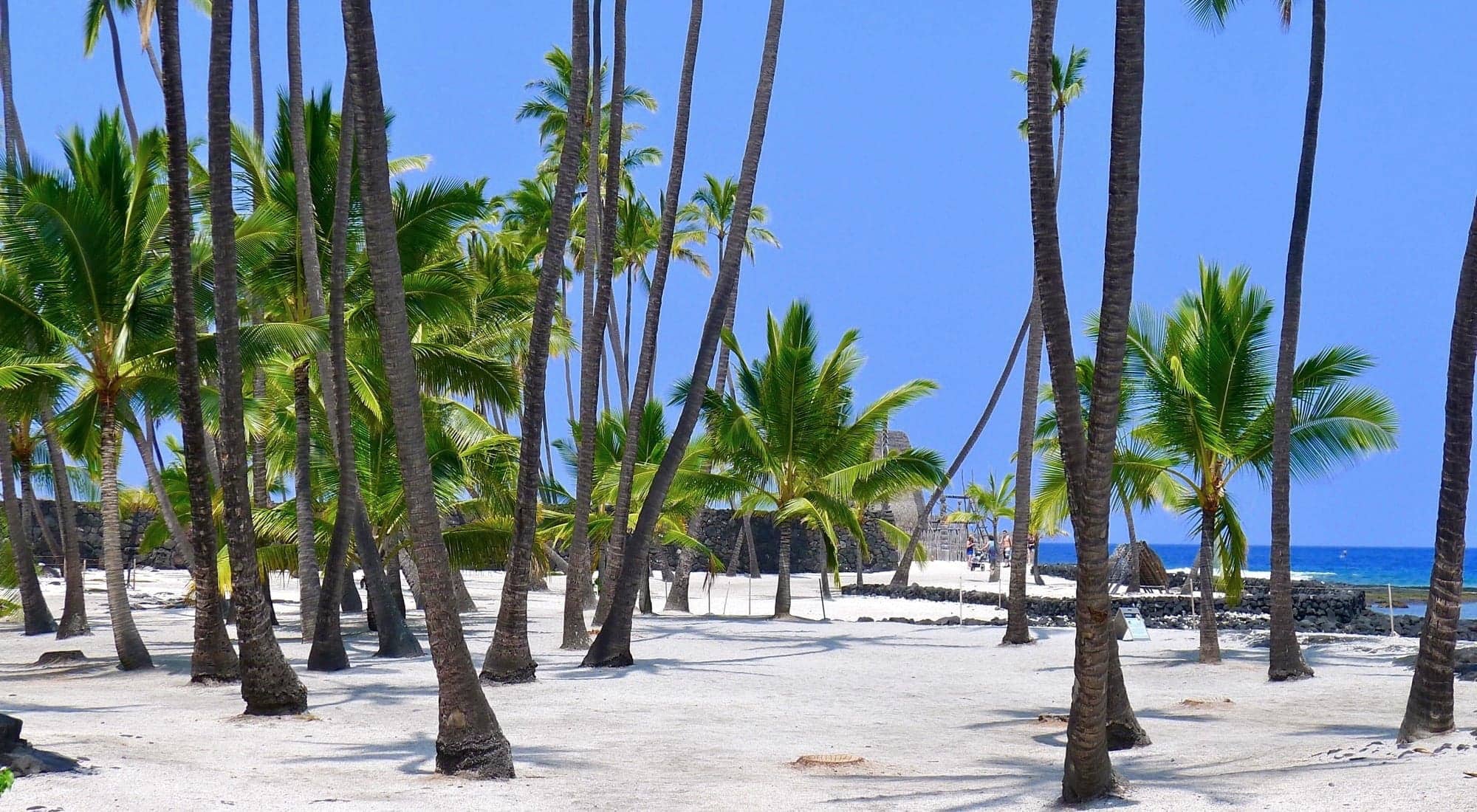 Step back in time and into a piece of living Hawaiian history – Puʻuhonua o Hōnaunau National Historical Park. A tour of this park is one of the top things to do on the west (Kona) side of the Big Island and an excellent way to experience traditional Hawaiian culture.

Use the Table of Contents to skip ahead to the information you are looking for:

Visitors to this special place will notice the peaceful energy and spirit of forgiveness that can be felt throughout the park to this day. For this and many other reasons, visiting the Puʻuhonua o Hōnaunau National Historical Park is one of our favorites on our BIG list of cultural and historical things to do on the Big Island.

Set on the rugged and beautiful south Kona coast, the ‘place of refuge’ or ‘city of refuge’ was a safe haven for those that broke the Kapu laws, which in old Hawaii were punishable by death. If you reached the Puʻuhonua, you would be pardoned by Kahuna and given a second chance at life. A sacred site, carrying the powerful mana of 23 interred Aliʻi chiefs, the Puʻuhonua and Royal Grounds were used by the Hawaiians for centuries.

If you feel adventurous and want to have a quick look at the park this virtual tour of the park by the NPS is worth your time.

Things to do/see in the park + visitor tips

Visitors can walk through the park on a self-guided tour on a 0.5 mile trail. Be sure to grab a park map that corresponds to numbered markers along the trail so you can read about different points of interest (or have a look at page 4 and 5 of the online version here). You can also access a narrated tour by phone that follows the numbered stops on the map by calling (808) 217 9279.

You can easily spend a few hours in the park exploring the views and sights but if you are short on time you can consider only seeing the Royal grounds and Puʻuhonua (see map below). We describe the most important sections / attractions of the park to give you a good idea of what you’ll see / learn while visiting:

Annotated map of the Puʻuhonua o Hōnaunau National Historical Park showing park attractions such as the visitor center, the great wall, the royal grounds, and the Puʻuhonua. Satellite image from Google Maps.

The Visitor’s Center and bookstore is your point of arrival once you enter the park. This is where you can pick up a map for a self-guided tour, and a staff member can answer any questions you have. The bookstore has a collection of excellent reads and some DVDs on Hawaiian culture, history, geology, and legends. The bathrooms are located directly to the left of the bookstore. The Amphitheater where ranger talks are held is to the right.

As you enter the Royal Grounds, you walk beneath towering coconut palms. These trees are part of a royal coconut grove, planted to commemorate chiefs who have passed on.

The Hale o Keawe Temple, guarded by carved wooden Kiʻi, symbolizing Hawaiian gods, is a very sacred site. It was build in the 1600s to house the bones of Keawe-‘Ī-kekahi-ali ‘i-o-ka-moku, King of Hawai‘i Island. After Keawe’s death 22 others were cremated and deposited in the temple along with numerous unnamed warriors. The sacred bones were full mana (spiritual power) that emanated out and surrounded the refuge. Today, the remains of the chiefs rest inside the mausoleum at Mauna Ala on the Island of O‘ahu and Hale o Keawe was reconstructed 50 years ago to help bring Hawaiian history to life. (read more about Hale o Keawe).

The Temple and the Royal Grounds are protected and separated from the Puʻuhonua by a Great Wall, constructed over 500 years ago in the 1500s using uhua humu pohaku, or dry stack masonry with lava rock. Over 80% of the original wall was still intact when this site was reconstructed and restored in the late 1960s. The wall measures up to 12 feet tall, 18 feet wide, and 950 feet long. 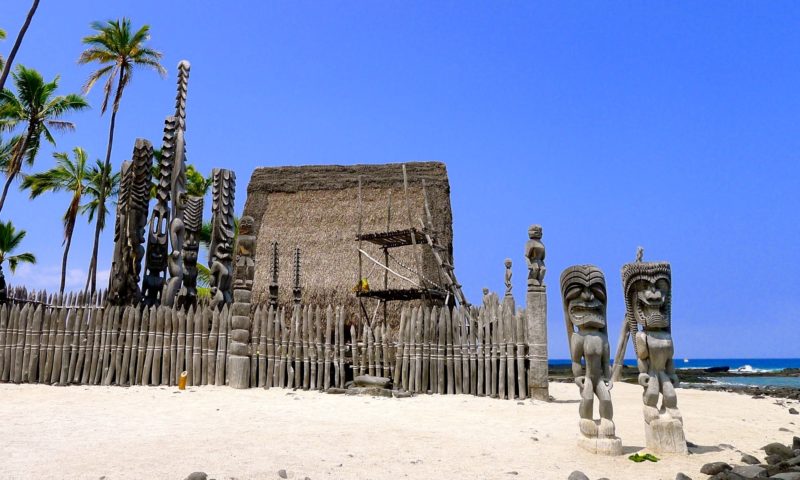 There are many other points of interest inside the Royal Grounds, including Keone‘ele Cove, a canoe landing for Aliʻi, a Hālau waʻa (canoe house), fish ponds, and Kōnane, a Hawaiian strategy game played with rocks that resembles checkers.

The Royal Grounds end at the “Great Wall”, beyond which you can find Puʻuhonua. 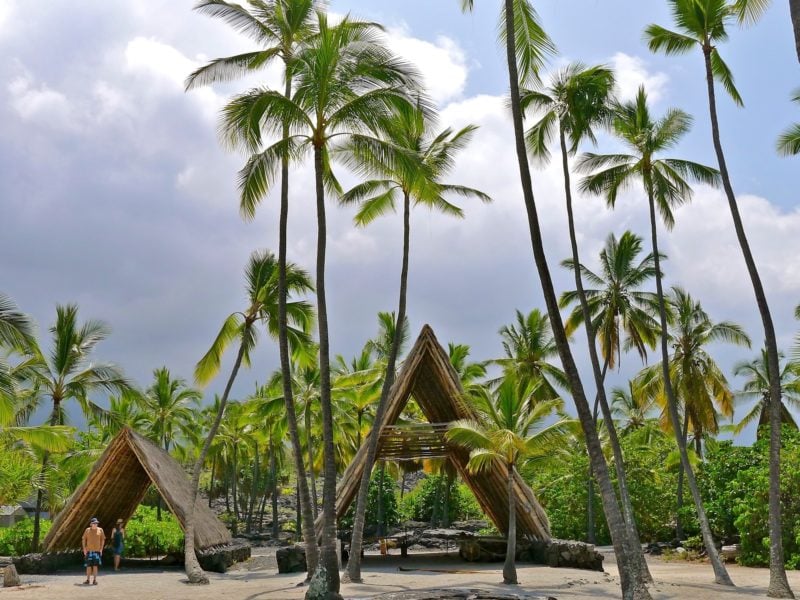 The Puʻuhonua (place of refuge)

Imagine swimming for your life in the open ocean, dodging sharks, currents, and pursuers as a wanted man or woman. You have broken a law in the Kapu System, which is punishable by death. You are headed to the Puʻuhonua, or ‘place of refuge’, where you can take sanctuary and receive a pardon from a Kahuna (high priest). This was the reality of old Hawaii, where a ruling class of Aliʻi (chiefs) managed the island of Hawaii through strict enforcement of Kapu.

The island was divided into six districts, or Moku, each with their own Puʻuhonua. Rather than penal punishment or jail, the old Hawaiian way of dealing with criminals was spiritual.

When you visit the Puʻuhonua, you can walk in the footsteps of those that sought refuge here over the course of centuries, and see where the Aliʻi and Kahuna who pardoned them resided. The Puʻuhonua was not only for those that had broken a law, but a safe place for women, children, and elderly during times of war. As you walk through the Puʻuhonua you will see the foundations of older heiaus (temples), and the Great Wall that separates the Puʻuhonua from the Royal Grounds. 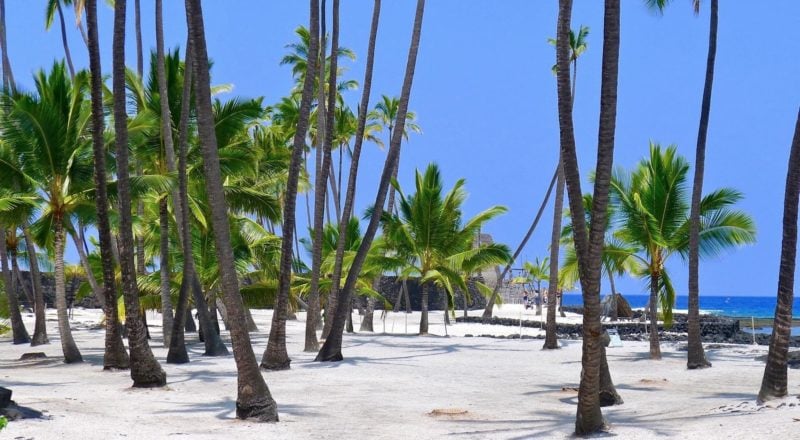 Looking from the Royal grounds through a coconut grove to the Great Wall that shields the Puʻuhonua (place of refuge) part of the park.

Long before roads, Hawaiians used a sophisticated network of foot trails to move from one place to another on the island. The 1871 trail offers visitors a chance to walk back in time on a real trail that leads to the site of an abandoned fishing village. The trail begins behind the Visitor’s Center and passes by Alahaka Heiau and other remnants of old Hawaiian settlement.

The hike to Kiʻilae Village is 2.5 miles round trip and the trail is extremely peaceful and quiet, with sweeping views of the mountains to the left. Medicinal Noni trees grow along the trail, making a natural perch for many birds. A second coastal trail intersects the 1871 trail and can be taken as an alternate route on the way back, where it passes the site of what was once the Keawe House and ‘Oʻmaʻ Heiau. 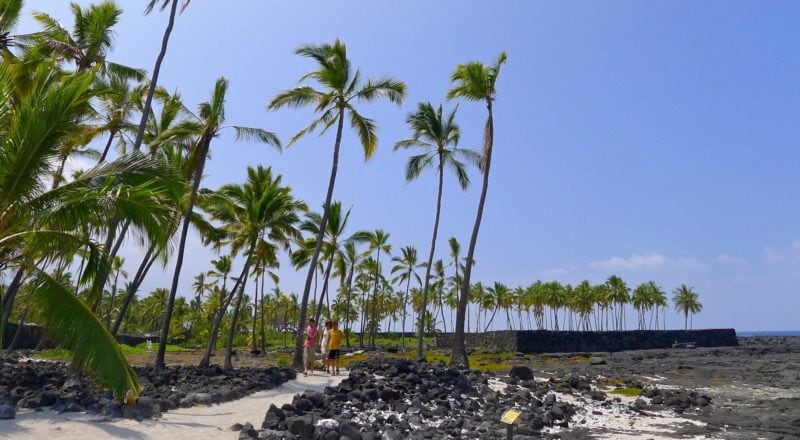 The Puʻuhonua, Royal Grounds, and surrounding historical sites were designated as a National Park in 1961. The wall around the Royal Grounds dates to the 1500s, and the original Hale o Keawe Temple was built in the 1600s. Other remains of heiaus (temples) on the site are believed to date back earlier.

This sacred site was used by Hawaiians for several centuries until the end of the Kapu system in 1819. The rise of Christianity and suppression of the Hawaiian religion meant that the temples were destroyed or allowed to fall into disrepair. In 1961, the area was designated as a National Historical Park. In the late 1960s, the site structures were rebuilt in replica using traditional materials and processes. The Great Wall, which was still 80% intact after 500 years was restored, along with other heiau foundations on the grounds.

In old Hawaii, the Kapu system, a code of strict laws formed the foundation of Hawaiian society and culture. The Aliʻi, or ruling class of chiefs who migrated to Hawaii from Tahiti were believed to have a divine power or ‘mana’ that gave them the right to govern society.

Many of the Kapu laws were designed to control access to certain places and regulate sustainable use of natural resources, as well as maintain social classes. Commoners could not look an Ali’i in the eye, or cast their shadow upon them. Men and women could not eat together, and women could not eat certain foods that symbolized gods like bananas, coconuts, or pig. Fishing during spawning was forbidden.

The punishment for breaking a law was death. The concept of jail, or detaining criminals was not practiced. The only way to avoid punishment was to reach the nearest Puʻuhonua. Within the walls, you were safe. After spending a short time in the Puʻuhonua, you would be pardoned by Kahuna (priest) and allowed to return home.

Surrounding the Hale o Keawe Temple you will notice many Kiʻi, or carved wooden statues of Hawaiian gods. In the Hawaiian language, Kiʻi means ‘images’, and they are a key part of Hawaiian spirituality. Kiʻi are fashioned out of wood or stone and serve as the embodiment of a deity, either akua (gods) or ʻaumākua (personal or family guardians). 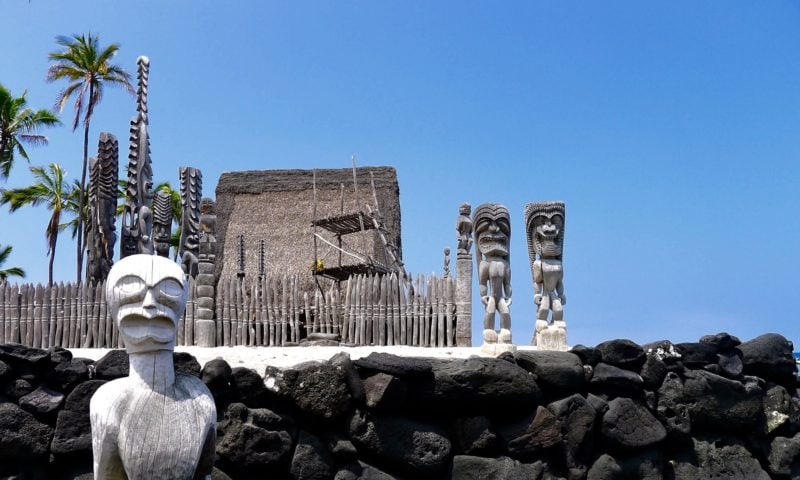 The park is open 7 am to sunset daily and located in Hōnaunau, about 20 miles south and approximately 40 minutes drive from downtown Kailua-Kona. To get there use your GPS or the following route descriptions.

From Kona, head south on Highway 11 for about 20 miles. Turn right at Highway 160 which will take you down toward the coast. The entrance to the park will be in your left, with a large sign and Kiʻi. Travel time to the park from Kailua-Kona is about 40 minutes.

From Hilo, you can head to the park over Saddle Road, and then follow directions from Kona. This route is about 100 miles, with a travel time of approximately 2 hours, 11 minutes from downtown Hilo. An alternate route is to drive around the southern tip of the island, through Volcano National Park, Kaʻu, and Ocean View to Hōnaunau, where you’ll make a left onto Highway 160. This route is only slightly longer, at about 109 miles and approximately 2 hours, 25 minutes of travel time.

Parking is available just inside the park gates. Parking is included in your entrance fee of $15 per vehicle.

The entrance fees for the park are as follows (last updated January 2022):

When visiting keep the following things in mind:

Things to do close to Puʻuhonua o Hōnaunau:

There are many things to do close to the park which makes for some great road trips. We give some tips below about other things to do and nearby restaurants.

Where to eat nearby

There are plenty of good places to stop for a bite along the way back to Kona.