Flying to the Hawaiian islands

Home » Flights to and from Hawaii

A trip to the Big Island almost always starts with a long flight to Hawaii of at least 5 hours.  That plane ticket will be a significant part of the total costs of your vacation and knowing how to find the best flights to Hawaii gives you the peace of mind that you have booked the best flight.

In this guide we  help you decide when and how to book your ticket to Hawaii guided by the following questions/subjects:

How long do flights to Hawaii and the Big Island take?

The most important part of the answer to this question is how many stops you need to get to your final destination on Hawaii. Every stop typically adds a few hours of waiting time to your trip. There are precious few direct flights from the east coast (if you live in New York you are lucky!), and most itineraries include a stop at one of the west coast airports.

Secondly, most flights from the mainland to Hawaii arrive at Honolulu (HNL) on the island of Oahu, from where you will have to board an inter-island flight to the Big Island. This last step often adds a few hours to the total flight time, and it can be worth your while to search for flights going directly to the Big Island.

Summarizing, if your departure airport is one of the big California hubs and you find a direct flight to either Hilo or Kona, you can get to the Big Island in under 5 hours.

How much does a ticket to Hawaii cost?

The best price you can expect to pay for a ticket to Hawaii depends [a] on the distance flown, [b] on the time of booking and [c] the period of your stay. These topics will be covered in the following sections. First, to give you an idea, we list an estimate of the price range for a return flight to Hawaii per continent. These prices don’t take into account sometimes heavily discounted deals, which can cut the prices below in half!

Note that the above prices represent our best guess at the time of the last update (2019), and are indicative only. 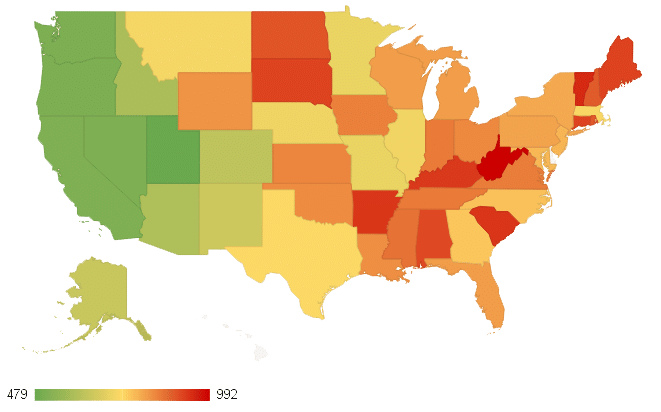 The best value flights in USD for return trips to the Hawaiian Islands in April 2015. Image adapted from Hopper.com [source]

When is the best time to buy a ticket to Hawaii?

This question has two, complementary, answers. First of all, demand for tickets during high season and holidays tends to raise the average price per ticket. Secondly, there tends to be a ‘sweet spot’ as to how much in advance you buy your flights to Hawaii.

How far in advance should you book your flight to Hawaii to find the lowest airfare?

Everybody that once has tried to find cheap tickets knows that ticket prices can vary on a daily basis. This is also true for Hawaii. Luckily, many people have researched how airline companies tweak their pricing policy (for example here, here, here, and here), and it turns out that there is a “sweet spot” to buy your ticket to Hawaii. Take note, however, that the following numbers are average numbers and don’t represent a golden rule.

On average, the best time to buy your ticket to Hawaii is between 21 and 121 days before departure, with the period between 40 and 50 days often mentioned as a golden rule.

The figures mentioned above are valid for domestic flights within the USA. For tickets bought from Europe, Asia, and Australia you need on average to book a bit further in advance.

What are the cheapest months to visit Hawaii?

The cheapest time to fly to Hawaii is during low season. Tickets to Hawaii are in general more expensive in high season and during major holidays like i.e. thanksgiving and Christmas/new year. If you have the luxury to plan your vacation in those months where demand for tickets is down, you should definitely try to do so.

Read more about the high season and the low season on Hawaii elsewhere on our website.

In our opinion, the best time to avoid the crowds and find the cheapest tickets to the Big Island is between mid-April and May and in September and October.

Our favorite airlines that fly to Hawaii

There are many airlines that fly to Hawaii, and picking between them can be as easy as finding the cheapest price for your vacation dates on one of the many price comparison apps and websites available.

Having said that, there are a few airlines that we like just a bit more than the other ones. Our main motivations to like these airlines are good customer service and/or consistent low prices. You can read more about them in the following list of our favorite airlines that fly to Hawaii:

offers a high level of service and sometimes offers good promotions directly via their website. They are a partner of delta airlines and thus are part of the SkyMiles Frequent Flyer program. Find their best prices for your trip directly at the Hawaiian Airlines official website

is also known for its low prices and occasional ticket promotions. Have a look at their best prices for your trip at the Alaska Airlines website.

is known for their low prices. Flights to Hawaii started on March 17, 2019 for the OAK (Oakland) – HNL route, and more routes are added in the following weeks and months from the following four California cities: Oakland, San Diego (SAN), San Jose (SJC), and Sacramento (SMF). The five airports on Hawaii eventually served by Southwest will be Honolulu (island of Oahu), Kahului (Maui), Lihue (Kauai) and Kona and Hilo (Big Island). More details on the Southwest Airlines website, or have a look to see if there are any (package) deals for Southwest.

Inter-island flights (between the Hawaiian Islands)

If you are vacationing in Hawaii and want to see more than one island (and you should if time permits!), you will probably be taking several inter-island flights. These are short (~ 1 hour) flight between the different Hawaiian Islands.

International Airports on the Big Island

Disclaimer: the advice given on this page is a combination of our personal experiences and information gathered online, which is referenced where possible. By its nature it describes an ‘average best strategy’, and we cannot guarantee that following the advice given on this page will give you the absolute lowest price. Please use your own best judgment when trying to find your perfect flight to Hawaii.

Disclaimer 2: We are part of the Hawaiian Airlines affiliate program, which means that we receive a small fee for every completed booking made through the Love Big Island website.  This money comes out of their pocket and the price you pay for the flight doesn’t change. This way you help us cover the costs to host and maintain this website *while* you are booking your trip to paradise. Doesn’t that sound like a good deal? Read more here.

(if you are using an ad blocker to enhance your browsing, please use this link to the Hawaiian Airlines website instead. Mahalo!)