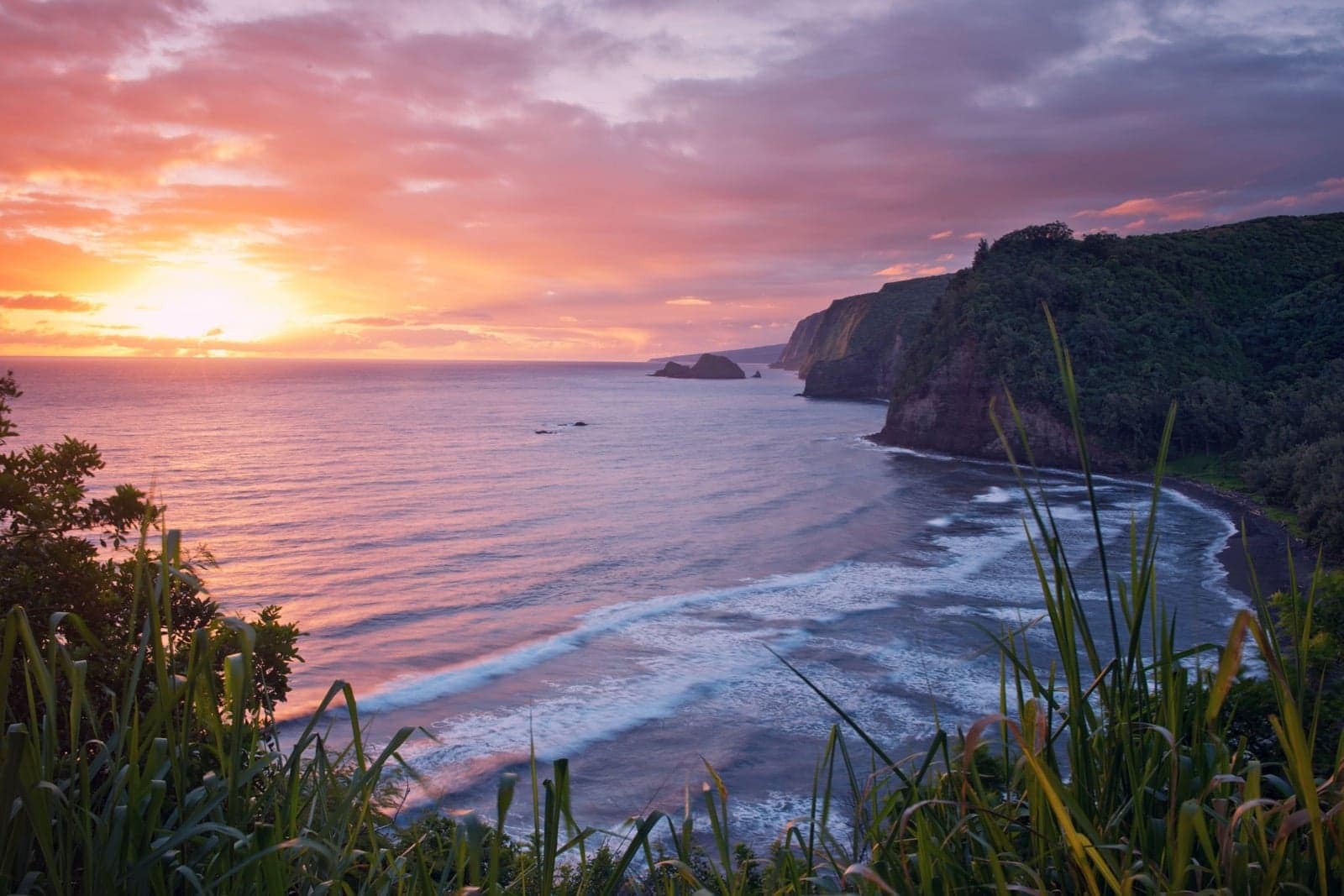 Looking for activities to add to your Big Island itinerary? Below, we offer ideas that range from active adventures to educational museum stops – and everything in between. Most require little-to-no advanced planning but will add significant value to your time in Hawaiʻi.

Consider these ideas as you plan out your days:

We can personally vouch for every item on this list because we often do them ourselves when we have some time on our hands :). This perhaps also explains how many of them have made it into our custom itineraries.

Paddle with Dolphins in Kona Harbor

At the center of Kona Town is the Kona harbor and waterfront. Most visitors take in its beauty and abundantly blue waters from the nearby restaurants and walking path. But we always like to encourage people to get out on or in the water, whether it be via kayak, outrigger canoe, or a simple swim.

Those who get out early in the morning – say, between 7 and 9 a.m. – could be in for a treat. Most mornings, dolphins pods are seen and encountered in the harbor area. If you’re out on a kayak, they may swim right by you for a close encounter. Rent a kayak or canoe on the beach in front of the King Kamehameha Kona Beach Hotel at the Kona Boys Beach Shack. 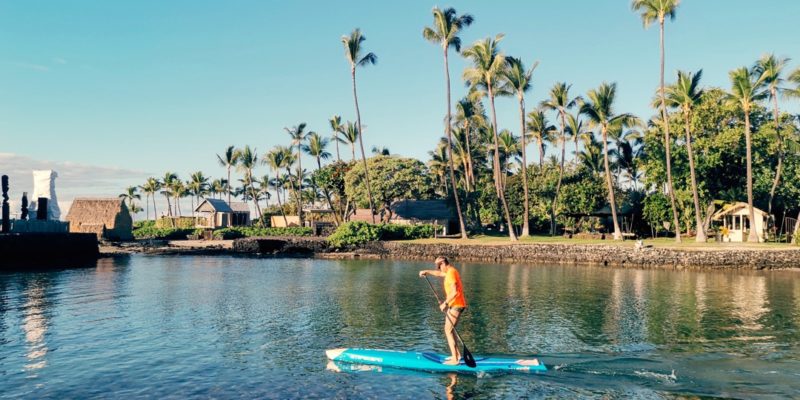 a stand-up paddle boarder is heading out into Kailua Bay.

Get a sunset Mai Tai at the Kona Inn Restaurant

Mai tais pair best with the sunset – period. Almost every local will have a different opinion about which place makes the best one, and we certainly run into that here as well. But, really, is there even such a thing as a bad mai tai?

The version at the Kona Inn pairs especially well with the sunset thanks to its ocean-side seating and its fresh local food.

One of the more popular places for happy hour and dinner in Kona, Huggo’s on the Rocks is a kick-back, cliffside “beach bar” with incredible views of the ocean and a menu full of local fare, like fish tacos, poke, and kalua pork.

We put “beach bar” in quotes because, while it’s not on the beach (it’s on the cliffs), there are several tables toward the front of the restaurant that sit in a sandy pit. There isn’t a bad seat in the house during sunset, but if you can get there early and score one of these tables, you’ll be very happy kicking off your shoes, toes in the sand, looking out over the ocean.

Visit the Hawaiian Vanilla Company for a Tour and Lunch

Did you know that vanilla is one of the hardest plants in the world to grow? It survives in only a thin band around the equator and is a type of orchid – which, if you’ve ever had one at home, you know how easy they are to kill.

The Hawaiian Vanilla Company sits on the beautiful, green Hamakua Coast and offers some perspective on this unique agricultural operation. It’s the only of its kind in Hawaiʻi and runs a farm tour on its property. It also offers a vanilla-pairing lunch.

Hold a Baby Seahorse at the Seahorse Farm

Near Kona Airport, you’ll find the Hawaiʻi Ocean Science and Technology Park’s research campus. It houses a number of small business, most dealing with emerging renewable energy, aquaculture, and other ocean-based sustainable technologies.

Among them is the Seahorse Farm, an organization that raises seahorses for aquariums around the world. Their mission is to end the illegal poaching of wild seahorses by ethically raising them in captivity for sale on the world market. If you can get behind that mission, you may want to pay a visit. On the tour, you’ll get to see how seahorses are hatched and raised, and you’ll even get to hold one, learning about their development, cognitive abilities, diet, and lifespan. 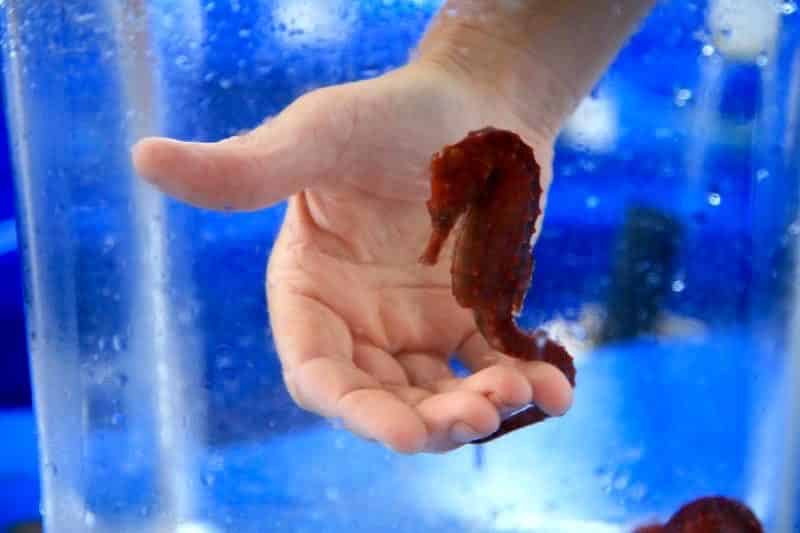 Even if you’re not very physically active, you can still get a solid overview of the Big Island’s volcanic landscape by driving the Chain of Craters Road in the Hawaiʻi Volcanoes National Park.

Running about 19 miles form the Visitor Center down to the coast, you’ll pass by sunken craters and old lava flows in upcountry forests before descending down to the jagged, treeless coastline. There are plenty of pullouts along the way, and if it’s not too hot, the coast is a wonderful place for a picnic lunch. 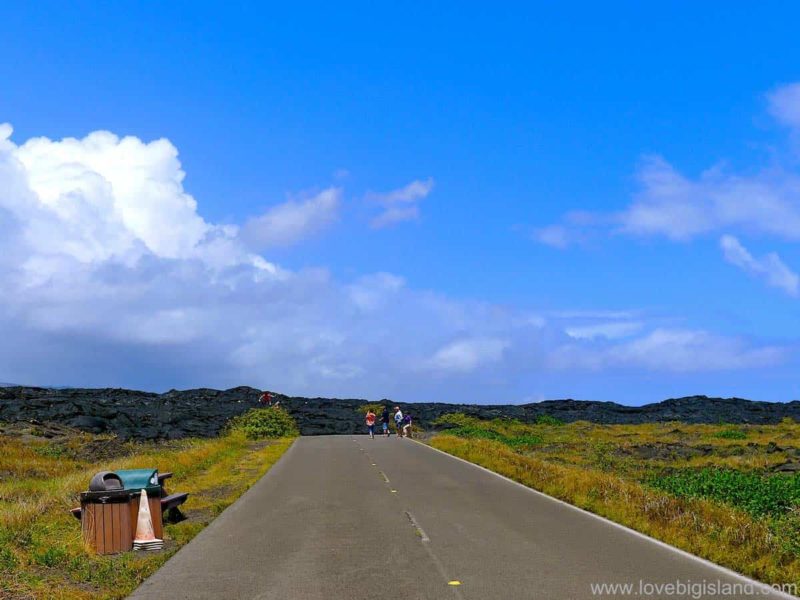 The scenic Chain of Craters road ends after 23 miles at lava flows that covered the road in several eruptions between 1986 and 1996.

One of the most approachable hikes in the National Park is the Crater Rim Trail. It runs along the rim of the crater and is mostly flat, making it a wonderful option for wandering and exploring the different vantage points of Halemaʻumaʻu Crater.

The great thing about the Rim Trail is that it can suit all ability levels and also lead to longer adventures. You can simply walk along the rim and turn back at your leisure, or you can connect to the Kīleaua Iki Trail, which descends down into Kīleaua Iki Crater, or you can take the Crater Rim Trail all the way to the Thurston Lava Tube. 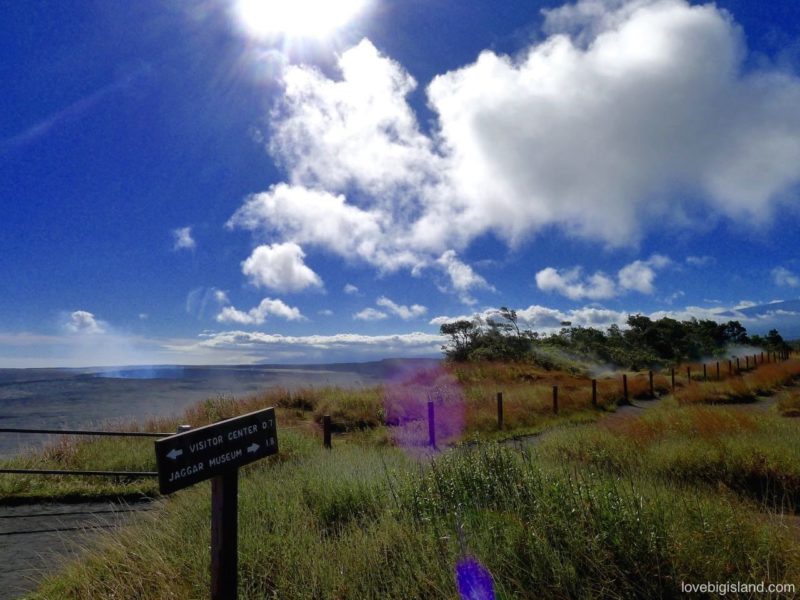 The crater Rim Trial takes you past the steam vents, where ground water seeps down to the hot volcanic rocks and returns to the surface as steam with a distinct sulfury smell.

There’s no farm or factory tour at the Mauna Loa Mac Nut Farm visitor center, but it’s worth a quick stop if you’re looking for some gifts to take home. You can sample upwards of a dozen different flavors of mac nuts there before you buy, and the nuts are grown and processed there on site. There’s also a small ice cream café.

Mac nuts are one of the three big agricultural products produced on the Big Island (along with coffee and papaya), so they make a great gift for friends and family back home. You can get them at the grocery store, but chances are you’ll pass right by the visitor center – it’s located in Hilo on the way to Hawaiʻi Volcanoes National Park.

Have a beer at the highest-elevated brewery in the islands

Big Island Brewhaus sits at 2,670 feet amongst the rural landscape of the upcountry ranch town of Waimea. Because it is out of the way and because it does not can or sell six packs in stores, it’s not super well known to visitors (although they do sell bombers in the grocery store, which are easy to miss).

But, beer lovers will want to check it out. They have a great lineup of beers, including some high-gravity staples like the Overboard IPA and Golden Sabbath.

Walk Part of the King’s Trail

The Ala Kahakai National Historical Trail, more popularly known as the King’s Trail, refers to the walking path that was used in Ancient Hawaiʻi to travel along the coast. It went around the entire island, passing through each district along the way. In other words, it was the superhighway of the past.

Today, much work has been done to restore the King’s Trail and reprise its great history and importance. There are many sections you can try, but if you’re looking for something accessible, head to Anaehoʻomalu Bay. From Queen’s Marketplace, you can jump on the King’s Trail in either direction. 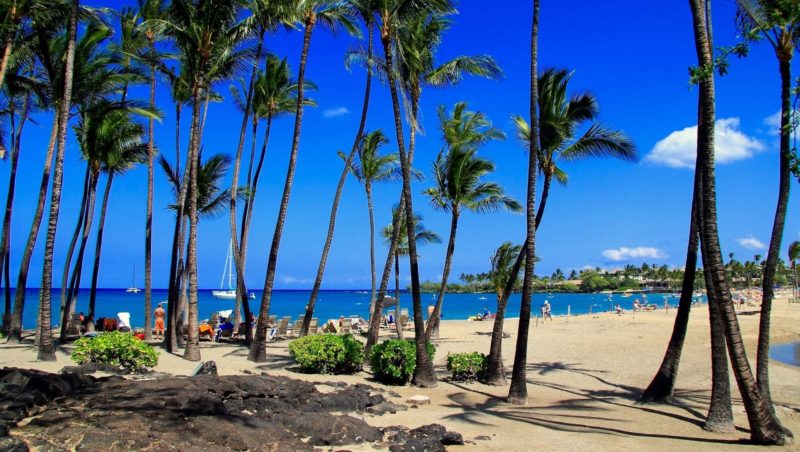 Did you know that Hilo was essentially destroyed by a tsunami in the 1960? Perhaps you’ve heard about the impact of tsunamis on other islands as well. If you’d like to learn more, pop into the Pacific Tsunami Museum in downtown Hilo.

The museum dives into the science of tsunamis and their history here in the islands, showcasing the major events, the destruction they caused, and what’s being done today to help prevent future disaster. Small and humble, you’ll be able to experience the museum in an hour or two.

Another great museum in Hilo is the ʻImiloa Astronomy Center, located on the University of Hawaiʻi Hilo campus.

If you’re curious to know more about the astronomical research that takes place on top of Mauna Kea, and how Hawaiians have been using the sky as their guide for centuries, you might want to pop into this interactive museum. It features rotating special exhibits as well as a planetarium.

The ʻImiloa Astronomy Center of Hawaiʻi in Hilo. Photo credits: Brewbooks on Flickr

Join the free rainforest walk on Monday mornings in Volcano

Those who want a deeper dive into the ecosystems surrounding Hawaii Volcanoes National Park should check out the free rainforest walk held every Monday in Volcano Village.

The guided hike lasts about an hour and introduce you to ecological importance of Hawai’iʻs forests. They are rated as easy and educational. 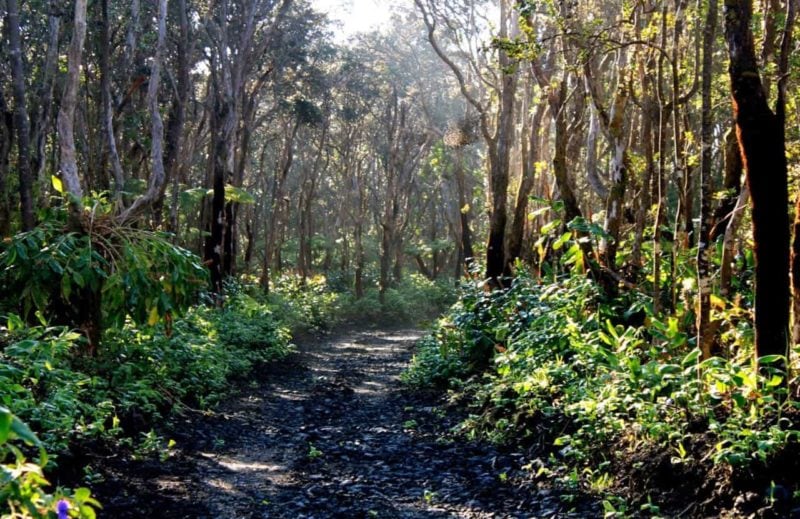 Our favorite time for a walk in Volcano Village is during the early hours of the morning. Image credit: Hawaii Volcano Vacations

Catch the sunrise at Pololū

Early risers reap big rewards in Hawaiʻi because they are treated to fantastic sunrises in the calm, quiet mornings. Some people even make the trek all the way up to the summit of Mauna Kea to see it in all its glory; others hang out around Hilo and watch it come up offshore.

If you happen to be visiting our island during whale season (December – April) this is an especially good morning outing, as you can often see whales in the ocean from the trail. 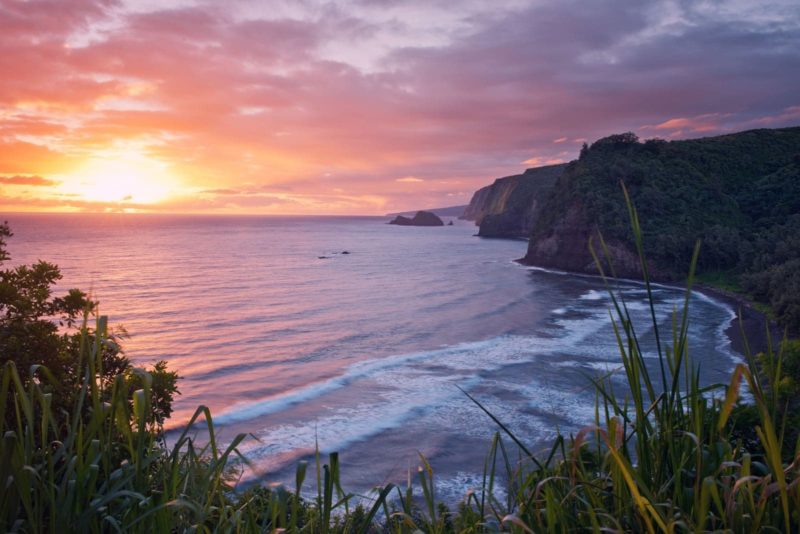 See the silverswords at the Mauna Loa Lookout

Silverswords are a highly endangered plant species that only exist in the high-elevations of the Big Island and Maui (Haleakalā). They grow between an altitude of 5,000 and 10,000 feet and can live for up to 50 years. Most interestingly, they bloom only once in their life – and then die.

To see them on the Big Island, head to the Mauna Loa Lookout in the Hawaiʻi Volcanoes National Park, accessed by the one-lane Mauna Loa road. From there, you’ll find a short trail to a cluster of silverswords.

The road up is coincidentally one of our favorite scenic drives on the island. It takes you across old lava flows and through Koa forests, stopping at the trailhead of the red cabin hike. The unique selling point of this scenic route are the wide views you have of the Hawaii Volcanoes National park and the always changing scenery. 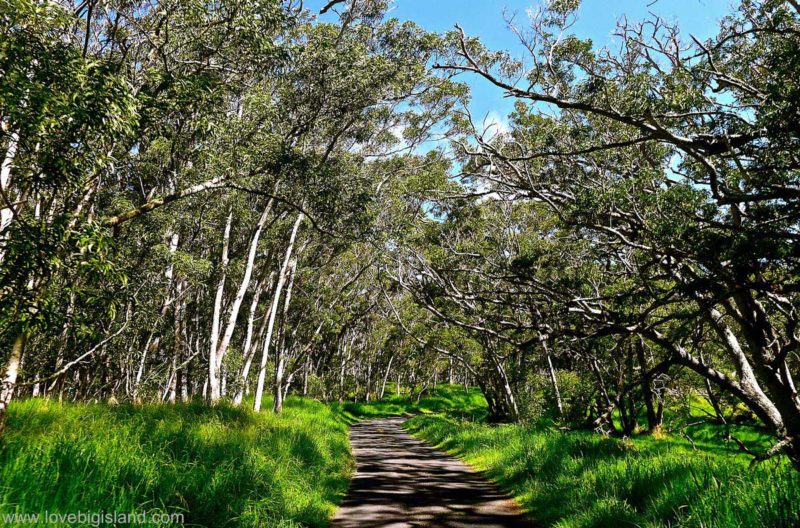 The Mauna Loa access road is an 11 mile scenic road climbing Mauna Loa up to over 6000 ft.