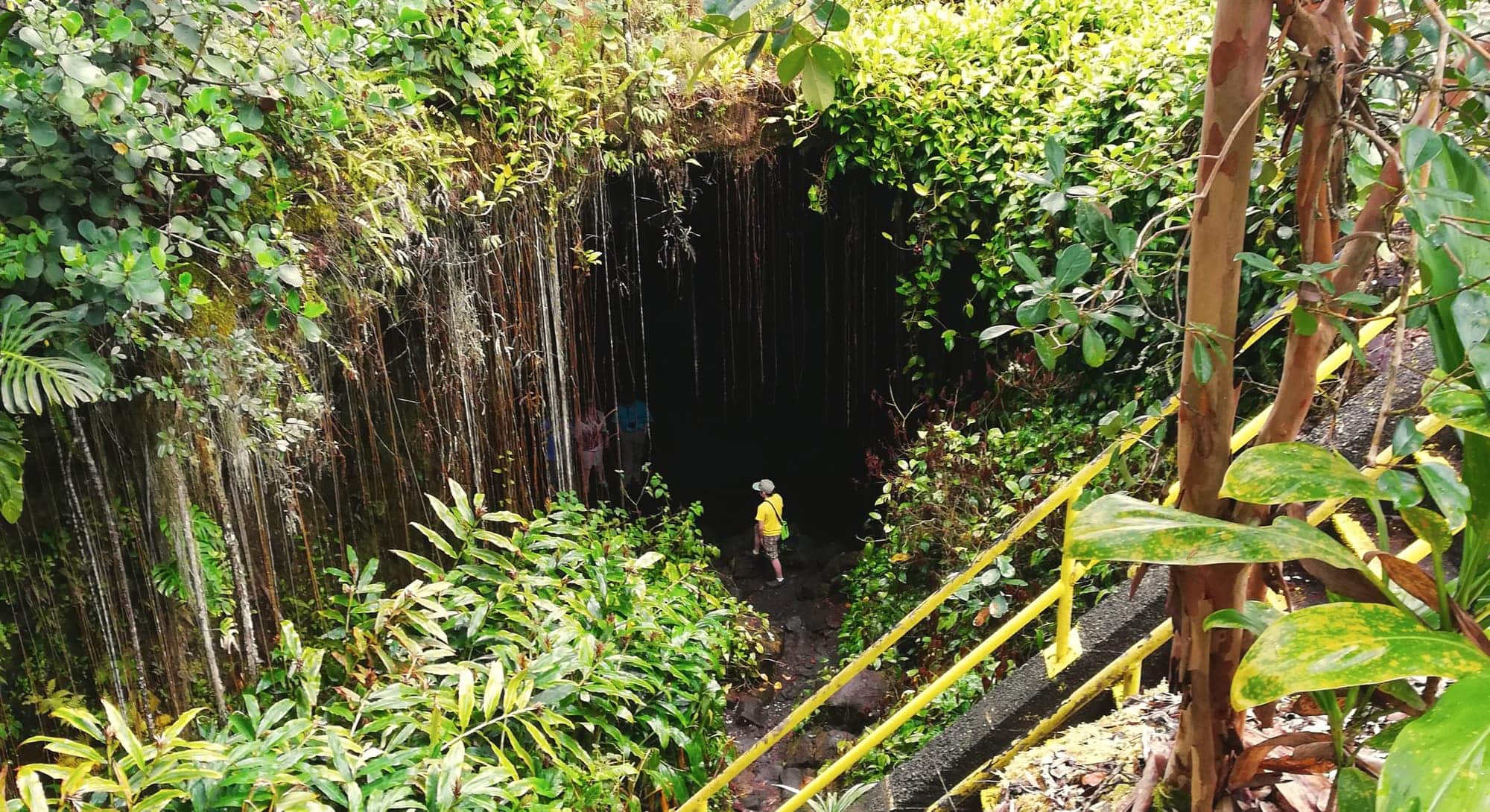 Exploring lava tubes is a great way to get to know more about the volcanic processes that continue to shape the Big Island. Because they are easy to access and have a fascinating formation process (rivers of lava!) they are a perfect family outing, but more strenuous guided tours that include spelunking are also possible.

Please be respectful and use common sense while visiting the lava tubes.

These caves are a limited resource and preserving them will let future generations share in the wonder then can evoke now. Please don’t break off rocks or take loose rocks out of the caves, don’t leave trash, and don’t vandalize the cave walls using spray paint or sharp objects. Mahalo nui loa!

You can find the lava tubes listed on this page (and described in more detail below) on the following map. The color coding of the symbols denotes price (free in lighter green, tour only in darker green) and accessibility (red/orange = not accessible to the public).

Do you want to see more lava tubes? Check out our 9 favorite lava tubes on Hawaiʻi, which includes 2 lava tubes on the Big Island, 3 on Oʻahu, and 2 more on Kauaʻi and Maui.

The preferred name for the Thurston lava tube is Nāhuku, which literally means “the protuberances” in the Hawaiian language.

Nāhuku is the most easily accessible of the lava tubes on the Big Island and is one of the main attractions of the Hawaii Volcanoes National Park. You can explore part of this large 500-year-old cave, that was left behind after a lava flow, with a stroll from the parking lot through the rainforest. The ceilings are high (up to 20 ft in places!), the floor is flat, and there is lighting installed all along the 600 ft. stretch of the cave, which is open to the public. To get to and from the cave you will have to make a short hike through the lush rainforest.

The tube itself is a great introduction to lava tube geology. You can see the solidified drips and waves of once-liquid lava and the beautiful shapes and colors of minerals draining from the rocks. 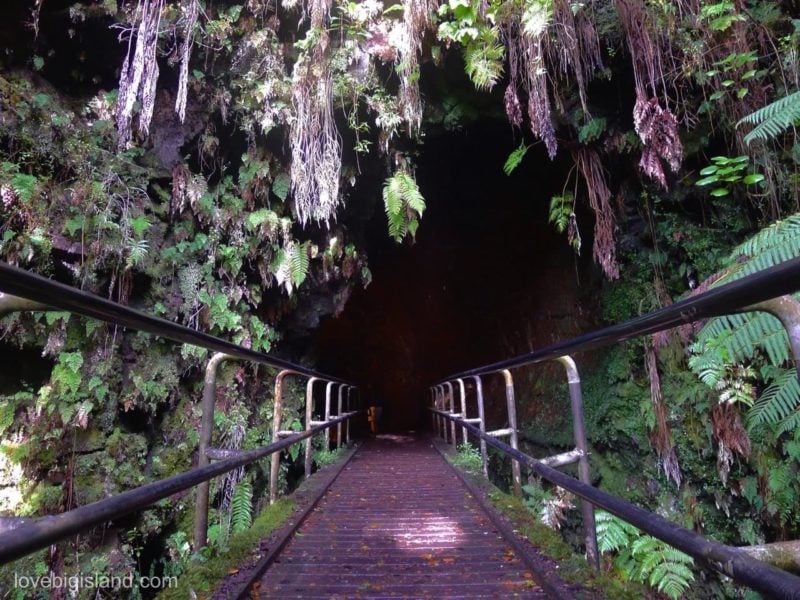 Entrance to Nahuku. This lava tube was “discovered” in 1913 by Lorrin Thurston, a local newspaper publisher. At that time the roof of the tube was covered with lava stalactites which inspired its official name: Nahuku.

Kaumana Caves Park is a skylight in a 25-mile long lava tube that was created by a 1881 flow from Mauna Loa. You can explore the caves a short way in both directions before the lava tube enters private property. There are about 2 miles of lava tube here that are accessible to the public.

Important! Bring a flashlight and shoes with grip if you intend to travel beyond the cave entrances.

These caves are one step up from the Thurston lava tube and if you want you can spend quite some time exploring the dark tunnels. However, a short 15 minute visit will already give you a good feel of how massive lava tubes can get.

To get to the caves you need to climb ~20 ft. down steep stairs, after which you can enter either the left or the right tube. The left starts with a big hall that appears to be a dead end. Look to your right to see a small (~4 to 5 ft) opening that you can work yourself through. The cave opens up afterwards and you can follow it for another ~15 minutes. The cave on the right is, at least at the start, more easily accessible and can be followed longer.

Use caution if you decide to explore the caves past the first few 100 feet, as low ceilings, ledges, and outcroppings make it easy to bump your head. The height of the cave varies from 30 feet to less than 3 feet in some deeper sections. 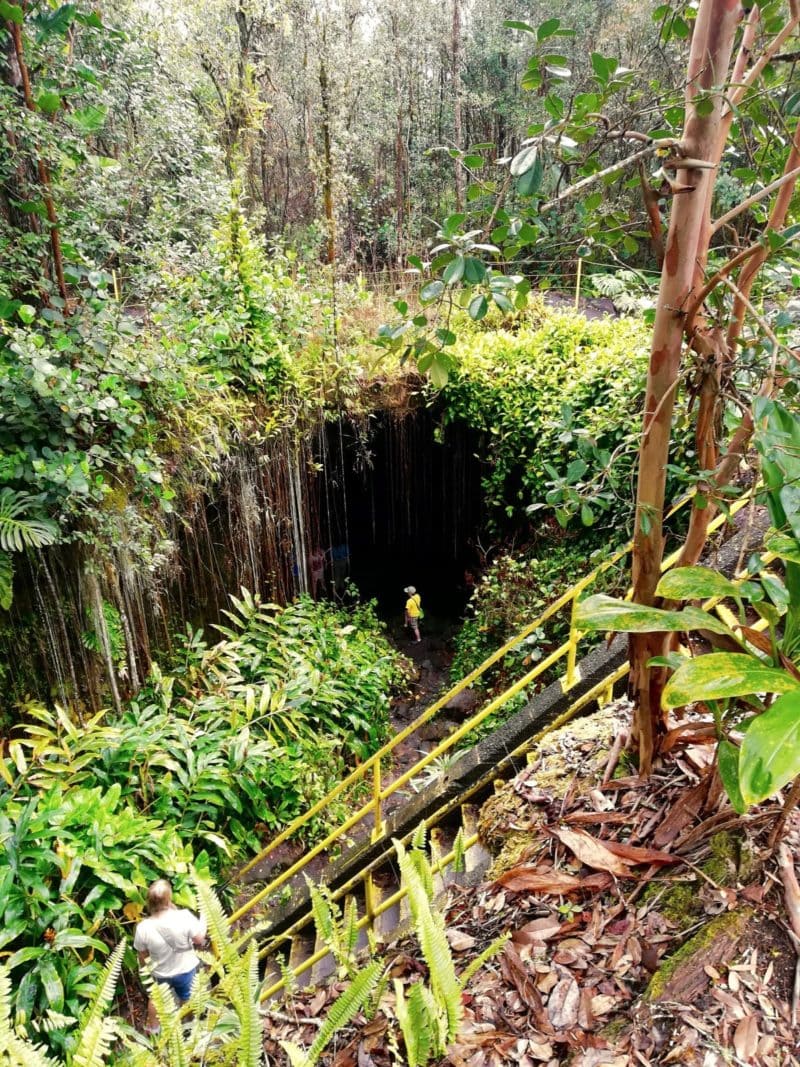 Kazumura Cave is one of the longest known lava tubes on our planet. It was formed during several eruptions of the Aila’au Lava Flow 500 to 600 years ago, on the flanks of the Kilauea volcano, and has many interesting features. These include canyon-like passages due to thermal erosion, multiple level tubes, lava falls, and ‘frozen’ lava lakes, some of which may not be accessible by a simple tour.

In the year 2002 the length of the cave was measured at 40.8 miles (65.6 km), roughly half of which are side branches. The cave drops 3,602 ft (1,098 meters) over its length, also making it one of the ‘deepest’ known lava tubes. Geologically speaking the Kazumura caves are referred to as a “master lava tube” because you can find nearly every type of lava tube feature in this cave.

Kazumura caves are an excellent and extremely interesting place to visit for anyone with a healthy interest in volcanic eruptions, exploring, and learning about lava tube formation.

The Kula Kai Caverns are part of the renowned Kipuka Kanohina Cave System on the southern part of the Big Island.

Good to know: Access to these caves is only possible as part of a tour. See the website below for details.

Access to these caves is possible for casual visitors with a hour-long tour. Longer, more intensive tours, are also available.

The Huehue lava tube is located about 2 miles north of the Ellison Onizuka Kona International Airport at Keahole and was created during the 1801 Huehue flow from the Hualalai volcano. It is clearly visible from Hwy 11, but at the moment we do not recommend that you stop there for a peak because there is no safe way to park your car. 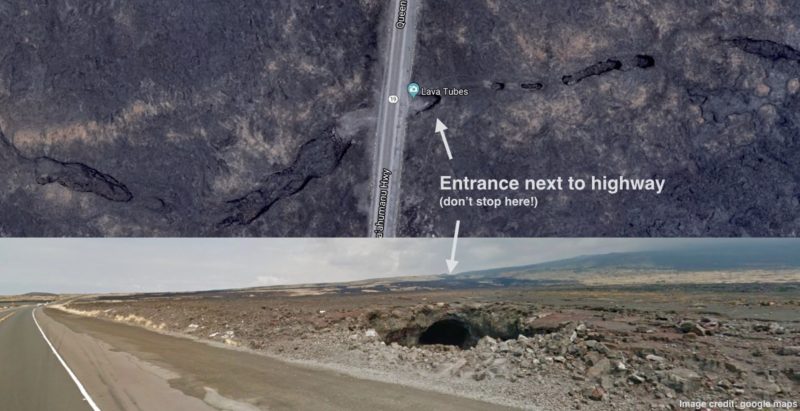 As of January 2019 no-parking signs and concrete barriers have been installed at the lava tube entrance. A no trespassing sign is also posted at the entrance to the lava tube. The state is currently looking into ways to manage access to the Huehue lava tube and we will update this space once more information is available. Until then, please avoid stopping here, but allow yourself to enjoy the view as you pass by.

The lava tubes we have described above are well-known, and are generally safe to enter. There are, however, hundreds to possibly thousands of other lava tubes here on the Big Island, with new ones being created with every new eruption.

Many of these caves are dangerous to get to and unsafe to enter. However, there are a few other places that you can visit:

You can find a lava tube shelter cave in the Kalāhuipua’a historical park on the grounds of the Mauna Lani resort.  The park also contains petroglyphs and extensive fishponds. The lava tube was used as shelter by ancient Hawaiians and there are interesting skylights in the short cave. Bring a flashlight to avoid hitting your head on the sharp ceiling or stumbling over loose rocks.

Read more about visiting these caves on the Big Island Hikes website.

Hualālai is the 3rd active volcano on the Big Island and last erupted in 1801. The slopes of this volcano are covered in native (cloud) forests that hide a decent amount of lava tubes but unfortunately almost all of the upper slope area is privately owned and off limits for visitors without permission.

The only legal way to explore these tubes is to do so as part of a tour which has negotiated access , such as the following organized by Hawaii Forest & Trail:

Volcano and Cloud Forest hiking tour. Explore the untouched cloud forest of the Hualalai Volcano with incredible vistas of the Kona coast up to volcanic craters and climb through a segment of a lava tube.

By: Hawaii Forest and Trail

Free cancellation: up to 24 hours before tour

Lava tubes offer a wonderful world to explore geology, volcanoes, and the unique ecosystems that exist in their dark tunnels. In the following section you can learn how lava tubes form, what kind of geological features you can find in them, and, last but not least, what you should bring along for a safe visit.

Lava tubes are natural conduits through which lava travels beneath the surface and can form during the eruption of a volcano in two possible ways. Lava almost always leaves the crater in channelized flows and the first and most intuitive way of lava tube formation is when the surface of such a lava channel cools down and crusts over:

Simplified diagram showing how a lava tube forms by the crusting over of a lava channel. (source: Bruce Rogers, United States Geologic Survey)

The second lava tube formation mechanism happens at the front of a Pahoehoe lava flow. These flows often progress in an ongoing series of small breakouts of lava ‘toes’ that quickly build up multiple layers high. While the outside of these toes cools down and hardens, the lava continues to flow through earlier-formed toes, particularly those near the center of the flow field. This continued flow causes the walls separating individual toes to become soft again and eventually the toes start to coalesce to form a lava tube. You can see this illustrated e.g. on this website.

All of this is also explained by ranger Dave in front of Nāhuku (the Thurston lava tube) in the following video:

Because lava tubes are a natural consequence of volcanic eruptions, you can also find them on other moons and planets! Here are a few gems of (inter)planetary lava tube trivia:

You can learn more about all these features on the “virtual lava tube website” from which we have reproduced the following image: 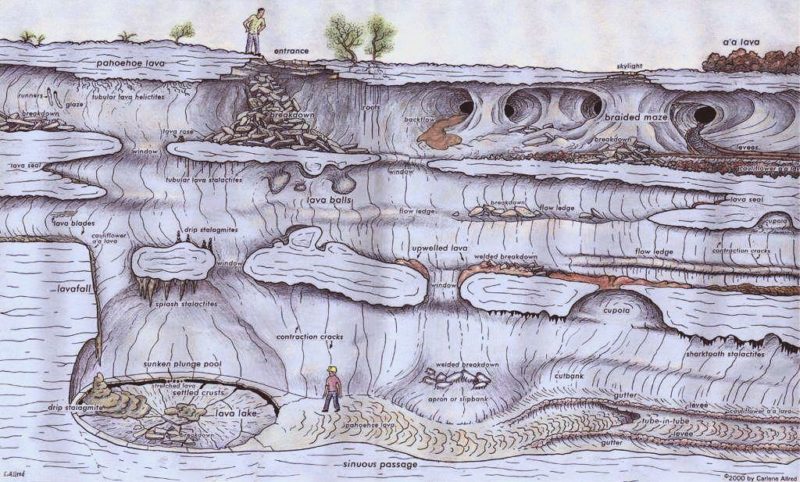 Safety (or what to bring into lava caves and tubes):

Lava tubes are dark, have uneven flooring and ceilings, and can be slippery. Make sure to never explore one on your own, let someone that stays behind know where you are going, and always bring the following items: