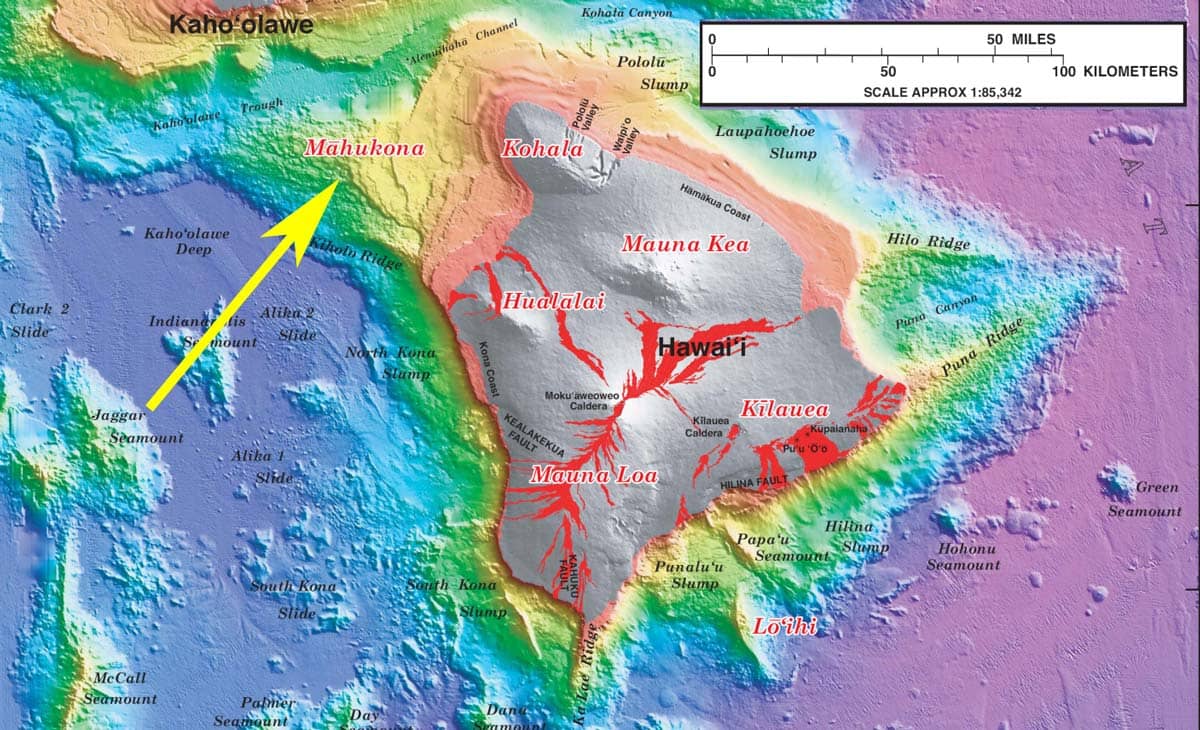 The Volcanic History of the Big Island of Hawaii

Learn about the 1 million year history of the Big Island via surprising facts and trivia of 6 volcanoes. Air strikes, a new Hawaiian Island, mega-tsunamis, and more!

The history of Hawaii is shaped by fire. The entire chain of Hawaiian islands is made out of volcanoes, including a new island (the Lōʻihi Seamount, also known as simply “Loihi”) which is already in the making!

The Hawaiian volcanoes are special because they are very far (3200 km or 2000 miles!) away from the place you normally find them: tectonic plate boundaries. On Hawaii volcanoes are formed because the pacific plate moves with the slow pace of 4 inches (10 cm) / year over a deep, stationary hotspot in the mantle. This hot spot is located beneath the present-day position of the Island of Hawaii (read more about the Hawaiian hotspot). A similar hot spot is responsible for the volcanism in Yellowstone! 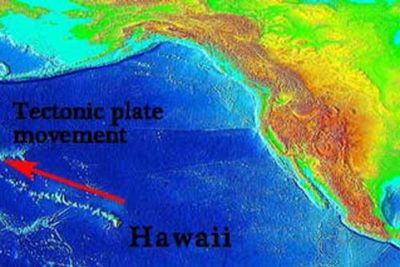 The trail of underwater mountains created as the tectonic plate moved across the Hawaii hotspot over millions of years. Courtesy of the National Geophysical Data Center/USGS)

As the pacific plate moves over the hot spot Hawai’i “draws a line” and you can see by looking at a map of Hawaii which islands were formed first, which island is the most recent addition to the chain (the Big Island), and even where new islands will form in the future!

This hots pot is also indirectly responsible for so much seismic activity that it makes Hawaii the #1 state most likely to feel an earthquake!

The Big Island is the youngest of the Hawaiian Islands. There are six volcanoes that have worked together over the last (give or take) one million years to create the Big Island. These volcanoes formed one after the other and partially overlap. From oldest to youngest their names are: Mahukona, Kohala, Mauna Kea, Hualalai, Mauna Loa and Kilauea. 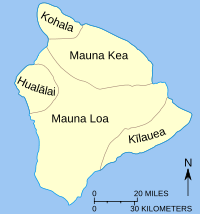 The six volcanoes of the Big Island: Kohala, Mauna Kea, Hualalai, Mauna Loa and Kilauea. Mahukona is below the sea level to the NW of this image. Image courtesy of the U.S. Geological Survey

These six volcanoes are responsible for a whole bunch of impressive world records 🏆 such as:

Three of the Big Island volcanoes are still active: Hualalai, Mauna Loa and Kilauea. Kilauea is the most active and last eruption in 2018, while the other two could erupt at any time. Mauna Kea is dormant, Kohala inactive, and Mahukona has probably never breached the ocean surface. The Big Island, by the way, is not the only Hawaiian island with active volcanoes: the Haleakala volcano on Maui could also still erupt!

Each of our volcanoes has a story to tell, some of which you can find below:

Mahukona is located off the northwest of the coast of the Big Island and is named after the nearby town of… Mahukona. It was the first volcano that started building the Big Island of Hawaii but is also the most recently discovered volcano of Hawaii. Its existence was first predicted by J.D. Dana in 1890 based on a ‘gap’ in the volcanic loa chain (Hawaii exists of at least two different chains, the “loa” and the “kea” chain,  find out more here) but confirmation of his theorized volcano had to wait to 1987.

Mahukona is for Hawaiian standards a very small (±6000 cubic kilometers, more than 13 times smaller than Mauna Loa) volcano that stopped erupting about 350.000 years ago. The newest research indicates that Mahukona never actually breached the ocean surface, but stopped erupting while it was still ±900 feet below sea level.

You can find out more about Mahukona in Garcia et al. (2012) in the Bulletin of Volcanology. 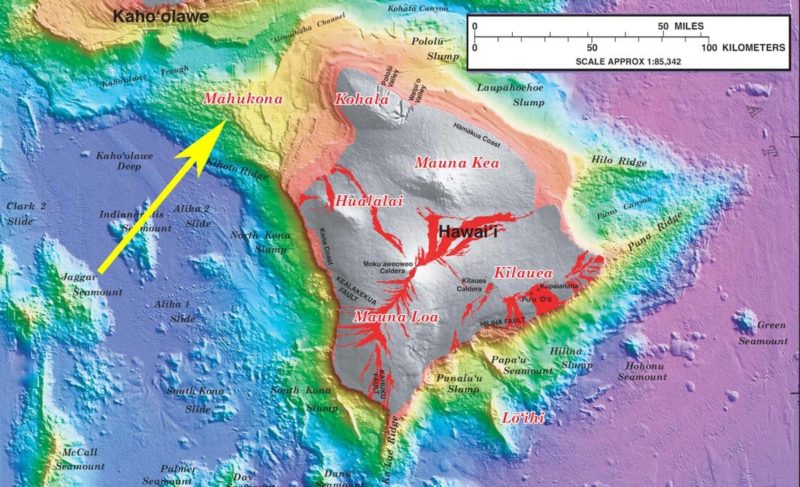 Bathymetric (the underwater equivalent of topographic) map of the Big Island. The Mahukona volcano is indicated with a yellow arrow. Image adapted from USGS 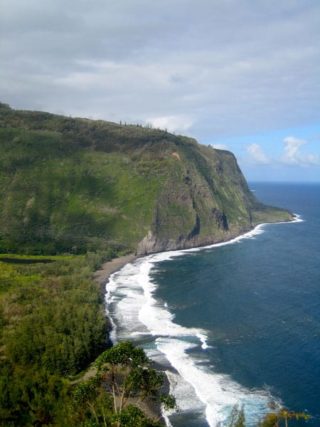 Kohala is the oldest volcano on the island of Hawaii. It is about one million years old but erupted for the last time about 120.000 years ago. Kohala makes up the northern part of the Big Island (think: Waipi’o valley) and now is known for its deep cliffs and green rolling hills. See our guide to the Kohala region if you’d like to know more about visiting.

This volcano used to be a lot bigger but parts its flanks have been crumbling into the ocean for over 100.000 years. When particularly large parts collapse into the ocean the landslide creates a tsunami. Luckily this is VERY rare but it does happen with catastrophic results. Read for example more about this monster tsunami that reached a height of 500 m (1,640 ft)!

Here is some bonus science geek trivia: the Kohala volcano is so old that it experienced – and recorded – the last reversal of earth’s magnetic field 780.000 years ago!

Mauna Kea is over 10,000 m / 33,000 ft tall from base to summit, which is significantly taller than Mt. Everest! Because the Big Island is so heavy, it makes a depression in the ocean floor (much like an iron ball on a rubber sheet). This causes the biggest part of the volcano to sink below the ocean, and leaves a ‘mere’ 4205 m / 13796 ft above the ocean. Still, Mauna Kea is the tallest sea mountain in the world.

Mauna Kea is a dormant volcano and was last active about 4,600 years ago. There are still sometimes (swarms of) earthquakes felt that originate from inside Mauna Kea, but these most likely are due to structural readjustment, and not to volcanic activity. 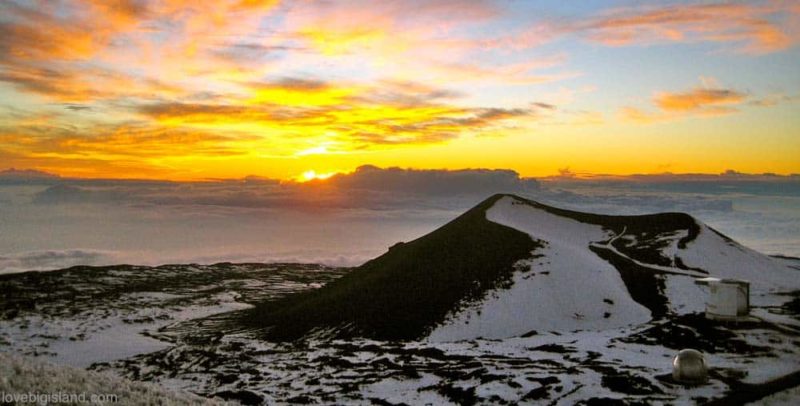 Two telescopes, an extinct volcano and sunset from Mauna Kea.

The Hualalai volcano is probably best known for the black gold that comes from its slopes: Kona Coffee. Hualalai is an active volcano but has not erupted for a while. The last eruption of lava dates back to 1801, and the last damaging seismic swarm of earthquakes (probably caused by a shallow intrusion of magma) happened in 1929.

The Hualalai volcano has historically been very active. Scientists estimate that 80% of its surface is newer than 5000 years. In the 100 years before 1801, there were no less than 6 different vents active on the Hualalai. The Kona International Airport was built on top of a large lava flow coming from one of these vents, and you can see still see lava tubes into this flow when driving between the airport and Kona!

The  slopes of the Hualalai volcano offer GREAT views of the Kona coast and contain beautiful native cloud forests and lots of volcanic features such as craters, fissures and lava tubes.

Unfortunately large parts of the Hualalai volcano are privately vowned and off limits. You can explore the lower slopes by hiking Pu’u Wa’awa’a, but the most interesting upper slopes are only accessible if you have permission from the landowners, for example as part of the “Hidden craters” hike.

Mauna Loa means “long mountain”, and not without reason. It is the largest active volcano on the planet if you look at volume and surface area! The summit rises more than 4 km above sea level, extends another 5 km below sea level, and the whole volcano is so heavy that the sea floor is depressed by its mass another 8 km! Adding the number shows that the summit of Mauna Loa rises 17 km (56,000 ft) above its base!

Mauna Loa is also a very active volcano. It has erupted over 150 times in the last 1000 years, with the last eruption ending on April 15, 1984. Never in its recorded history has Mauna Loa been inactive as long as is the case now. When it erupts again, Hilo might be in danger.

Eruptions from Mauna Loa have often endangered Hilo. One time this led to a spectacular (but futile) show of power by the air force.  Because an eruption in 1935 was threatening Hilo five bombers of the 23d and 72d Bombardment Squadrons of the United States Air Force dropped bombs in the path of the lava in order to divert it away from Hilo. This did little to divert the flow, but, fortunately, the eruption stopped 6 days later and Hilo was saved.

More recently, during the last active phase of Mauna Loa, Hilo was under threat again. Flows from this eruption headed rapidly towards Hilo again but stopped about 2.5 miles (4.0 km) from the outskirts when the eruption ended after three weeks.

Right now evidence is building that the summit of Mauna Loa is filling with lava again. You can check the current status of the Mauna Loa at the USGS Mauna Loa update page or read this interesting USGS fact sheet called “Mauna Loa—History, Hazards, and Risk of Living With the World’s Largest Volcano”.

There is just one shield volcano known on our planet that is larger than Mauna Loa, and that is Pūhāhonu (meaning “turtle rising for breath” in Hawaiian). This ~12 to 14 million yours old (and extinct) volcano is part of the northwest Hawaiian Ridge and is located  511 nautical miles (946 km; 588 mi) northwest of Honolulu.

Recent research (source) puts the size of this volcano at almost twice (!!) that of Mauna Loa. Pūhāhonu is so large that its summit still can be seen above the water, where all other old volcanoes around it have disappeared under water long ago. The summit is now known as the “Gardner Pinnacles“,  and it looks like this:

The Gardner Pinnacles are the only part of Pūhāhonu that is left above sea level. Credit: NOAA.


Good to know: the latest eruption of the Kilauea started December 20, 2020. Read the latest on this eruption and learn how to see it in our guide to seeing lava on the Big Island.

Kilauea is the youngest of 6 volcanoes on the Big Island and has last been in an eruptive state between 1983 and 2018. Kilauea means “spewing” or “much spreading” in the Hawaiian language, and the Kilauea volcano certainly honors this name. Since 1952 there have been 36(!) separate eruptions, and 90% of the surface of the Kilauea volcano is less than 1000 years old! 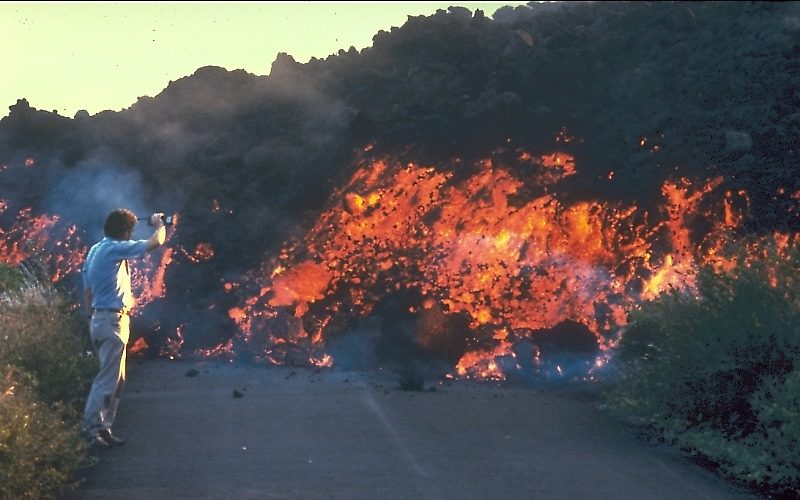 The Kilauea volcano has recently been in eruption between 1983 and 2018. Image credit: USGS

This activity has a profound influence on current day Hawaii.  Kilauea is one of the best (and most reliable) volcanoes in the world to see an active volcano, and the volcano attracts many visitors to the Island of Hawaii. For many of these tourists seeing the lava is the single most impressive event they say to have ever witnessed. During the current eruption about 1 square mile (!) of coastline has been added to the Island.

This creation goes hand in hand with destruction, as many houses, historical sites, and beaches have disappeared under a thick sheet of lava.

Depending on the activity of the Kilauea, you see the active lava with your own eyes. You can hike up to the lava flow or see the glow above the Halema’uma’u crater at night. If there is no access to the lava by foot, you can always opt for a helicopter to fly you over red-hot filled craters.

Lōʻihi is the newest volcano on the Hawaiian chain and lies about 35 km / 22 mi of the southeast coast of the Big Island. The volcano is called “Lōʻihi” (the Hawaiian word for “long”) because of its elongated shape north and south of the summit. The last known eruption of Lōʻihi was in 1996.

With every eruption, Lōʻihi is slowly rising under the ocean surface. Right now the peak of Lōʻihi is about 1 km / 0.6 mi below the surface, and scientists estimate that it will take another 10.000 to 100.000 years before Lōʻihi becomes a ‘real’ island.

If you have not had your fill of volcanoes you can read up on some worldwide volcano trivia. Please leave your own volcano facts and trivia in the comment section if you want to add something to this list!