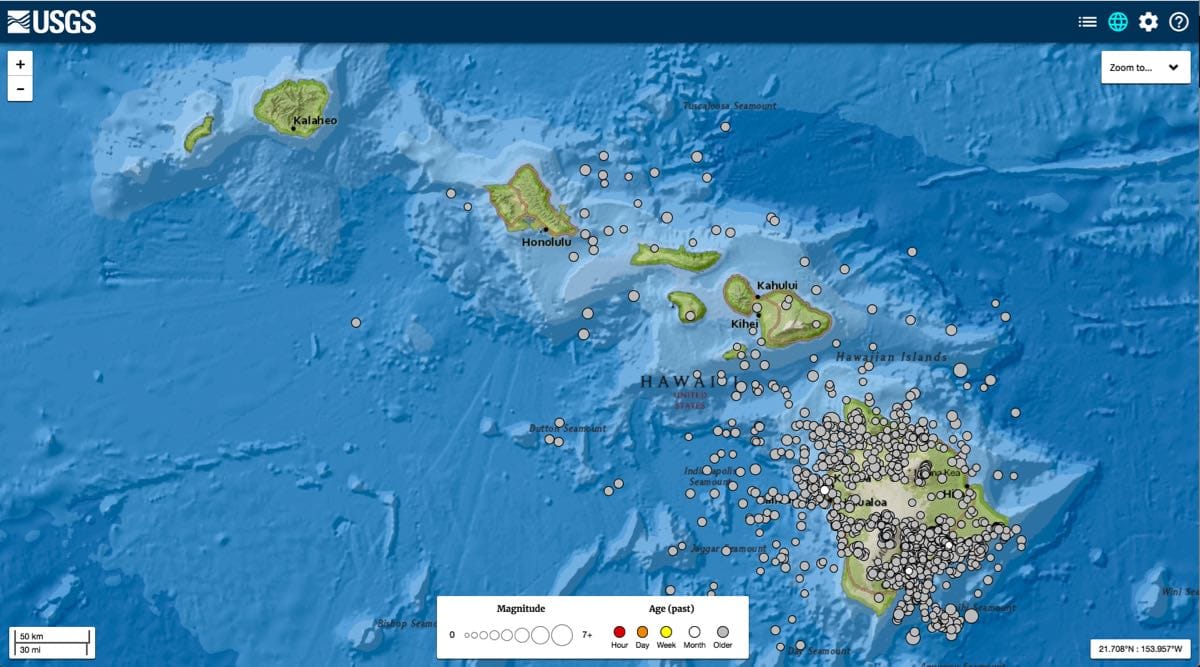 If you ask a random stranger what they think about when they hear “Hawaii”, they will probably reply “paradise”, “ocean”, “volcanoes”, “holiday”, “pineapple”, “beach” or any other tropical paradise related keyword.

However, we bet that nobody will answer “State where I am most likely to feel an earthquake”, and yet that is exactly what Hawaii (also) is! 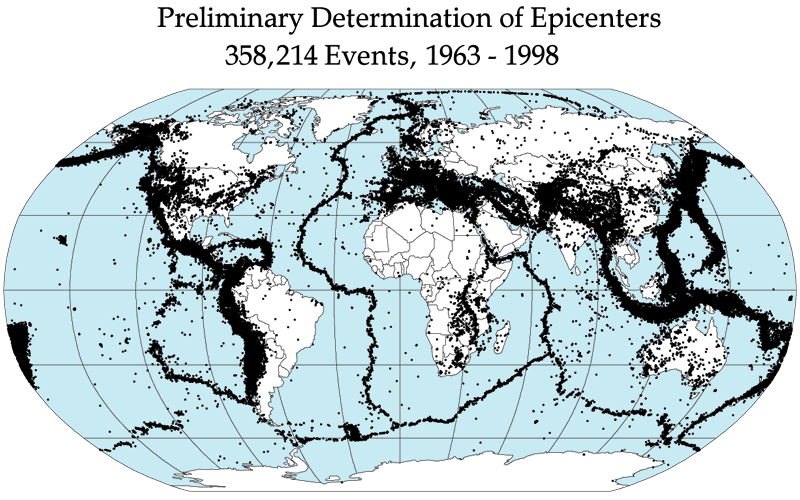 Preliminary Determination of Epicenters of all 358,214 Events recorded between 1963 – 1998. Image credits: NASA. Each black dot represents the epicenter of an earthquake. Notice that Hawaii (on the far left) is totally blacked out by dots.

Hawaii ‘only’ makes it up to #3 state with most earthquakes with 7.3 % of all US earthquakes if you count absolute numbers. This changes however if you factor in the small surface area of Hawaii. We have reworked the numbers given by the USGS National Earthquake Information Center below to show you the earthquake density per state.

This is all shown in the table below, where we have taken the top 5 US states with earthquakes that have magnitudes higher than 3.5 between 1974 and 2003 [source]. As you can see, Hawaii is the uncontested #1 state if it comes to earthquakes!

Where are these Hawaiian earthquakes coming from?

All earthquakes are the result of an abrupt release of energy into the earth’s crust that creates seismic waves. Most earthquakes are caused by ruptures along geological faults, but other causes are volcanic activity, landslides, and even nuclear tests.

Hawaii is far removed from geological fault lines (which makes the Hawaiian volcanoes also something special), but the hot spot below the Hawaiian islands and the volcanic activity caused by it causes enough stress in the earth’s crust to make Hawaii a very active seismic region. All earthquakes in Hawaii are ultimately connected to volcanic activity such as the weight of the volcanoes and pressure from lava inside the volcanoes.

You can see the special case that the Hawaiian islands are in the following animation that every recorded earthquake in sequence as they occurred from January 1, 2001, through December 31, 2015. this animation was made from the following video.

This animation shows every recorded earthquake in sequence as they occurred from January 1, 2001, through December 31, 2015. Credit for this animation: the US NWS Pacific Tsunami Warning Center (PTWC)

The Big Island is Shakin’! 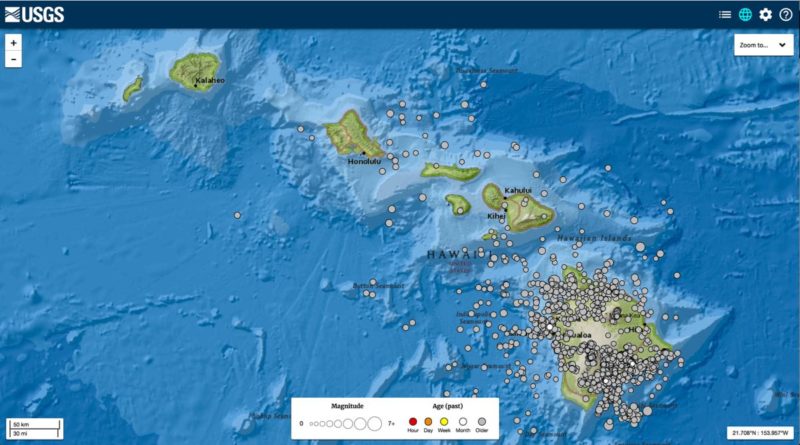 Seismic map for Hawaii showing all 1766 earthquakes with magnitude larger than 2.5 between the year 2000 and 2018. Image created using the USGS earthquake catalog

Are these earthquakes dangerous?

Most earthquakes on Hawaii are small readjustments of earth’s crust, and you will barely notice them. If you think you felt one and want to check if it was an earthquake and what the location and magnitude was, you can have a look at the recent (last 2 weeks) earthquakes in Hawaii.

These casualties are claimed by landslides and tsunamis. For example, during the 1868 earthquake landslides claimed 31 lives, and the tsunami 46.

Tsunamis can be generated both by landslides and earthquakes. Especially landslides are a great threat because they generate gigantic tsunamis when part of an island slides into the ocean. These things don’t happen often, but there is evidence for such a tsunami 120.000 years ago (far before the dawn of man) that reached heights of 1.600 ft! [source]

To not digress too much from the current subject (earthquakes) we keep this for a future post. For now, we leave you with a BBC Nature video about mega-tsunamis in which professor Gary McMurthry of the University of Hawaii explains a thing or two about Hawaii and mega-tsunamis:

We have made several assumptions in this article to keep it readable that may influence our conclusions.

We only count earthquakes with a magnitude greater than 3.5 and treat all those earthquakes equal, which means that a magnitude 3.5 earthquake is counted the same as a 9.0 magnitude earthquake. This is a simplification because of course you will feel a 9.0 earthquake far further from the epicenter than a 3.5 earthquake. We also disregard the fact that earthquakes can be felt ‘over the state border’. This effect will probably slightly boost the numbers of the states next to a seismic active state, but not significantly.