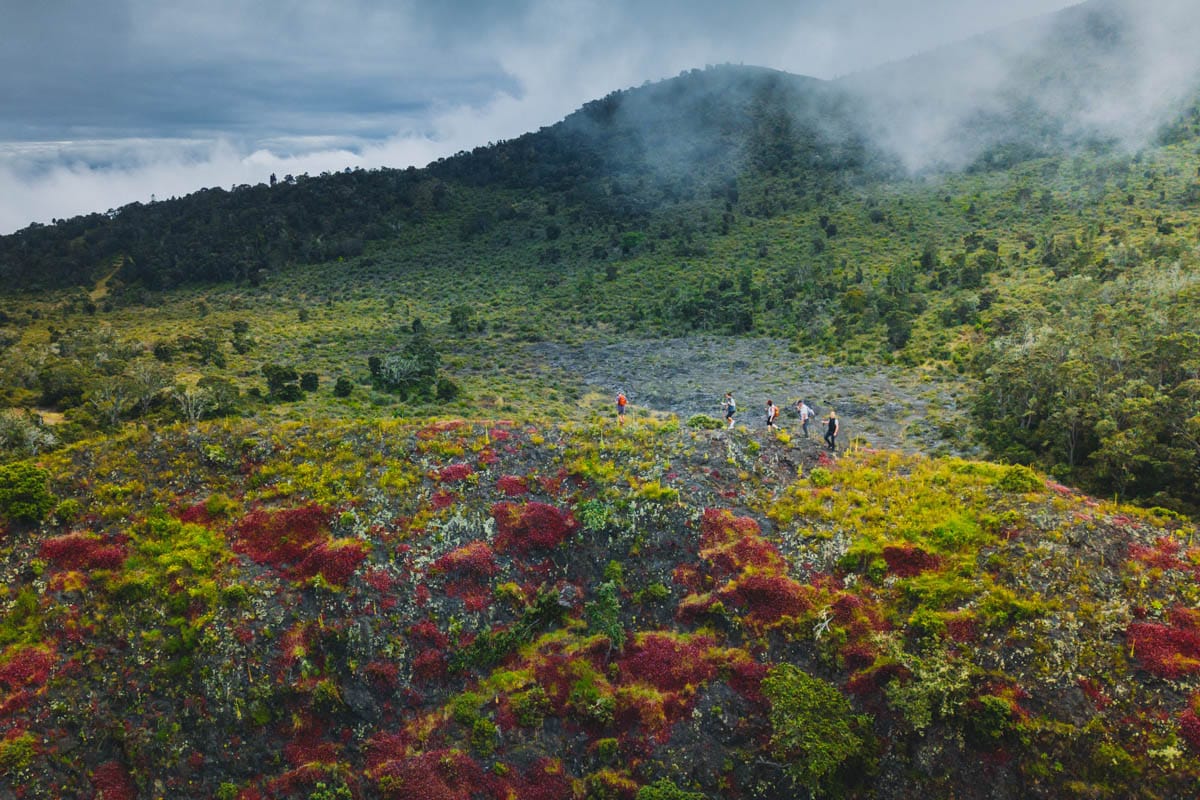 A Volcanoes + Hiking tour by Hawaii Forest and Trail. Back to all Big Island tours.

Tour Summary: Volcano and Cloud Forest hiking tour. Explore the untouched cloud forest of the Hualalai Volcano with incredible vistas of the Kona coast up to volcanic craters and climb through a segment of a lava tube.

Important: Guests on this tour should be able to hike on uneven or rocky terrain for approximately 3.5 miles.

Read more: about volcanoes in our Big Island volcanoes guide.

Private Option Available: The Hidden Craters Hike is also available as an “Ohana Outing”. This private option is tailored to small to mid-sized parties who would like a private experience but do not necessarily need all the “bells & whistles” of a fully customized private tour, and is priced at $1,400 for up to 4 people and $105 for additional guests. Maximum 10 guests per van.
Book as an Ohana Outing

Explore the misty Kona cloud forests and hike to a hidden crater on private lands on the Hualalai volcano. You will be taken off-road by your expert interpretive guide, drive through multiple locked gates, and then proceed by foot to a 6,500 foot elevation to see the stunning sights of black lava flows and native dry land forest.

The landscape you will explore  was created in 1801 during the Kaʻūpūlehu eruption and boasts magnificent coastal viewpoints and stunning lava formations such as a 200 year old lava flow, spatter cones, fissures, collapse pits, and a lava tube which you get to explore yourself!

The cloud forest is quiet and serene, and are known to be a great spot for bird watching.

Why is this tour a local favorite?

his hiking tour provides unique access to volcanic sites on the upper slopes of the Hualalai volcano.  You can see Mateo, one of the expert interpretive guides that lead this tour, explain why the hidden craters hike is one of his favorite tours in the following video:

History of the Kaʻūpūlehu Crater

Hualalai is the westernmost of the three active volcanoes on the Island of Hawai’i and volcanic eruptions have occurred on average every few hundred years from its summit and rift zones. The Kaʻūpūlehu Crater formed during the last eruptive episode of the Hualalai volcano at the beginning of the 19th century from multiple vents. Many flows were produced during this eruption but only two of these were active enough to reach the ocean: the Hu’ehu’e flow (the one that you cross while driving between Kona and the airport) and the Ka’upulehu flow (coming from the Kaʻūpūlehu Crater).

Fun fact: These eruption took place slightly more than 20 years after initial contact with the Western world. Life was different then, which is interesting to reflect upon when visiting the crater.

Hawaiians still lived in villages at the Hualalai shoreline and labored in up-slope agricultural areas. Fishponds, a unique Hawaiian inventions for aquaculture, were common along the coastline. And, last but not least, Hawaii was still independent and was ruled as a monarchy under the leadership of Kamehameha.

Read more about the Hualalai eruptive history in this 1996 USGS report titled “The most recent eruptions of Hualalai Volcano, Hawai’i: an annotated bibliography”

Hawaii Forest & Trail is a highly respected local tour company that has operated on the Big Island since 1993. They have gained access to private and restricted lands and are widely recognized as a tour company that has passionate and knowledgeable interpretative guides, all of which translates into consistent stellar reviews from their past guests.

Hawaii Forest & Trail is fully certified by the Sustainable Tourism Association of Hawai’i. This means that their tours are eco-friendly, culturally educational and operate as sustainable as possible.

The HFT staff are picked to have strong academic backgrounds in biology, geology, Hawaiian culture and history, and extensive natural history field experience. It’s not enough for the guides to simply “know things”, they must also have a real passion for Hawaii’s natural world and enthusiasm for sharing it.

Giving back to the community

The vision of Hawaii Forest & Trail is to share the splendor of Hawai’i and inspire a deep connection with our natural world. They donate a small amount ($1 per guest) to a fund that makes donations to non-profit organizations whose mission and work aligns with at least one of the following criteria:

It is the intent of the fund to give preference to entities who are based or whose work is performed in the communities where they operate tours.

Although the risk of COVID-19 can not be eliminated, Hawaii Forest & Trail takes the following steps to mitigate risks:

Hawaii Forest & Trail has implemented new Health and Safety Policies based on guidance and requirements by the State of Hawaii and CDC.  The following requirements will need to be met in order to join us:

We are affiliate partners with Hawaii Forest and Trail meaning that we receive a percentage for each successful booking made through our website. This happens without any additional charge to you! (read more on the use of those links on our website here).

By booking tours through our website you support LoveBigIsland.com and help us to provide you and future visitors with free and high quality information about the Big Island. Thanks, you guys are amazing!