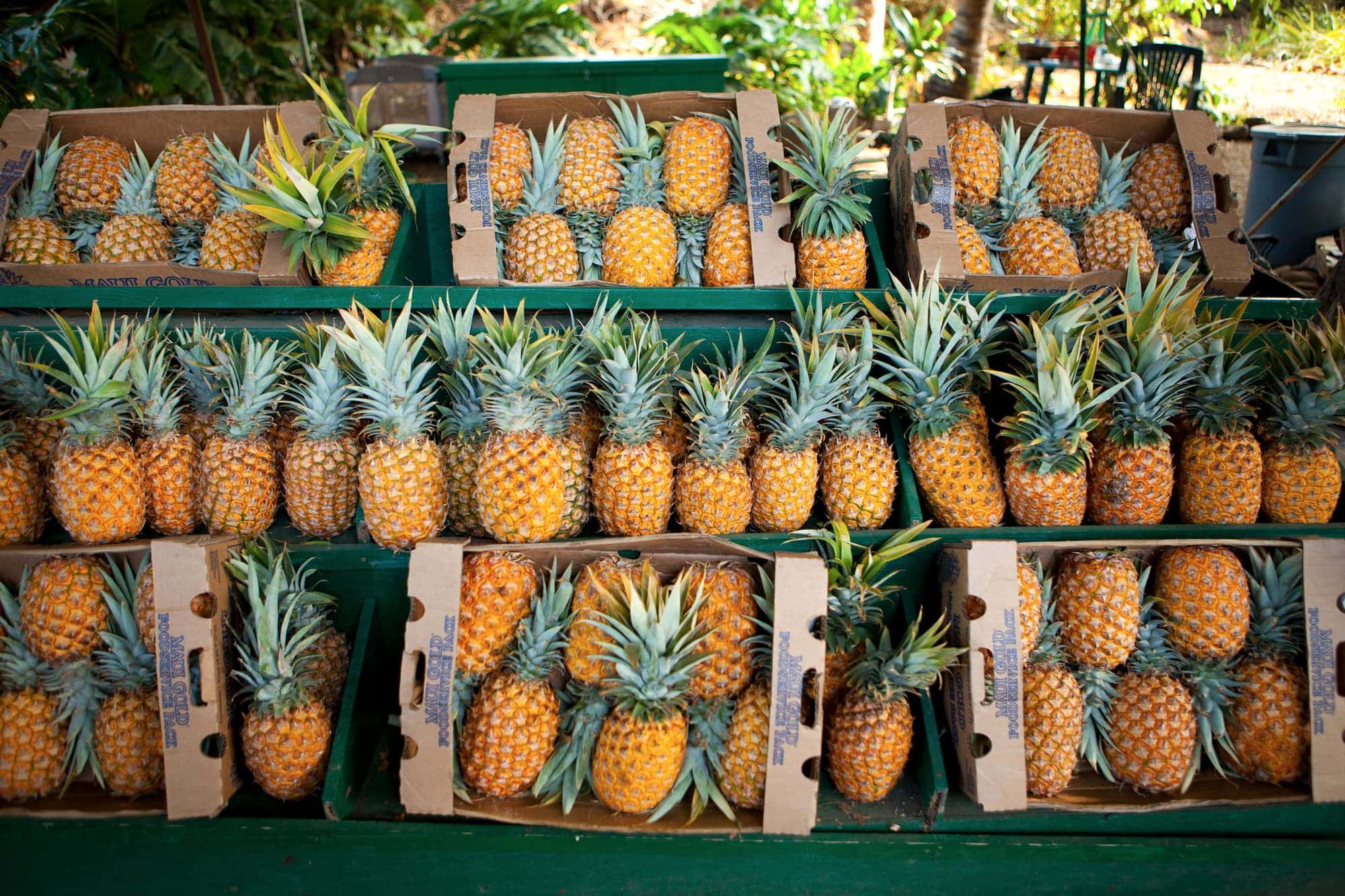 Ask anyone what they think when you say “Pineapple”, and they will almost certainly say “Hawaiʻi”!

Pineapples have indeed for a long time been a symbol of Hawaiʻi but they are not native to the Hawaiian islands. Pineapples can be traced back to their origin in South America,  and are linked together with Hawaiʻi because of the large pineapple industry that was build on Hawaiʻi in the early 1900s. For a while, Hawaiʻi supplied over 80% of the world’s output of canned pineapple!

The scientific name for the pineapple is “Ananas comosus“. In Hawaiian, a pineapple is called “hala kahiki”  because of their resemblance to the local fruit “Hala”.

In our following definitive guide to pineapples in Hawaiʻi you will:

#Pineapples originate from #Brazil and came to #Hawaiʻi because they prevent scurvy! #Trivia #Facttwitter shareclick to tweet

Not that you need any extra reason to like pineapples even more, but just in case: 14 interesting things that you may not have known about our favorite fruit:

History of the Pineapple in Hawaiʻi

Pineapples come originally from South America, most probably from the region between South Brazil and Paraguay. From here, pineapples quickly spread around the continent up to Mexico and the West Indies, where Columbus found them when visiting Guadeloupe in 1493 [1]. Columbus then brought the pineapple back to Europe, from which it later made its trip to Hawaiʻi.

Pineapples proved to be an exceptionally good fruit to bring on long sailing voyages because they help to prevent, just like oranges, the often lethal disease scurvy [2]. As a side note: the mix of pineapple and sand also is a great cleaning agent for the large wooden ships used to cross the oceans.

When exactly the first pineapples arrived in Hawaiʻi is not certain. It is probable that they arrived together with the earliest European visitors to the Hawaiian Islands. The first documented claim of these early visits was by the Spaniards in the 16th century (source [3] or [4]). For the astute reader, that is more than 2 centuries before the arrival of captain James Cook! Since pineapples were such a popular fruit to take on long transatlantic voyages, any ship arriving in Hawaiʻi may have brought some of these fruits along with them. 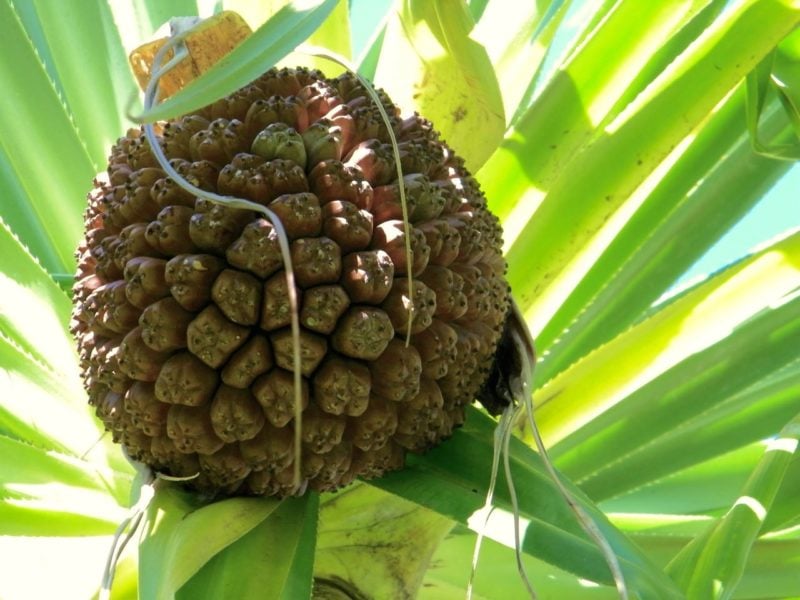 The resemblance of the Hala fruit to pineapples is the reason why pineapples are called “Hala Kahiki” in Hawaiian. Source: Hala fruit by Frikitiki and is licensed under CC BY 2.0

After their first arrival it took them a while to become the great success they are now. Two technologies were essential for the pineapples success in Hawaiʻi. The first one is the development of ocean steamers which made the transport of perishable fruits viable. The second one was the development of canning. Canning made it easy to harvest the pineapples ripe and to preserve their (great!) taste for customers all over the world. The first steps into the commercialization of pineapples were taken in the 1880s, but things really picked up after James Drummond Dole (do you recognize that name?) entered the pineapple world in 1903.

By the early 1960s, Hawai’ì supplied over 80% of the world´s output of canned pineapple. This golden period did not last long though. Growing pineapples became cheaper in other countries and just 20 years later, in 1983, the last big Hawaiian cannery folded. Today, 75% of the world’s pineapples come from Indonesia, Thailand, and the Philippines. 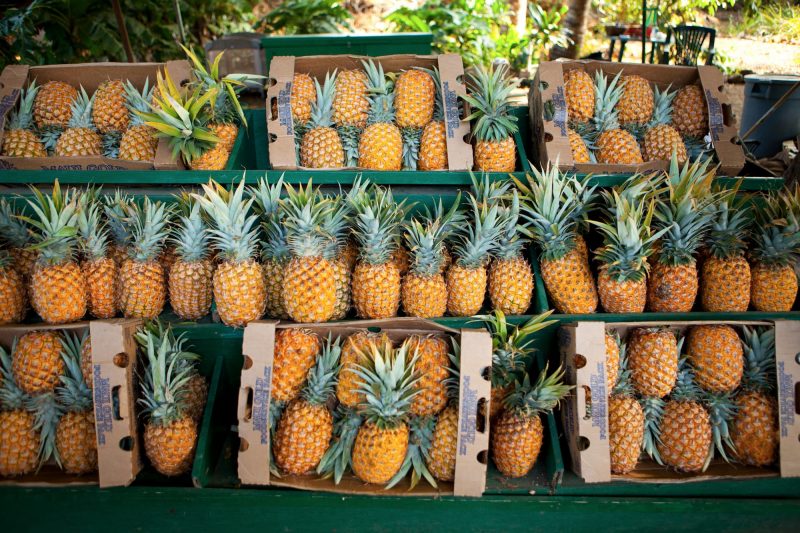 Does Pizza Hawaiʻi come from Hawaiʻi?

“Does the pizza Hawaiʻi come from Hawaiʻi?”

This question can spark a fierce debate among Hawaiian people. They will almost certainly deny any connection, but is this the truth?

The Pizza Hawaiʻi is a pizza with cheese, tomatoes, ham, and pineapple. It is the most popular pizza in Australia (about 15% of all pizza’s sold there [5]) but has very little to do with the Hawaiian islands.

We actually think that the pizza Hawaiʻi can trace its roots *back* to Hawaiʻi!

The precursor of the Hawaiian Pizza is said to be the “Toast Hawaiʻi”, which is an open-faced sandwich made with a slice of toast covered by a slice of ham and cheese below a slice of pineapple with a cherry in the middle which is then grilled. This sandwich is attributed to the German TV-cook Clemens Wildenrod who published it in 1955 [6]. “Hawaiʻi” in the name for this toast obviously comes from the use of pineapple, which was then already associated with Hawaiʻi. However, the connection between the pizza Hawaiʻi and the Islands of Hawaiʻi might be closer!

The #Pizza #Hawaiʻi could have Hawaiian roots. Blame Clemens Wildenrod!twitter shareclick to tweet 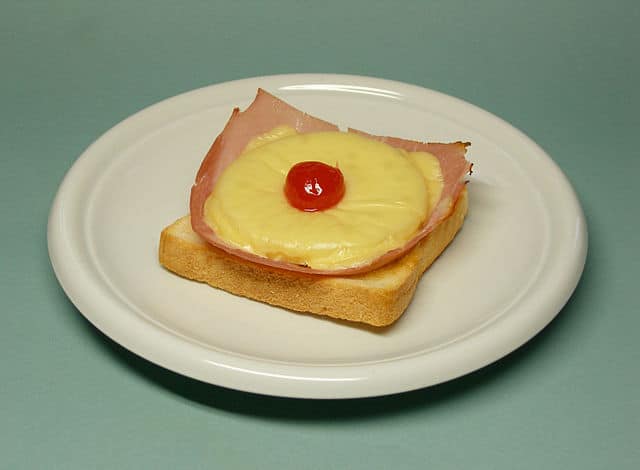 There do exist recipes of grilled spam-sandwiches including pineapple and cheese that date back to the 1930s. One example is the recipe from the Hormel cookbook from 1939: Put spam slices on buttered toast, cover with pineapple and grated cheese and put under the grill until the cheese melts. Doesn’t that sound familiar?

Spam was a main ingredient in the US army diet and as such came to Hawaiʻi. Spam still is very popular in Hawaiʻi, and recipes including the spam and pineapple likely traveled over the world in the wake of the US army canteens.

The question is then if Clemens Wildenrod was ever exposed to this spam recipe. We think that it is very probable that is the case.  Clemens was living close to Wiesbaden after the 2nd world war, and Wiesbaden was the city where one of the largest concentration of US troops was stationed. Of course, we cannot be sure but the next time that someone mentions a pizza Hawaiʻi this might be a nice story to recount – especially if that other person is from Hawaiʻi!