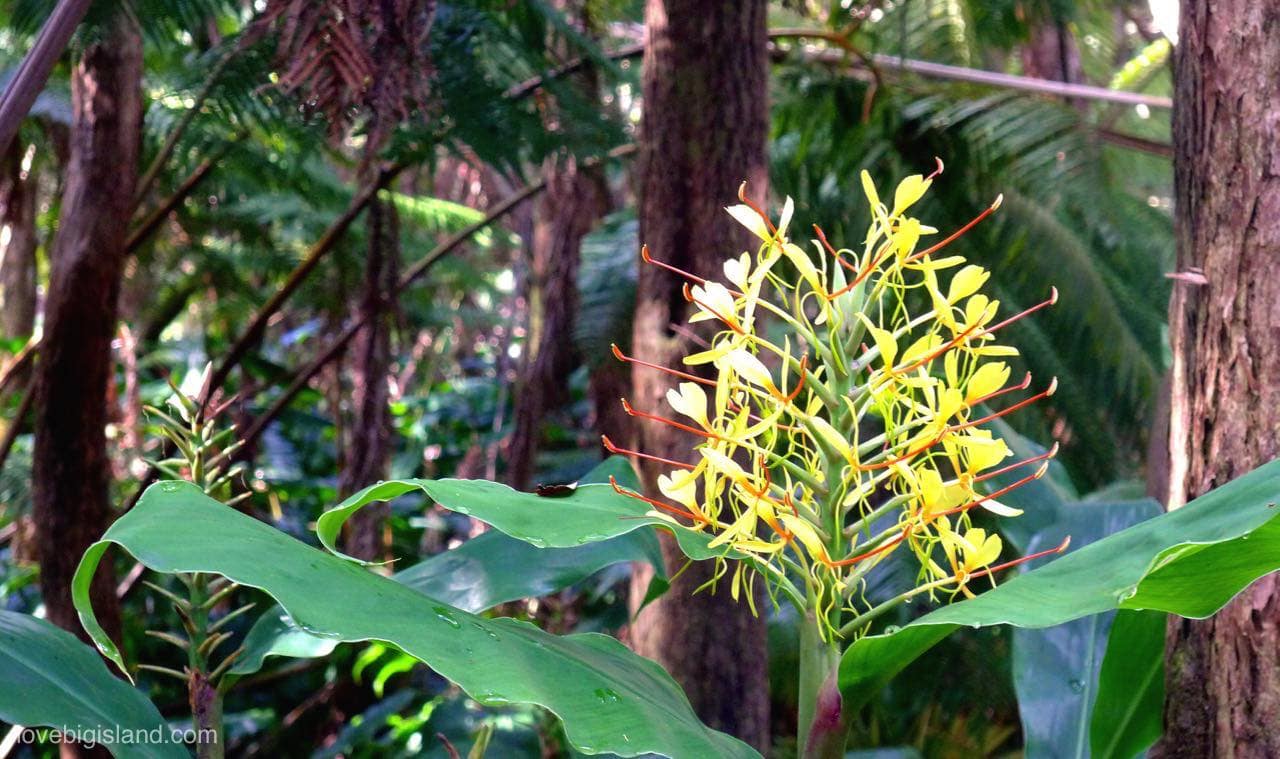 Kahili ginger is probably one of the first plants that catches your eye if you are visiting Volcano Village or the Hawaii Volcanoes National Park. It can grow up to two meters tall and has yellow or red very fragrant flowers. This ginger plants dominate the understory layer of the rainforest at these elevations and is considered as an invasive species (more below), but seeing and smelling it makes for an unforgettable impression.

We talk about the following topics for our Kahili ginger guide:

How did Kahili ginger get its name?

‘kāhili‘ is a Hawaiian word that is used for a feather standard or a long pole decorated at one end with a cluster of feather plumes. The plants were named so for their resemblance to this Hawaiian symbol of royalty which was used as a ceremonial emblem and indication of lineage.

The scientific name for Kahili ginger is ‘Hedychium gardnerianum’. Other names used to describe this plant are e.g. wild ginger, ginger lily and fragrant ginger lily.

The history of Kahili Ginger on Hawaii

Kahili ginger was introduced to the Hawaiian islands from eastern India because of its ornamental value early in the 19th century. Soon, however, it proved to be more trouble that anticipated because of its exceptional adaptation to the local conditions. 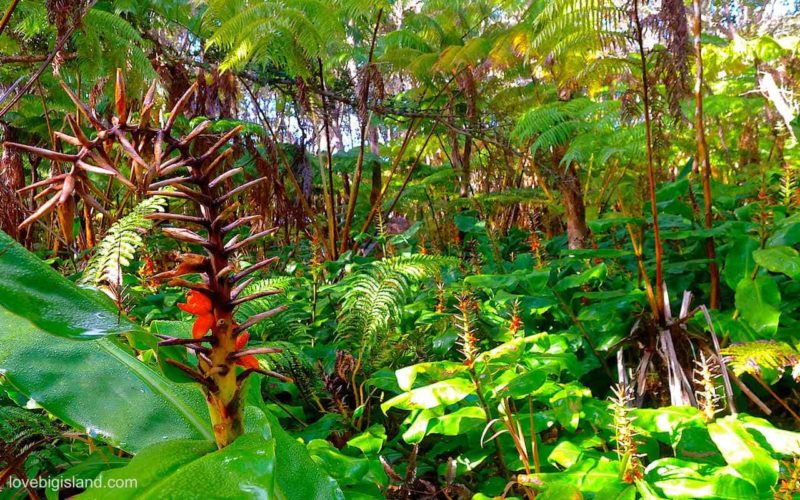 Kahili ginger covers most of the rainforest floor in Volcano Village. It is very pretty to see but considered an invasive species.

Today kahili ginger is considered an invasive species in Hawaii and it even made it to the ISSG list of 100 worst invasive species if the world. The ginger displaces native plants, forms vast, dense colonies and chokes the understory vegetation.

Kahili ginger is not only a problem in Hawaii but also in forests in e.g.  the Federated States of Micronesia, Cook Islands, French Polynesia, Hawaii, New Zealand, La Réunion, South Africa and Jamaica.

The flowers of Kahili ginger are very fragrant and large. They can grow up to ~a foot tall (between 25 and 40 cm) and have pale yellow and red flowers. These flowers only last for a week, after which 0.5 – 2 cm long orange fruits appear. If you do see one of these flowers during your stay in Hawaii, try to smell it. Their scent is unforgettable.

Kahili ginger in Hawaii is seasonal. Its flowering season starts late summer in august and continues deep into the fall. 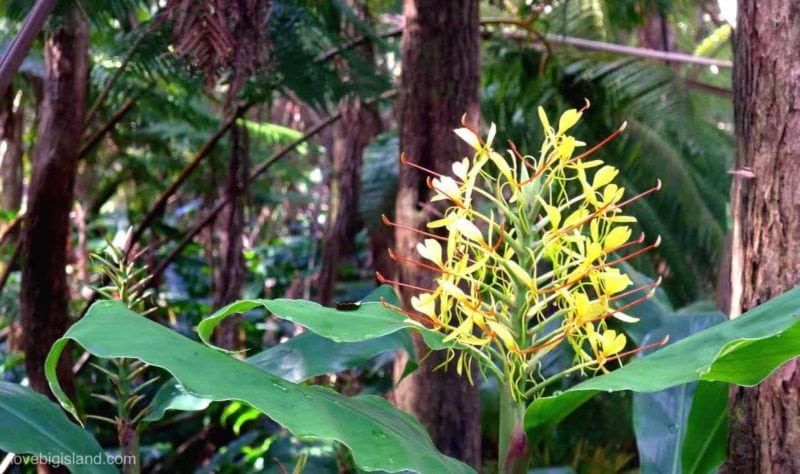 Kahili ginger flowers can grow up to one feet tall and are very fragrant.

Kahili Ginger is not edible

Many people think that the roots of this plant are edible when they first see them. Please don’t try them! Kahili ginger is not edible. The roots do resemble the edible ginger that you probably know  (Zingiber officinale) but are larger, and the plant belongs to the same family. That is where the comparison stops. The value of Kahili ginger is ornamental, not nutritional.

The only medicinal use of this plant that we know of, is its potent cytotoxicity against human small cell lung cancer cells (source)

We will leave you with a picture that shows “ginger gone wild” over a tree in volcano village. It’s rhizomes (underground stems of the plant, root stalks) grow abundantly and can even cover (parts of) trees. Here you see the rhizomes of one Kahili ginger plant still covered in the machete marks from attempts to remove it. 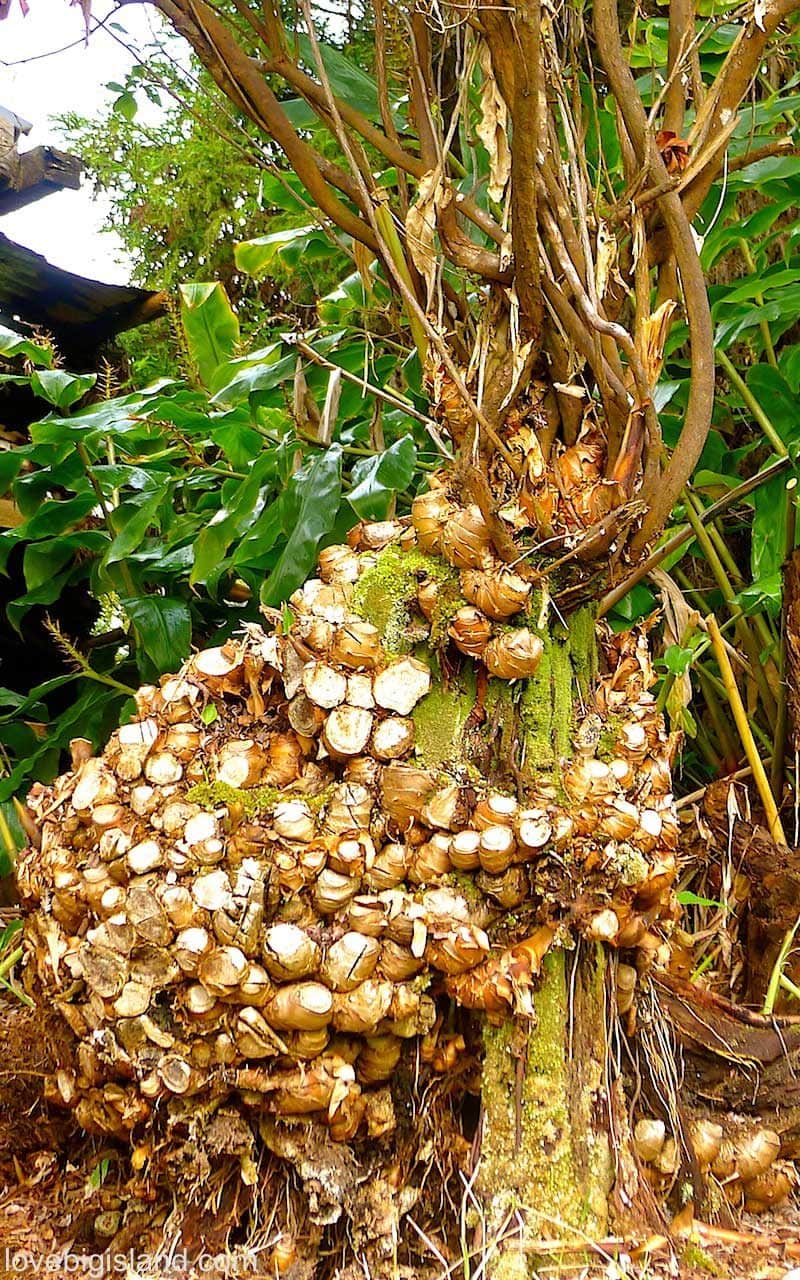 “Ginger gone wild”. One plant of Kahili ginger can smother even a tree

Call us for advice! In a 30-minute call we help you set up the trip of your dreams. Great for first-time visitors.