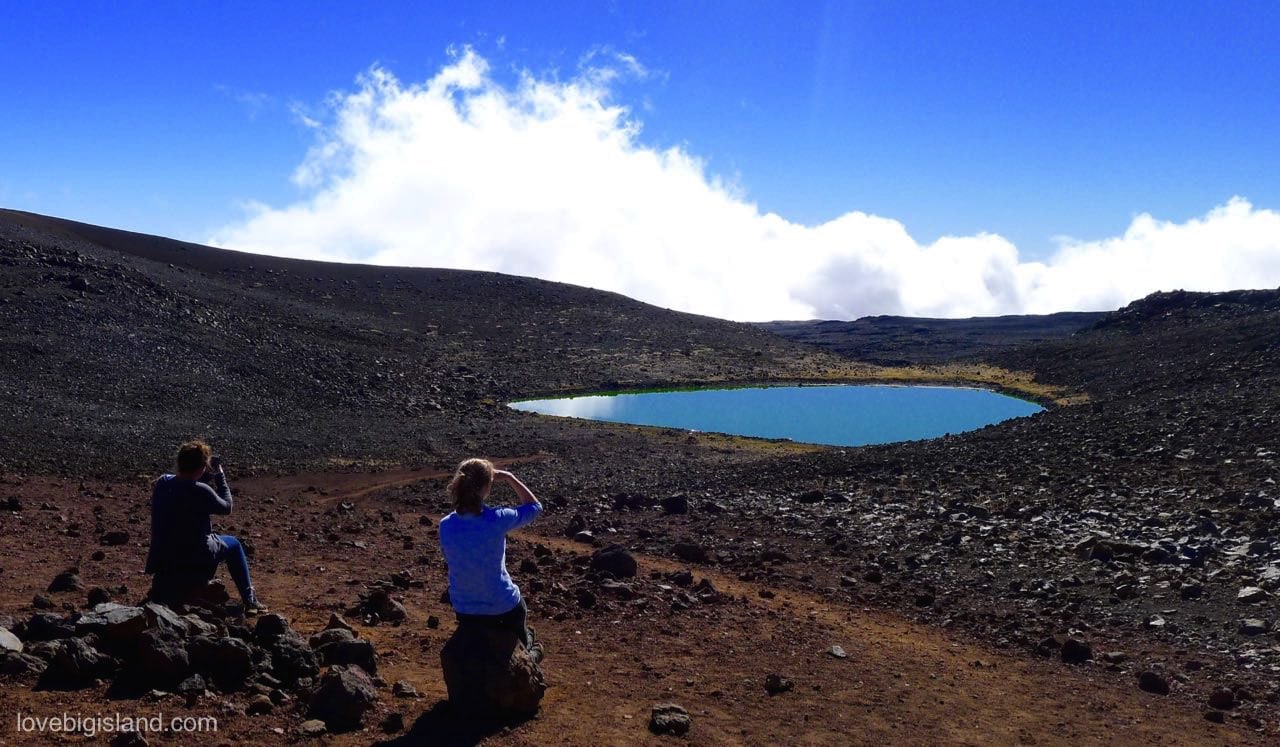 Lake Waiau is a small lake just below the summit of MaunaKea volcano on the Big Island of Hawaiʻi. It also is one of the highest lakes in the United States with an elevation of 13020 ft (3,970 m), the only alpine lake in the state of Hawaiʻi, and, after the evaporation of Ka Wai o Pele (green lake) in 2018 and the short-lived lake in Halemaʻumaʻu crater in 2020, the only lake on the Big Island.

Lake Waiau is also very interesting both from a mythological and scientific perspective. For example, it started draining in 2010 and had almost disappeared in 2013. Luckily, it started filling up again with a few big winter storms in 2014 and had all but filled up again by 2018.

Oh, and did we already mention the part where it also still isn’t clear exactly why the lake exists? 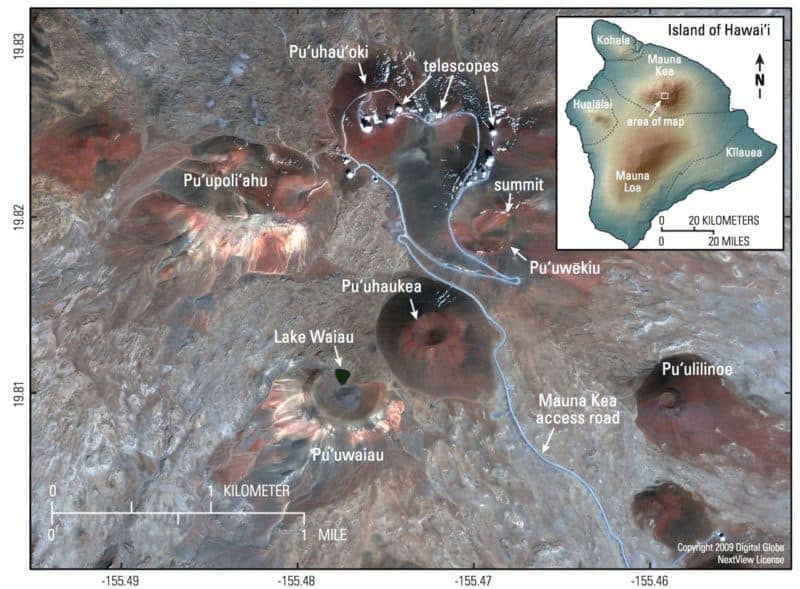 High-resolution satellite image of summit region of MaunaKea volcano, Hawai‘i. GeoEye 1 image, bands 3-2-1 (red-green-blue, RGB) from November 23, 2009. Image shows the position of Lake Waiau in relation to other prominent summit cinder cones and the summit access road. The true summit is atop Pu‘uwe kiu, near several astronomical telescopes. The inset shows a shaded-relief map of the Island of Hawai‘i. Dotted gray lines mark the surface boundaries between the five volcanoes that form the island. The small white box at the summit of MaunaKea shows the footprint of the main image. Image credit: USGS

If you are interested in visiting Lake Waiau yourself, we recommend the directions on the Big Island Hikes website.

Why is Lake Waiau a Lake?

Believe it or not, but the existence of lake Waiau is still somewhat of a mystery!  Lakes are rare features among the volcanic slopes of the Hawaiian island chain. The few basins that could hold water on these slopes are normally on top of permeable lava flows or cinder and ash, which favor the rapid seepage of precipitation. Yet, Lake Waiau exists. How does this happen?

There are currently three explanations that offer insight:

Read more about these explanations in this volcano watch article (2003). 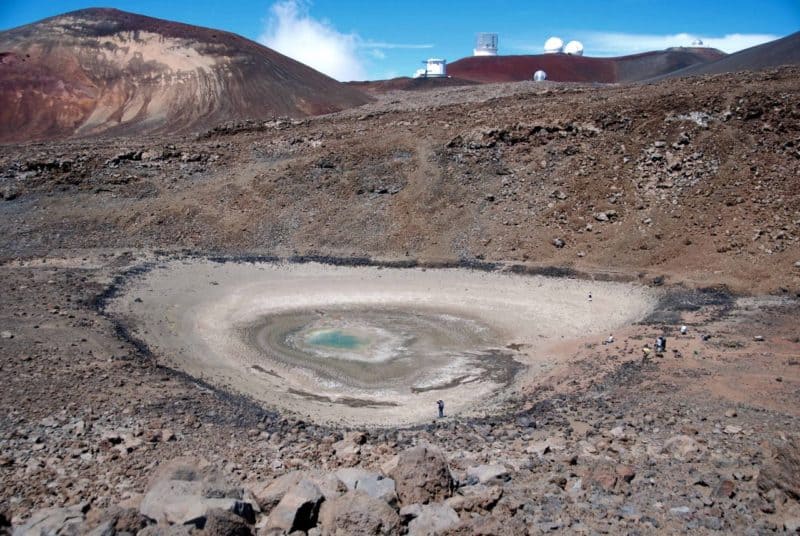 What remained of Lake Waiau on September 26, 2013. The water area was just 15 meters (16 yards) wide at this time. Prior to 2010, the lake occupied the entirety of the now-dry lake bed, which is about 100 meters (109 yards) wide. Starting in 2014, following heavy winter storms, the lake began to return to its original size. The astronomical telescopes at the summit of Mauna Kea are visible on the skyline. Photo credit: USGS 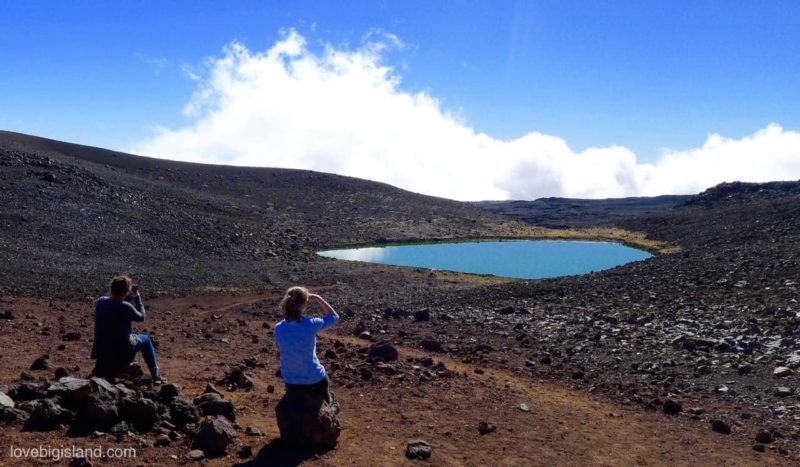 Lake Waiau is located on Mauna Kea, more than 13.000 ft above sea level. It is one of the very few lakes in the state of Hawaiʻi. This photo was taken July 2016. Lake Waiau has returned to its normal size.

In the recent years the surface area of lake Waiau has diminished in size,  hitting an all-time low in October 2013. Since then, the lake has returned to its normal size.  Recent research presented in the USGS 2015 report “Satellite Monitoring of Dramatic Changes at Lake Waiau on Mauna Kea Volcano—Hawai‘i’s Only Alpine Lake” [pdf] suggests that although the recent fluctuation in lake size has been extreme, its cause is rather commonplace: not enough rainfall.

This is illustrated in Figure 8 of the report, which we have reproduced below, and with two photos taken in 2013 and 2016. The report concludes that the severe drought, which has plagued the Hawaiian islands between ~2008 and ~2014, did not allow the lake to compensate losses from evaporation and seepage from the bottom of the lake.

Graph comparing the surface area of Lake Waiau on Mauna Kea volcano, Hawai‘i, and precipitation during a decline of the lake, 2009–2014. Image reproduced from Figure 8 of the 2015 report: “Satellite Monitoring of Dramatic Changes at Hawai‘i’s Only Alpine Lake—Lake Waiau on Mauna Kea Volcano” by Matthew R. Patrick and James Kauahikaua [pdf]

Lake Waiau is sacred in Hawaiian tradition and has cultural and spiritual significance to many Hawaiians. It is part of the summit of MaunaKea, which is considered the umbilical cord (“piko” in the Hawaiian language)  that connects the Earth to the heavens. The lake is most likely named after Waiau, one of the four snow goddesses know in Hawaiian mythology. According to this mythology, Waiau used to bathe in lake Waiau.

Read the story “Pele and the snow goddess”, which is translated e.g. here, for a deeper dive into Waiau and Hawaiian mythology.