Kamakahonu is also know as King Kam Beach or Kids’ Beach. It is a small beach most suited for snorkeling and sunbathing in the heart of Kailua Kona. You can find this beach between the Kailua pier and the King Kamehameha hotel right on Alii Drive.

The name Kamakahonu comes from “Ka Maka Honu” which means “the turtle eye” in the Hawaiian Language. Unfortunately, the rock that gave the beach its name has now been covered by the Kailua pier. 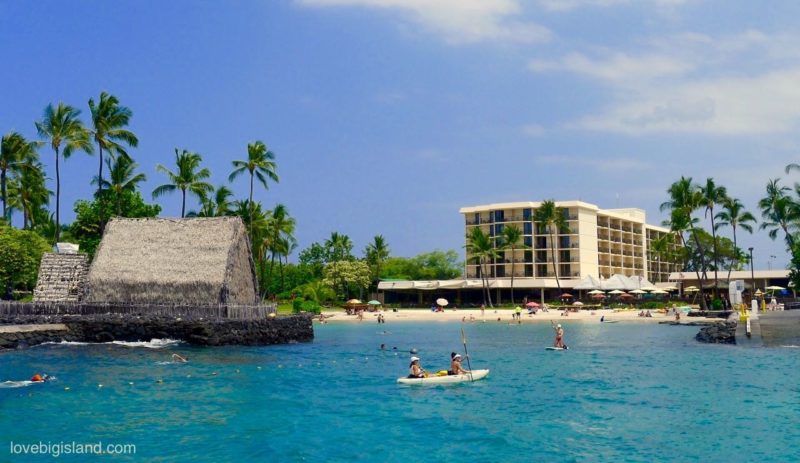 A view back to Kamakahonu beach from the pier. This beach is a good place to spend some time with a young family

Things to do at Kamakahonu Beach

This beach is a great ‘in between’ stop to take your young family or to go snorkeling. It is not a beach you should plan your day around, but great for a little swim or snorkel before or after your daily activities.

Kamakahonu has much to offer to both young and old visitors.  It is a popular spot for snorkeling, dive instruction, canoeing, and swimming.  The on-site Kona Boys beach shack rents out snorkeling gear, Hobie Cats, and kayaks, all at reasonable prices.

For snorkeling, swim out of the bay and turn right. Do not turn left since this area is often used by boats going to and coming from the pier.

A tip for the early birds: first light is one of the best times to go snorkeling!

Kamakahonu Beach is great for kids and toddlers

Kamakahonu beach is very sheltered (there are almost no waves) and is fronted by white sand and grassy lawn. This makes it a very convenient stop for any vacationing family with small children.

King Kam beach in downtown Kona is a good place to take a quick dip in between activities. You can find decent snorkeling on the other side of the pier

On the other side of the pier: Kaiakeakua beach

Kaiakeakua beach is 30 ft south of king kam beach, on the other side of the pier. This beach is more like a small patch of sand that you can use to get into the water of Kailua bay, which is another good place to go for a swim or snorkel because of the normally calm waters.

The buoys you see in the by mark a part of the bay that is off-limits because the pier is also used by larger boats. Make sure to stay between the shore and the buoys when playing in the water!

Kaiakeakua beach is 30 ft south of king kam beach, on the other side of the pier. This beach is a good place to snorkel

The ‘Ahu’ena Heiau (temple of the burning altar) is the sacred Hawaiian temple where King Kamehameha I spent his last seven years in power before his son Liholiho succeeded him. It was reconstructed in the 1970s and can be viewed from the outside. If you are interested in the temple, make a stroll to the hotel lobby to see some of the artifacts from the temple on display.

The ‘Ahu’ena Heiau temple in Kailua Kona on the Big Island. “‘Ahu’ena Heiau” is Hawaiian for “temple of the burning altar”. King Kamehameha I spent his last seven years in power here before his son Liholiho succeeded him

Kamakahonu Beach is on the north of Kailua Bay. Follow the in front of Ali’i drive to the north (keep the ocean on your left hand) and walk to the pier. The beach is directly behind the pier in front of the King Kamehameha’s Kona Beach Hotel.

If you find it difficult to find parking close to the beach you could use the paid parking at the Marriott King Kamehameha’s Kona Beach Hotel (not cheap, rates are posted at the entrance and exit of the lot). 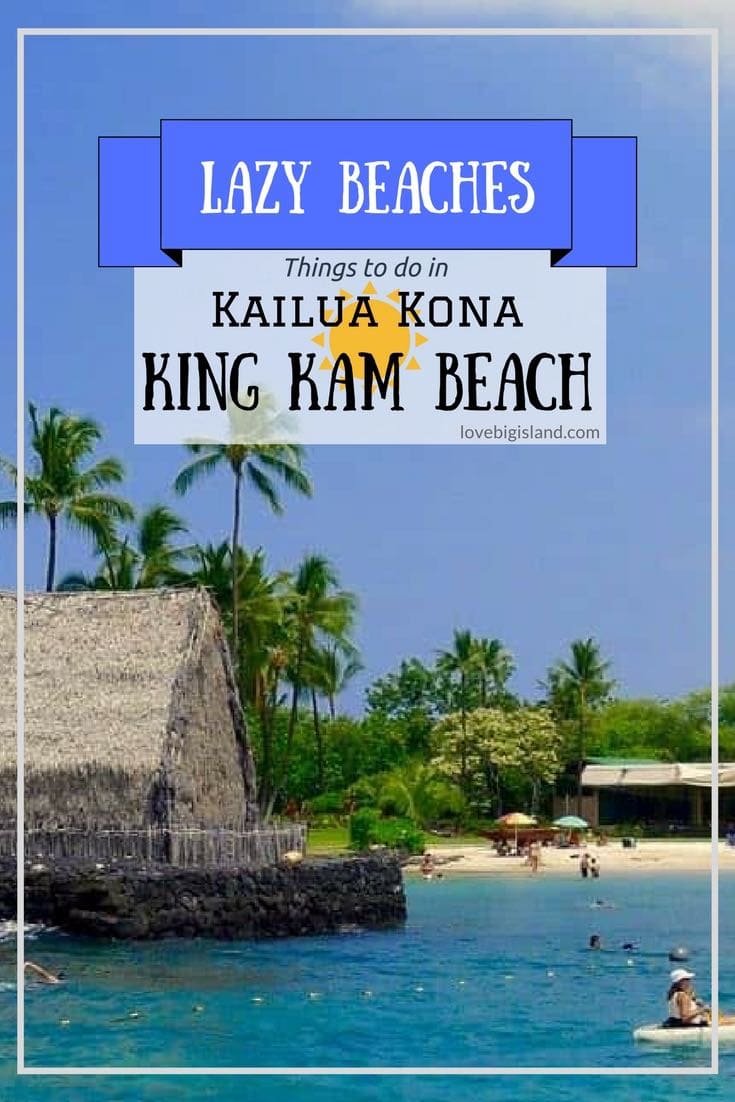 King Kam beach in Kailua Kona is a perfect spot for an early morning (before breakfast) swim or snorkel.