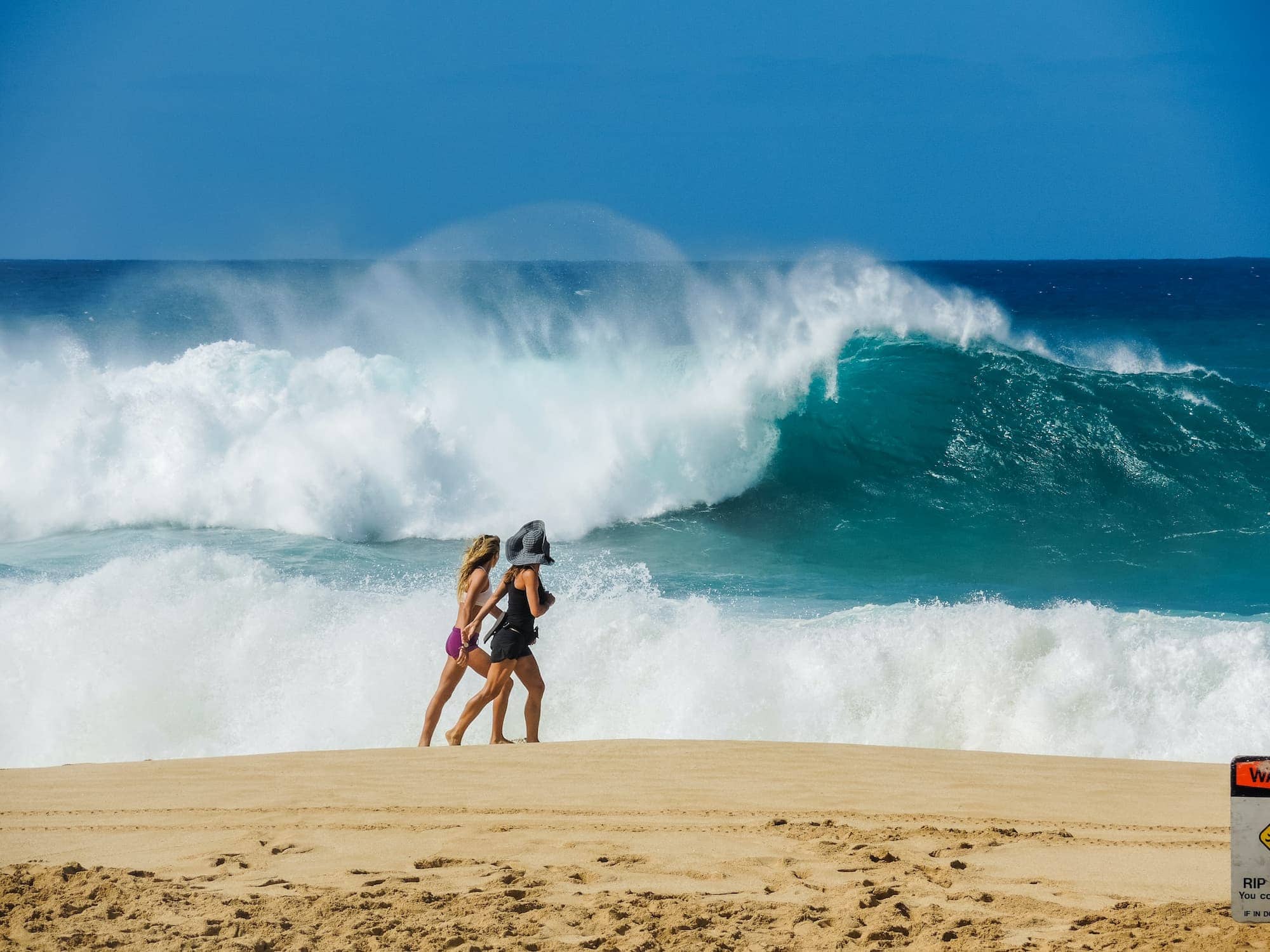 Home » Our Blog » 11 Things to Avoid In Hawaiʻi: Mistakes Most Tourists Make

Hawaiʻi is a paradise, and those who visit tend to find themselves in a mellow, relaxed mood rather quickly thanks to the low-key vibe and beautiful scenery. But, don’t let that carefree spirit get you into trouble – there are a plethora of pitfalls and mistakes that many visitors make.

Some, like a bad sunburn, are simply uncomfortable. Others, however, have more dangerous and lasting consequences.

Here, we discuss the common mistakes tourists make when visiting Hawaiʻi, and how to avoid/be prepared for them

Turning Your Back to the Ocean

The ocean is the primary recreation area in Hawaiʻi, offering everything from floating and swimming to boating and surfing. Because many people who visit are unfamiliar with the ocean, it unfortunately causes its fair share of incidents and accidents.

As we’ll see in the next point, rough currents present significant danger when swimming in deep water. But, many injuries happen close to shore as well, because, quite simply, people forget to pay attention to the incoming waves.

In Hawaiʻi, the number one rule of thumb is to never turn your back to the ocean. This rule applies whether you’re standing ankle-deep in the surf or swimming where you can’t stand, whether the waves are big or small. Always keep your eyes forward and your attention focused on what’s coming towards you. Many people get caught looking elsewhere and are blindsided by waves, resulting in injury.

While it seems like common sense, it is very easy to get distracted, and even small waves pack a big enough punch to knock someone over, both kids and adults. Keep your attention on the ocean when recreating to avoid trouble. 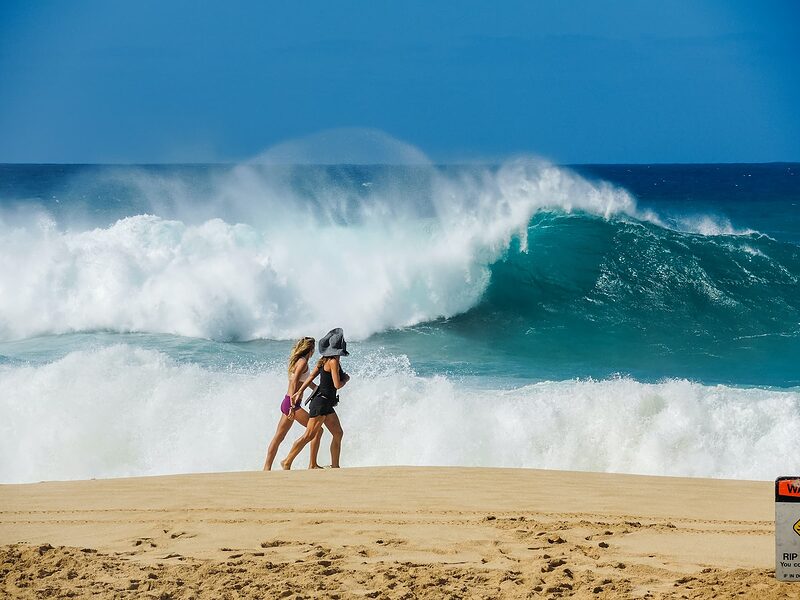 During wintertime to ocean at the Oʻahu North Shore can be especially dangerous. Photo by Simon English on Unsplash.

Underestimating the Power of the Ocean

Hawaiʻi’s unique location in the middle of the Pacific arms its waters with strong currents and an aspect of unpredictability. The ocean can look calm and inviting one minute, but then suck you out to sea in the next without warning. Waves that look small and manageable are bigger – and much stronger – than they appear from shore.

Before entering the water, always check with lifeguards about the conditions of the currents. If you find yourself being pulled out to sea, swim parallel to the shore until you are free from the current. Swim only at lifeguarded beaches to ensure your safety and, if in doubt, don’t go out.

Currents that pull you away from the shore are called rip currents, and they are easy to spot. Have a look at the NOAA website (here) or watch the following 3-minute video to learn how to recognize them and to learn what to do if you find yourself caught in one:

Climbing on Lava Rock Near the Coast

Another classic mistake people make in Hawaiʻi is climbing on lava rocks along the shoreline. One only has to pay a short visit to YouTube or social media to see many examples of just how painful this experience can be.

Tidepools and other coastal formations are fun to explore during calm conditions, but one has to be super aware. Waves, both big and small, can smash into the rocks, knocking people over and/or creating slippery conditions.

Lava rock is extremely sharp and unforgiving, with falls resulting in cuts, scraps, and major abrasions. There is also the risk of being dragged across the rocks and into the water – an unfortunate but common cause of death or serious injury in Hawaiʻi.

Be extremely mindful when exploring coastal areas. When in doubt, stay back and enjoy from a distance. 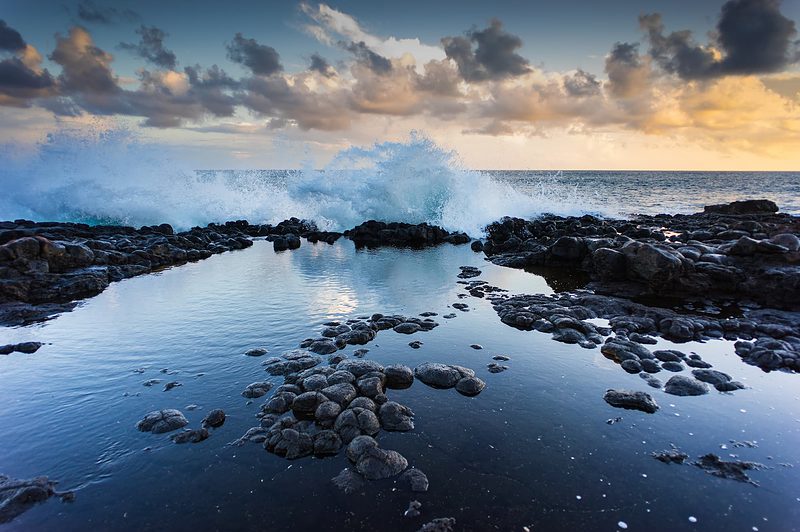 Waves pummel the lava rocks aside Glass Beach on Kauai. Tidepools like those shown here are amazing to explore but one should always be aware of the ocean. Photo by Paulius Dragunas on Unsplash

Every month, jellyfish make their way into Hawaiian waters, creating the opportunity for an uncomfortable encounter with swimmers.

The good news is that their arrival is highly predictable: Jellyfish are typically seen anywhere from 1-2 weeks after the full moon. Lifeguards are good about putting up warning signs, and within a few days, the threat usually subsides.

Calendars such as this one approximate the arrival of the jellyfish. If you find yourself in Hawaiʻi during this time, don’t fret. While you should show some extra vigilance, you can protect yourself from stings by wearing a thick rash guard. Swim at lifeguarded beaches so you can receive immediate treatment/assistance in the case of a bad sting. 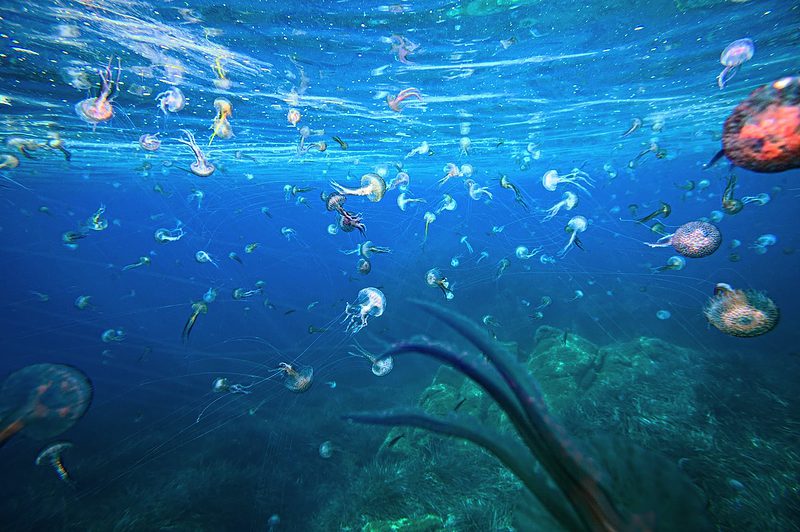 Jellyfish, such as these ones off the coast of Molokaʻi, are typically seen anywhere from 1-2 weeks after the full moon. Photo by Jake Houglum on Unsplash

Excited for that waterfall hike and a swim in the pool below it? Be sure to check yourself for cuts before jumping in.

Hawaiʻi’s fresh water sources often contain a harmful bacteria called Leptospirosis. It enters the body through open wounds, and can cause symptoms such as fever, headache, chills, muscle pain, and vomiting. According to the Hawaiʻi Department of Health, approximately 50% of U.S. Leptospirosis cases occur in Hawaiʻi.

If you have any type of cut on your body, big or small, you should avoid swimming in fresh water while visiting. 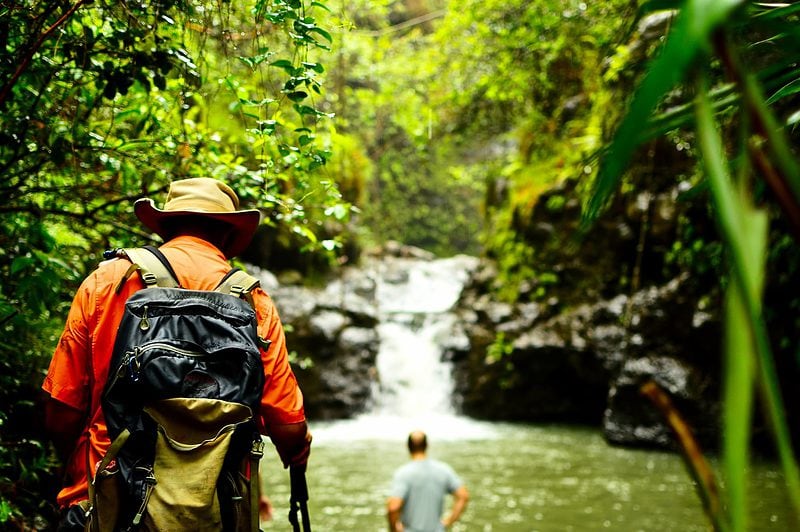 Waimano falls is a waterfall on Oʻahu located at the end of a normally moderate 2 mile hike. Source: Jason Jacob via Flickr CC BY-ND 2.0

While this sounds straightforward as something you wouldn’t do anywhere, more people trespass in Hawaiʻi than you would think. Unfortunately, many guide books even encourage such behavior when pointing people to illegal hikes or areas that cross private property.

A good rule of thumb in Hawaiʻi (or anywhere) is to always be aware that you are a guest, and that you are not entitled to go anywhere you want. Stay on established trails and pay attention to posted signs. Most people are rather innocent when trespassing, but it has come to be a tired act in Hawaiʻi as many locals have run out of patience. Pay attention and do your part to be a good visitor. 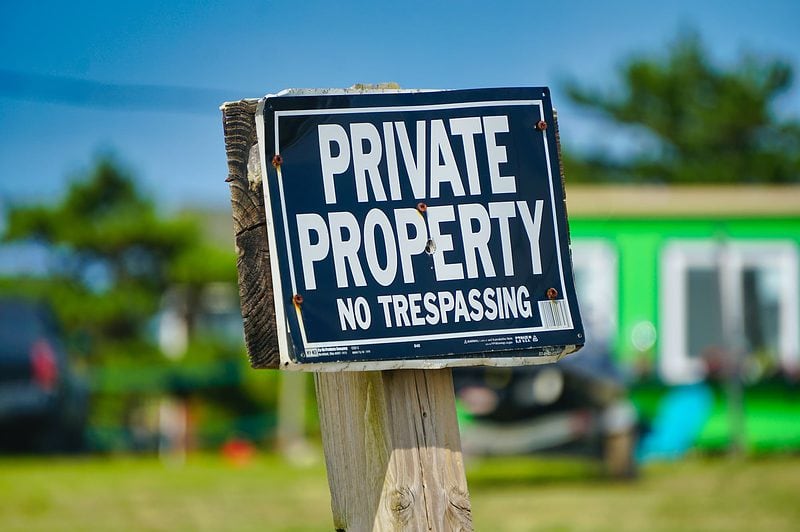 As a worst-case scenario, in Hawaii, a person can be charged with criminal trespass when they knowingly enter or remain unlawfully in a home or a premise where they are not wanted. Photo by Gene Gallin on Unsplash

Divers who visit Hawaiʻi will find an exciting underwater world to explore. Just make sure you schedule your dives accordingly.

As a rule of thumb, one should not fly 12-24 hours after scuba diving. The exact amount of time depends on the depth and extent of the dive, as well as the maximum altitude of the flight, but to be safe, one should plan a full 24 hours between their final scuba dive and flight to avoid any health risks/complications due to decompression sickness. Visiting the summit on Maunakea places similar restrictions.

Many people run into timing issues because they are island hopping and moving around every few days. Divers should take an extra moment to plan their dives in accordance with their flights. If diving is a top priority, you may want to schedule in a few buffer days in case your dive gets postponed due to weather.

The Manta ray dive is among the most popular dives on Hawaiʻi. By Steve Dunleavy – Nick and Isabelle, Kona Hawaii, CC BY 2.0, Link

Not Wearing (or Reapplying) Reef-Safe Sunscreen

The first mistake people make is not wearing or reapplying sunscreen often enough. While many people picture Hawaiʻi as being a couple hours off the coast of California, it is actually much farther south in the Pacific, located close to the equator where the sun is strongest. If you donʻt apply sunscreen early and often, you will be badly burned.

The second mistake people make is in their choice of sunscreen. In 2021, Hawaiʻi became the first state in the country to ban the sale of sunscreen containing the chemicals oxybenzone and octinoxate, which have been shown to damage underwater reefs. When choosing a sunscreen, be sure it does not contain these two chemicals. Check the ingredients to make sure – some sunscreens are marked “reef-safe” despite containing one or both of these chemicals. 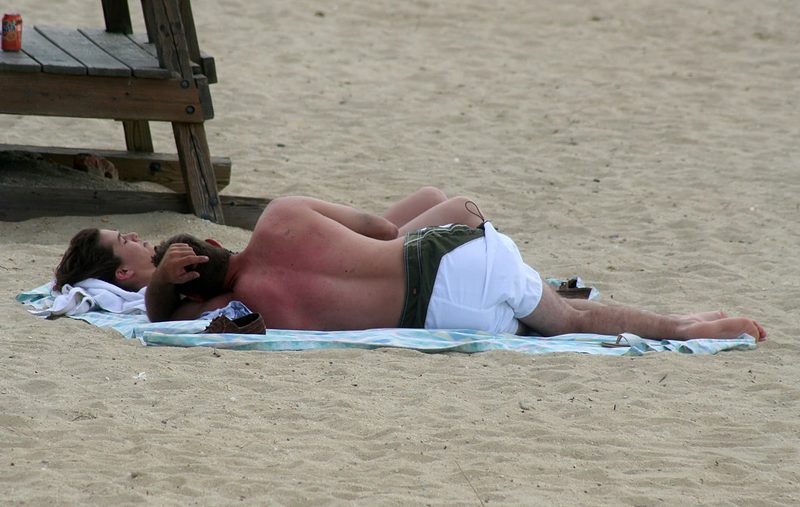 Forgetting to (re)apply sunscreen on the beach is easy to do but can leave you feeling sorry for days! Image by Tony Alter on Flickr (CC by 2.0, source).

Hiking in the rain is something we here at Love Big Island enjoy. There are less people on the trail, it’s cooler without the sun, and what better way to experience a rainforest come alive than in the rain?

However, there is a big difference between hiking in a light rain and a heavy rain. The former adds a bit of atmosphere and intrigue to the adventure, but the latter adds significant risk and potential danger.

Heavy rain will make the trails muddy and slippery, increasing the risk of a hard fall. Streams rise as well, creating the potential for flash floods or dangerous crossings. See, for example, the video below which shows how unexpected storm and heavy rains transform the Kalalau trail on the Napali Coast from moderately difficult into life-threateningly dangerous.

Kalalau Trail - When A Storm Hits

Be smart about when you hike, and take the weather in Hawaiʻi seriously. Heavy tropical rains bring about their share of dangers. We recommend always having a rain jacket or poncho in your day pack.

This really isn’t about visiting or not visiting Waikīkī. Often, it’s the most affordable place to stay on Oʻahu, and certainly the place with the most conveniences accessible via foot. Besides, Waikiki Beach is unrivaled! So, visit and enjoy if you dare.

However, don’t make it your only stop. Waikīkī is much different than any other place in the islands, and not representative of the big picture as it relates to Hawaiʻi and Hawaiian lifestyle or values.

When visiting Hawaiʻi, be sure that Waikīkī is a part of your trip, not the whole thing. Explore the diverse terrains and small towns of Oʻahu, and hop over to another island if can. You’ll get a more complete view of the way of life in Hawaiʻi. 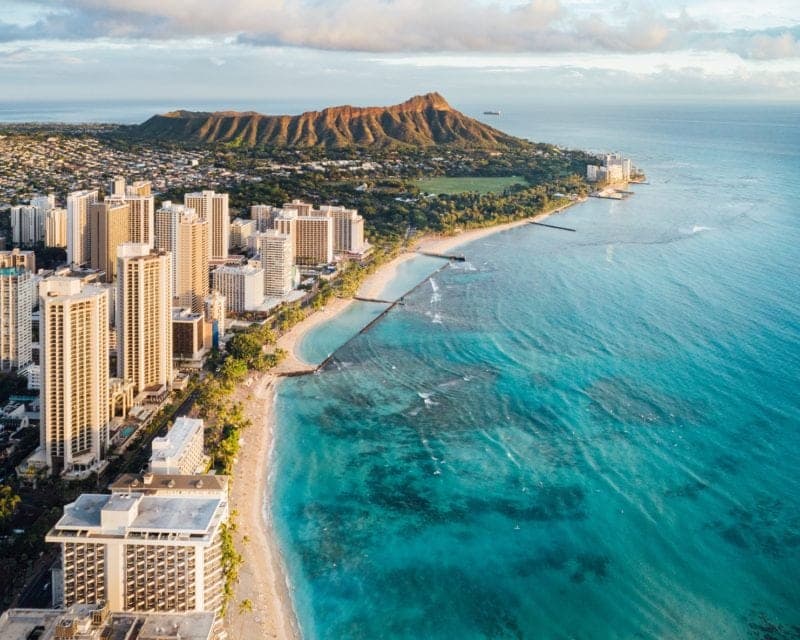 You know you should go to another island, but which one? Should you just pick at random?

Maybe, but probably not. While they share access to the ocean in common, there are major differences between the islands that could end up being a bummer if you aren’t aware of them.

For example, you could be looking forward to a relaxing, easy-going beach getaway on the Big Island, not realizing that its beaches are young and rocky and that exploring the island requires a (relatively) tremendous amount of driving on a daily basis. You’d be much better off on Maui and Oʻahu, where a plethora of white-sand beaches surround small, easy-to-navigate beach towns. 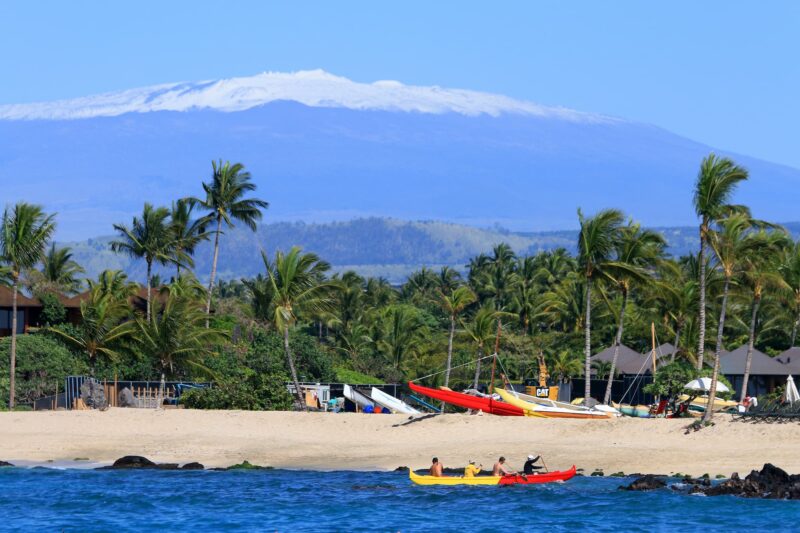 Island comparison: which island is better for me?

Since choosing between islands is often the most difficult part of planning a trip, we created an island-comparison series to highlight the key offerings and differences between them. In each of those articles we list which of the 2 islands is better according to the following 5 criteria:

We hope this helps in your trip planning!