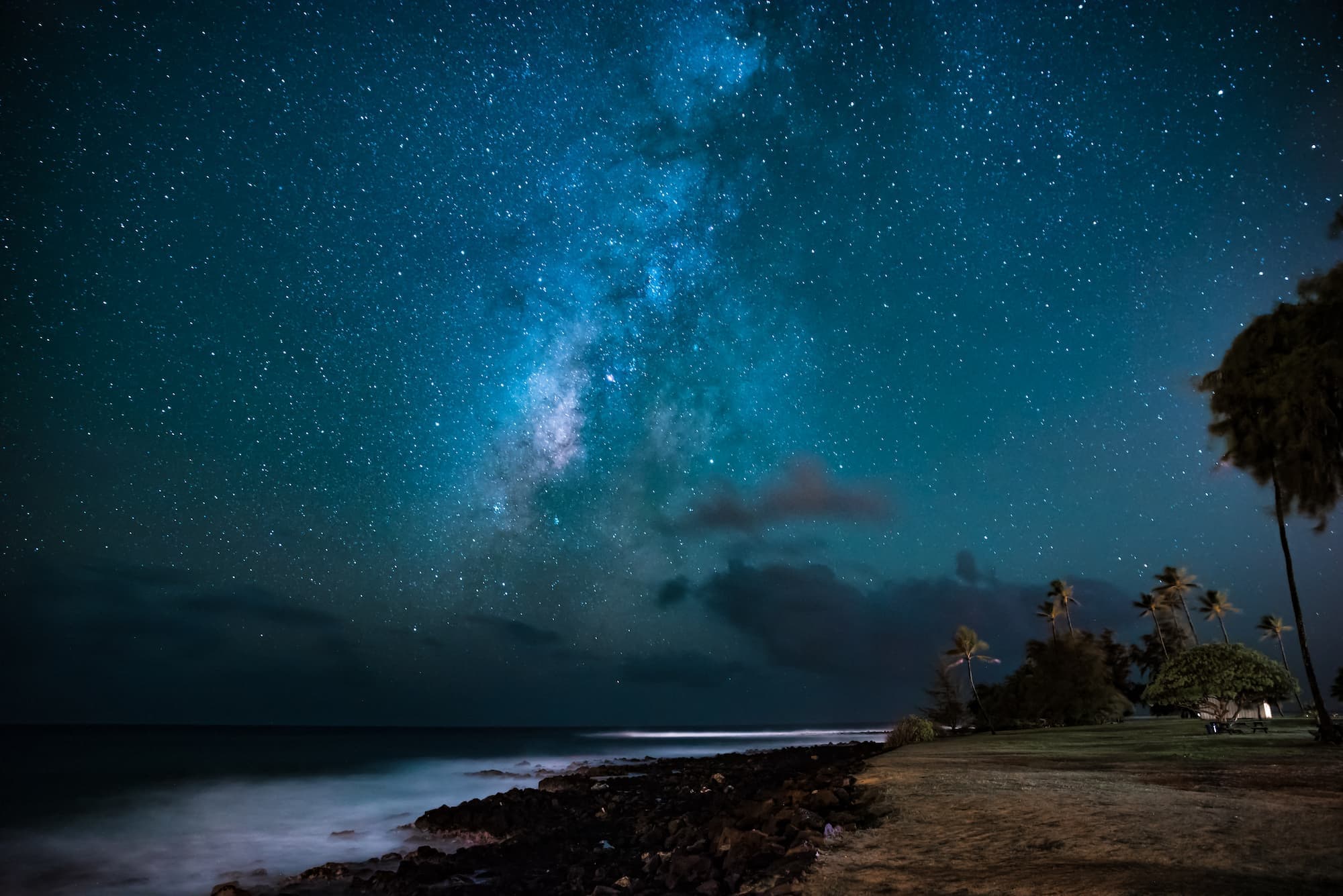 Who is ready to experience Hawaiʻi after dark? And no, we don’t mean at the nightclubs in Waikīkī.

Hawaiʻi’s nature is obviously a wonderful place to explore by day, but don’t forget about the show it puts on at night. The island chain’s isolated existence way out in the middle of the Pacific Ocean makes it one of the top places in the world to take in the night sky.

No matter which island you find yourself on, you can experience stargazing like never before (yes, even on Oʻahu!).

7 Stargazing Tips and Things to Remember:

Things that are important to remember about stargazing:

1: Stargazing conditions are best away from population centers

The more light pollution, the less stars you will see. Because state and natural parks have by their nature very few buildings they are prominently featured in our list below.

The night sky is always a sight to behold, especially when the milky way forms a bright band across the sky. However, some nights are better than other, and if at all possible you can try to time your night of stargazing with an event such as a meteor shower, lunar eclipse, or new moon (see tip #7).

Have a look at our yearly astronomy calendar for Hawaii to see what is going on in the Hawaiian skies this year.

Getting away from town lights and population centers is encouraged, but be safe about it. Don’t hike off into the darkness without proper footwear, flashlights, and back-up batteries.

One of the reasons that stargazing atop the volcanoes – such as Mauna Kea on the Big Island – is so revered is because the viewing areas are above the clouds. Even if it’s cloudy at sea level, driving up in elevation can often get you a clear view of the sky.

You can have a great stargazing session any night, anywhere in Hawaiʻi. But, check out the map below (source), which shows the frequency of clouds in different parts of the islands.

Notice that the north and east (windward) sides of the islands tend to get more weather, and thus, a higher frequency of clouds. If you’re planning a dedicated stargazing outing, the west coasts will be more reliably clear. 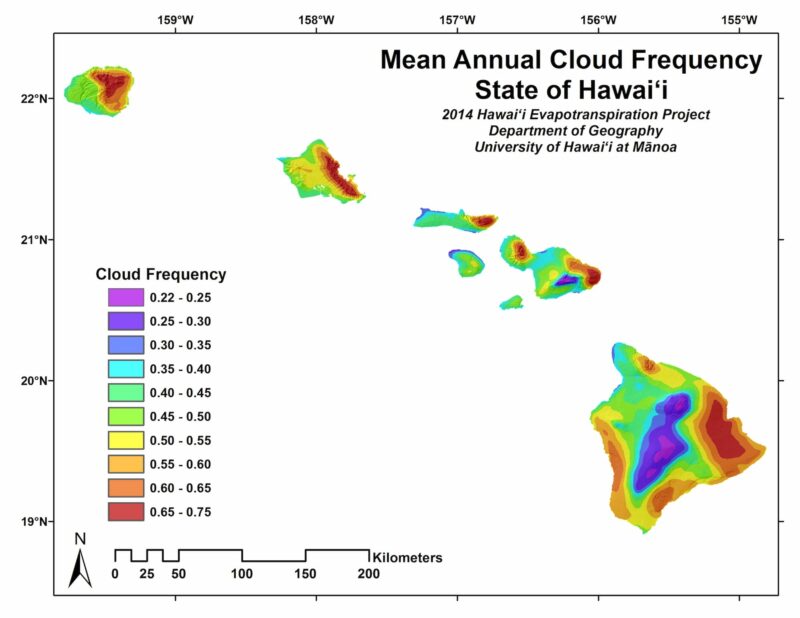 6: Watch the weather in advance

You can get an idea about how the stargazing will be by following the weather. If it calls for clouds, the stars will be less visible.

7: Plan around the moon

Full moons can be a spectacular sight, but their light will significantly decrease the number of stars you can see. Even when the moon is not full it can make a big difference.

It is best to go stargazing when the moon has not risen above the horizon. You can see a current calendar for when the moon is visible and how bright it will be, on the Time and Date website. 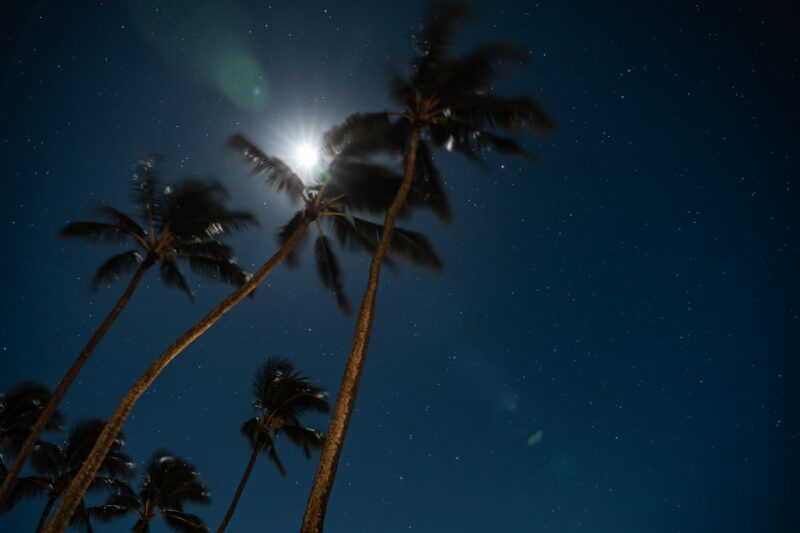 While very photogenic, a bright moon can drown out all but the brightest stars in the sky. Photo by Pascal Debrunner on Unsplash

Stargazing Spots on the Big Island

The Big Island is home to many international telescopes and scientific studies related to astronomy, making it a wonderful place to stargaze and learn more about the heavens above.

The Hawaiʻi Volcanoes National Park is open after dark, making it a nice option for stargazing outings. You can drive the Park roads a little beyond the Visitor Center and pull over where appropriate, hike a short trail for a clear view of the sky, or go for a remote destination within the Park, like the Kulanaokuaiki Campground or the Kīpukapuaulu (Bird Park) parking lot.

Good to know: The summit of Kīlauea is subject to changing weather, so keep an eye on things. When the lava is “glowing” in the summit crater, its radiance can effect stargazing, as can the many headlights of other visitors in and around the Visitor Center. 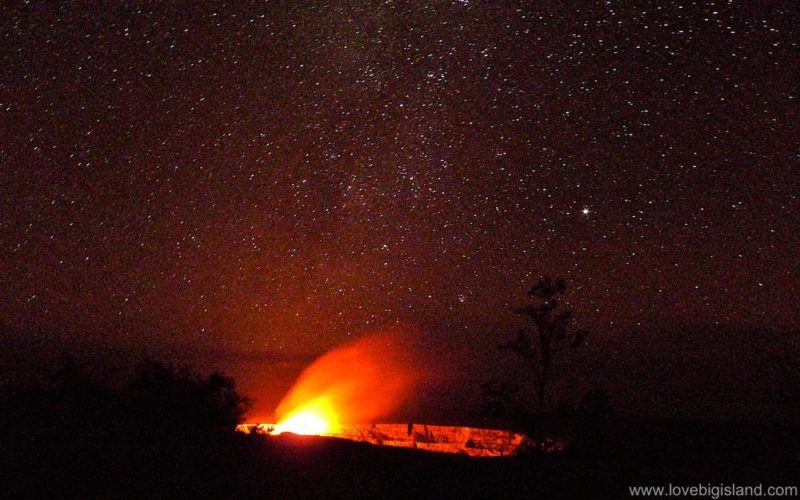 The glow from the Halemaumau crater at night in the Volcanoes National Park, seen from the Jaggar Museum overlook

Mauna Kea’s combination of high elevation (nearly 14,000 feet), remote location, and low light pollution make it one of the best places in the world to stargaze. And that’s not just our opinion. About a dozen countries participate in the operation of telescopes atop the mountain, making it an international hub for celestial study.

Good to know: You can join a tour that combines seeing the sunset at the summit of Mauna Kea with a private stargazing tour at lower elevation (such as this one from Hawaiʻi Forest and Trail), or go to the Visitor Center for self-guided stargazing and ranger-assisted programs. Call and ask for the schedule.

No stargazing at the summit

The summit of Maunakea needs to remain absolutely dark for astronomical observations and it is not possible for normal visitors to remain there after dark. The visiting hours to the summit area are from 1/2 hour before sunrise until 1/2 hour after sunset. 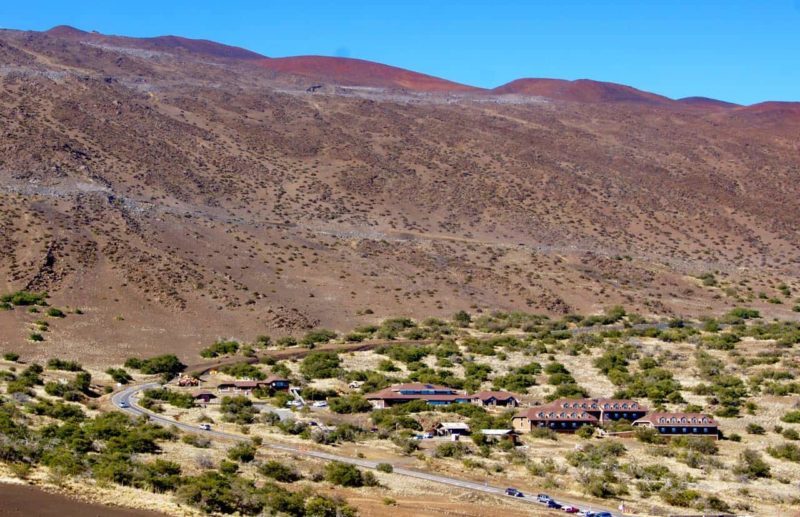 A view of the Onizuka Center for International Astronomy Visitor Information Station on the slopes of Mauna Kea. Credit: Madereugeneandrew – Own work, CC BY-SA 4.0

The west side of the Big Island is blessed with clear, dry weather much of the year, making it a great place to stargaze. While the city lights of Kailua-Kona can impact your view from town, find your way to less inhabited parts of the north Kona coast for darker conditions.

Good to know: If you’re looking for a wilderness area, try the Puʻu Waʻawaʻa Forest Reserve. Or, simply head to parts of the coast with minimal development, like Hapuna Beach or the Kīholo State Park Reserve, among others. 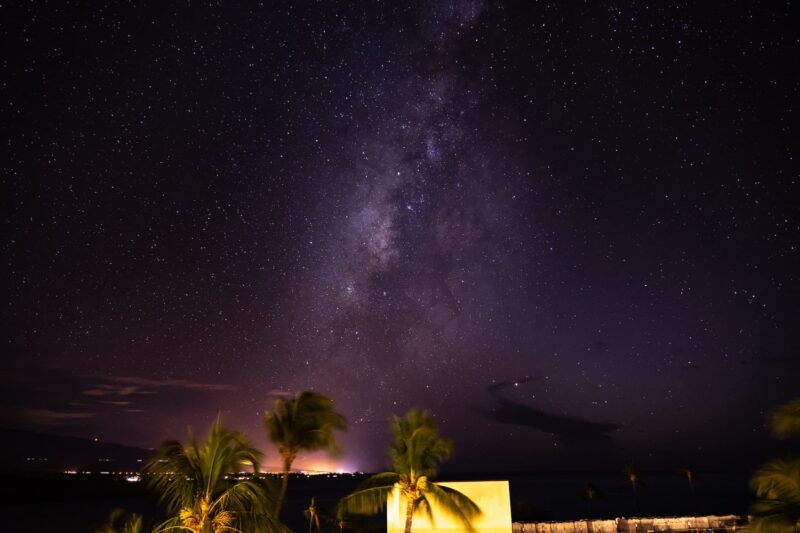 Photo of the Milky Way takes from the Westin Hapuna Beach Resort on the Kohala coast. Photo by Pascal Debrunner on Unsplash

Kauaʻi is known as the “Garden Island” for its lush, tropical landscape, which means it sees its fair share of rain. However, the south and west coasts of Kauaʻi are typically dry, opening the door for some great stargazing.

Located more than 3,000 feet above sea level on the dry southwest part of the island, Waimea Canyon offers spectacular stargazing in and around its established trails and lookouts.

Good to know: As Waimea Canyon is remote with no nearby services, you’ll want to bring food and drink with you, as well as some warm clothes. It will be very dark up at the canyon, so bring a flashlight for walking. Camping at Kokeʻe State Park is also an option.

The southwest coast of Kauaʻi is sparsely developed around the towns of Waimea and Kehaka, making the beaches in the area a wonderful place to lay back and see the stars.

Good to know: Kehaka Beach Park and Barking Sands Beach are both reliable options in the area. When stargazing on the beach at night, always go with a buddy and be respectful of local residents who may live nearby. 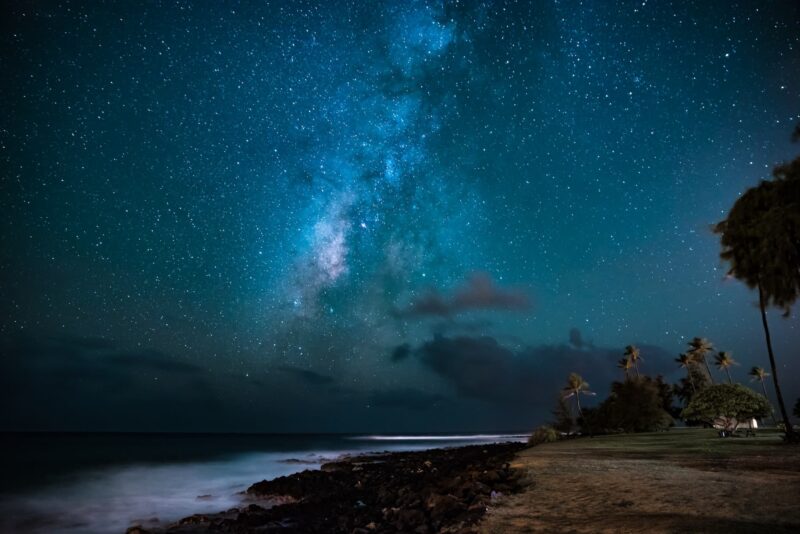 Long exposure shot (notice the elongated star trails) of the Milky Way from Poipu beach on Kauaʻi. Photo by Casey Horner on Unsplash.

This remote beach park on the west side of Kauaʻi is far and away from light pollution, making it an idea destination for viewing the night sky.

Good to know: This state park closes at 7:45 p.m. (it may vary slightly by time of year), but that still leaves you time. Go for the sunset, then lay back as dusk settles in and the stars appear. Consider getting a camping permit and spending the night for the full experience.

Maui’s combination of upcountry terrain and remote, undeveloped areas make it a great place to observe the night sky.

The summit of Haleakalā rises to 10,000 feet and is home to a handful of telescopes and scientific endeavors. The clouds typically rest below the summit, allowing for prime viewing of the night sky.

Good to know: Go for the sunset and stay for the stars. Or, considering jumping on a guided stargazing tour. 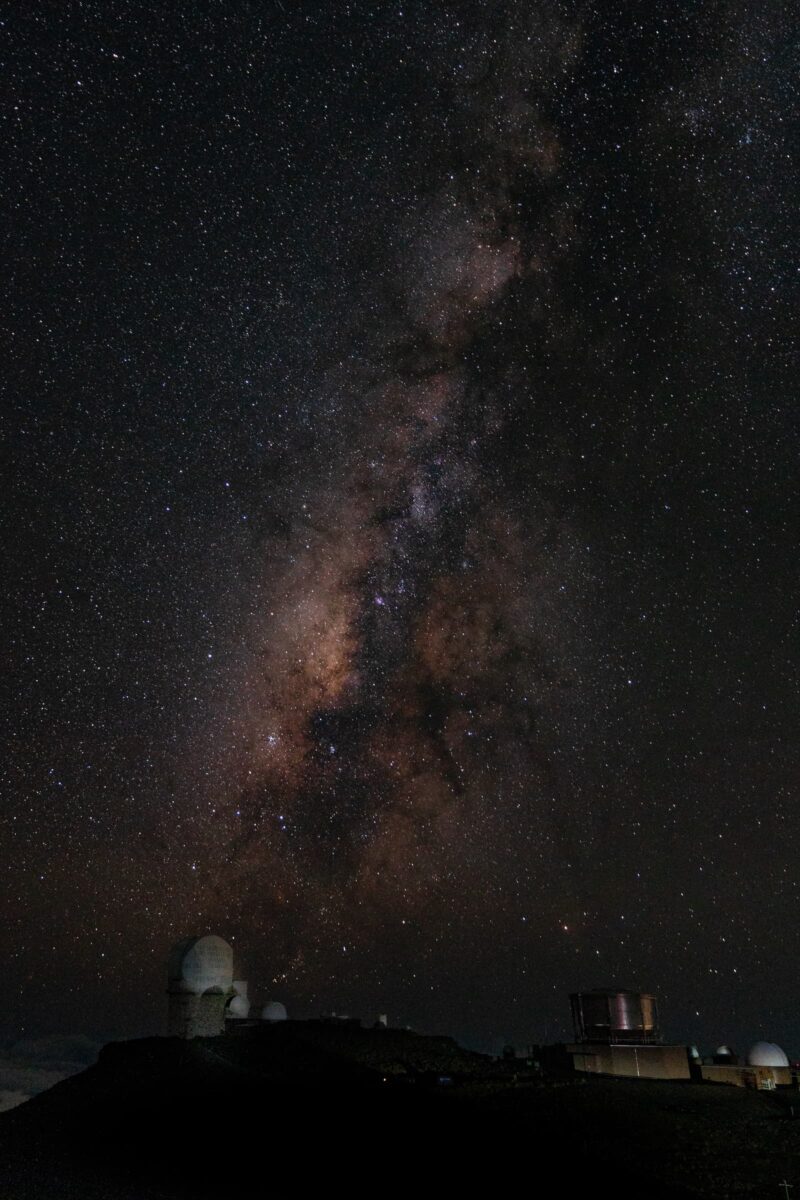 A beautiful view of the Milky Way over the observatory at the Haleakala summit are the rewards for setting your alarm at 1:00am and an early morning drive up to Haleakala Crater. Photo by Kameron Kincade on Unsplash

Now, this one comes with a little risk, but if you time it right, you’ll be very happy. Hāna is one of the most remote towns in all of Hawaiʻi, cut off from all major development. And nearby Kīpahulu is considered the backside of Haleakalā National Park, with no development to speak of. This bodes well for views of the night sky; however, Hāna and the eastern part of the island does receive a lot of clouds and rain, so it’s possible that you could get blocked out.

Good to know: This is a nice roll of the dice for people who decide to break up the Road to Hāna into two nights. Spend a night at one of the small inns (or the very nice Hāna-Maui Hotel) and see what fortune the weather brings.

La Perouse Bay is located at the end of the road along the far south coast of Maui. Adjacent to reserve areas, there is no development around La Perouse Bay. Take a short walk out into the lava fields for unabated views of the sky.

Good to know: La Perouse Bay has lots of sharp lava rock, so be sure to bring a flashlight and wear close-toed shoes when exploring at night. Bring a chair or blanket to sit on the ground.

The city lights of Honolulu make stargazing on Oʻahu more challenging than other islands. However, you can still have a great experience if you know where to go.

Kaʻena Point state park is located in the northwest corner of the island, about as far away from Honolulu as one can get. It’s usually clear and dry in this part of the island, making it a reliable place for stargazing.

Good to know: Park at the end of the road along the north shore and walk a few hundred yards out along the dirt road/trail. Bring a flashlight and a blanket or chair.

The north shore is generally the darkest place on Oʻahu due to its location away from the densely-populated south shore. Make your way to one of the many North Shore beach parks on a clear night and lay back in the soft sand.

Good to know: Be mindful of where you park along the north shore. Be respectful of local residents who live along the beach.

As Oʻahu is the “party island,” it make sense that the Hawaiʻi Astronomical Society offers “star parties” from time to time – a gathering of star lovers with a focus on an exchange of knowledge and the use of shared telescopes.

Good to know: The star parties usually take place at Kahala Community Park (East Oʻahu) or Geiger Park in Ewa (Leeward Oʻahu). You can see a full list of events and contact them here for more details and/or to sign up.