Oahu’s windward or eastern coast offers a slower-paced version of Oahu, including some of the most stunning natural beauty anywhere in Hawaii.

Good to know: the Windward coast

In Hawaii, the wind and weather typically come in from the east/northeast. This small fact explains why the eastern coast of every Hawaiian island called the Windward side.

It also explain why the windward side of Oahu is such a lush and beautiful place. As the air reaches Hawaii it drops most of its moisture along the eastern coast as it gets blown over the volcanoes, making that side of the island a bit cooler and more lush than the rest of the island.

But don’t worry – these rains won’t ruin your trip. In fact, they only make things more beautiful, carving dramatic formations into the Koolau Mountains, feeding waterfalls, and allowing tropical plants to flourish. 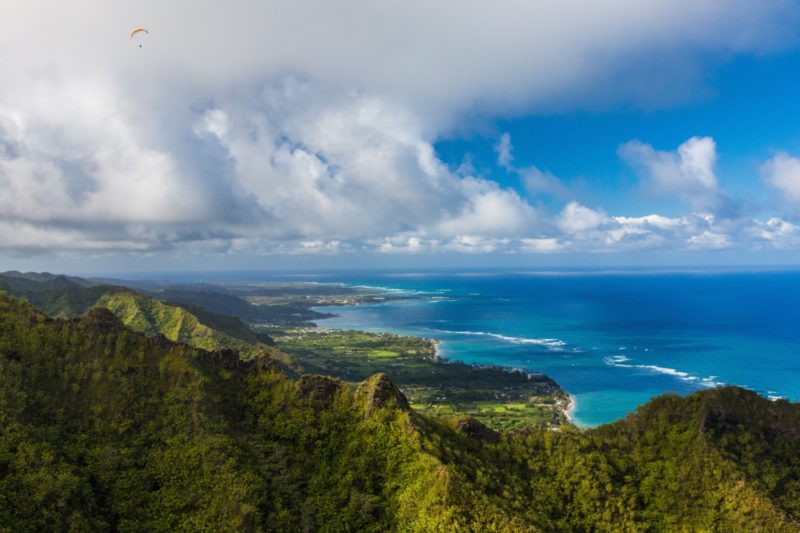 Here are a few of our favorite beaches to check out on the east Oahu coast:

Tucked away in a small cove in the shadow of its namesake lighthouse, Makapuu Beach is popular with the younger crowd, mostly due to its big surf that attracts bodyboarders from across the island. Pull up a chair and enjoy the show, but beware of swimming here as the currents can be quite strong. Always check with lifeguards before entering the water.

Waimanalo Beach is the longest stretch of beach on the Windwardside. With few-to-no services and no commercialization, it shines for its simple, scenic beauty and is one of the most “local” beaches on the southern, east side of the island. Great for swimming, beginner bodyboarding, and sunbathing.

Lanikai Beach, with its powdery white sand, clear blue water, and a vantage point of two offshore islands, is routinely voted as one of the world’s best beaches.

Lanikai Beach in Kailua with Nā Mokulua (the “Mokes”) on the left. Image credit: PBPhotos

Kailua Beach is a playground for locals on the Windwardside, home to many watersports. Full of pristine white sand, it has clear blue water and is relatively undeveloped, making it less of a spectacle than Waikiki and more of a paradise-like neighborhood hang-out kind of beach.

A beautiful beach park with spectacular views down the windward coast and the gorgeous, stunning cliffs of Kualoa Ranch behind. At low tide, you can just about walk out to the island of Mokolii (also known as Chinaman’s hat). Otherwise, it’s an easy kayak.

the Windward side has no shortage in activities if you don’t feel like hanging on the beach. We summarize some of the most popular hikes, water activities, and luaus, below.

There are many hikes on the east side of Oahu — below are a few of the most accessible trails:

Behind the Lanikai neighborhood is the trailhead for the Lanikai Pillbox Hike, one of the most scenic and popular hikes on Oahu. A short but steep one-mile climb brings you to a set of leftover army bunkers and gives you an overlook of Lanikai Beach, Kailua Town, and the Koʻolau coast.

Many people tackle this hike in the early morning to watch the sun rise off the coast. 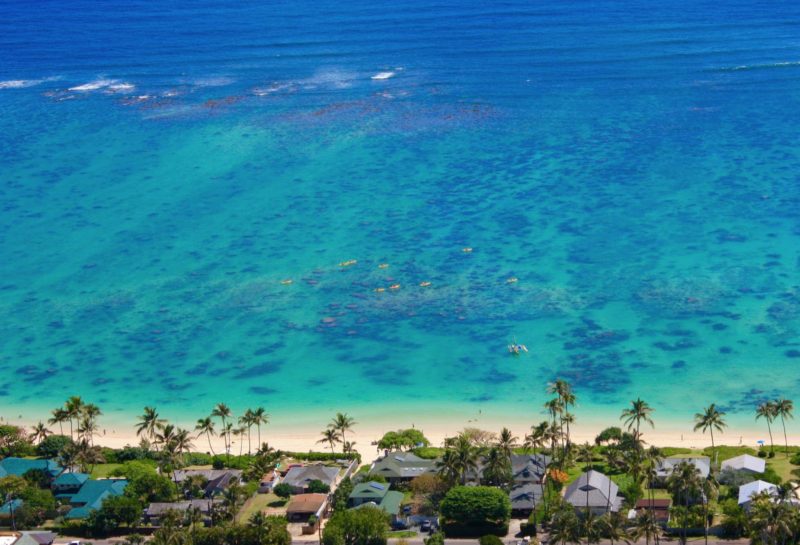 People in kayaks heading out to the mokes. Note the reef that protects the bay near the top, and the coral in the bay. Image credit: Dennis Frank, source.

This 1-mile paved trail offers a mellow climb to the Makapuu Lighthouse and an overlook of the southeast part of the island, one of the best bang-for-buck hikes in terms of its accessibility and payoff. On clear days, you can see the islands of Molokai, Lanai, and Maui in the distance. 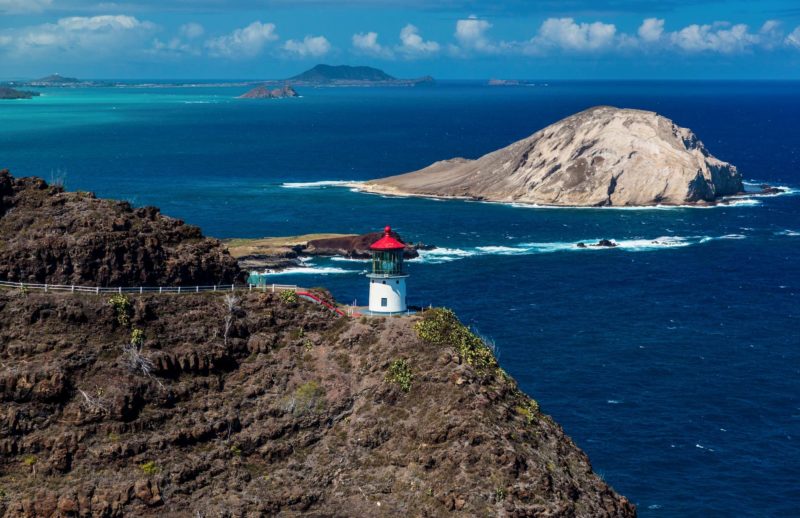 This 4+ mile hike gains almost 2,000 feet on the way up to the first of three peaks that rise above the Windward side. The views from the first two peaks offer the best vantage points of the Koʻolau range and the coast. While the first two peaks are relatively safe, peak three is very dangerous and it is not recommended to summit.

Lots of beautiful beaches means there are many things to do in the water! Surfing, Standup Paddleboarding and Kayaking are all popular pastimes on the windward beaches. Unfortunately, the east coast has poor snorkeling spots.

Kailua Beach is the hub for paddleboarding and kayaking on Oahu’s east side. Consider renting a board/kayak or hopping on a tour from Kailua Beach Adventures, located across the street from the beach park.

Castles Beach in Kailua is a beginner-friendly longboarding break at the far north end of Kailua Beach. You can read more about the break here.

There is only one luau on the east side: the Ka Moana Luau at Sea Life Park in Waimanalo. Check the online schedule for showtimes and ticket prices/packages.

You can find more Luau shows in central Oahu, at the Polynesian Cultural Center.

Other Outdoor Activities and Tours

Kualoa Ranch (see below for more) is the main site on the windwardside for a variety of tours, including ATVs, ziplining, horseback riding, and mountain biking. It also has movie-set and jungle expeditions.

As far as towns go, Kailua is the main hub of the east side, offering a beach-side community full of things to do (see also our full guide on Kailua).

Other popular places to see on Oahu’s windwardside are:

Sea Life Park is a family-friendly marine and wildlife park that offers fun and educational activities, including swimming with dolphins and sharks. The Park also focuses on conservation in Hawaii. There are a variety of ticket prices and packets, depending upon which experiences you choose.

Located in Valley of the Temples Memorial Park, the Byodo-In Temple commemorates Japanese immigration to Hawaii and offers a peaceful setting among the Ko’olau Mountains in Kaneohe.

This Buddhist temple is a smaller replica of a nearly 1,000 year-old temple in Uji (Japan) and, though no official services are held at the temple, the public is welcome to practice self mediation or prayer on the temple’s grounds. Entry fee is $4, cash only.

One of the busiest attractions in all of Oahu, the Polynesian Cultural Center is the “Epcot” of Hawaii – a large park split into different villages that represent the island nations of Polynesia, such as Hawaii, Tonga, Fiji, Samoa, and more. Each village has cultural presentations and educational performances that depict its life and culture.

Other attractions within the park include the Polynesian Football Hall of Fame, a variety of luaus, a nightly feature show, and plenty of food vendors. There are many different types of tickets, depending on how long you want to visit and how much you want to experience. A visit can range from a couple hours to multiple days.

The site of one of the most historic battles in Hawaiian history, the Nuuanu Pali Lookout is also one of the best vantage points of the windwardside.

“Pali” means cliff, which is exactly where this lookout stands, about a thousand feet up on the east side of the Ko’olau Range. In 1795, King Kamehameha won a decisive battle here over the Oahu army, conquering the island and bringing it under his rule. In the clash, hundreds of men were driven off the side of the cliff, offering a grim reality to this otherwise stunning modern view.

In addition to its tours (see above), Kualoa Ranch holds much cultural and historical significance. One of the last remaining undeveloped series of land divisions on Oahu, it has become a place of recreation and a favorite location for Hollywood filming thanks to its preserved, gorgeous landscape.

Even if you don’t jump on a tour, stop by for local plate lunches at Aunty Pat’s Cafe – including beef and pork raised right on property – as well as meat and oysters to go.

Looking back to the ridge from the Kualoa Regional Park. Image credit: Daniel Ramirez, source.

This U-shaped bay and State Park is small but incredibly scenic as a result, squeezed in between the peaks of the majestic Ko’olau Range. The primary purpose of this park is to nurture and foster native Hawaiian cultural traditions and the cultural landscape of rural windward Oʻahu.

You can find two relatively easy hiking trails in the park, as well as extensive remnants of Hawaiian culture in the valley. Camping, paddleboarding, and kayaking are all possible, but there are no rental stores, so you’ll have to bring your own equipment.

Here are some places to grab a drink or a bite as you cruise the east side:

Keneke’s: If you’re after a large and affordable plate lunch, such as Kalua pork, stop by local-favorite Kennekes. It has two locations on the east side, one in Waimanalo and one in Punaluu.

Ai Love Nalo: This plant-based restaurant in Waimanalo uses local ingredients in its dishes and offers a peaceful garden setting.

Buzz’s Steakhouse: Whether it’s one of their famous mai tais and a couple appetizers on the patio, or a steak inside, Buzz’s is one of the only restaurants near the water in Kailua.

Kalapawai Market: With two locations in Kailua, Kalapawai has you covered for to-go sandwiches.

Shrimp Shack: This food truck in Punaluu has you covered for shrimp and seafood plate lunches.

Putting it all together: a sample 1-day itinerary for east Oahu

Wake up early for the sunrise on Kailua or Lanikai Beach, perhaps knocking out the Pillbox Hike or simply walking the sandy shores at first light.

Pick up breakfast at Kalapawai Market, then hit the road and drive north to Kualoa Ranch for a tour of your choosing. Continue north to check out Kahana Bay, where you can pause for a few moments on the beach, or take a walk through the state park.

Check out the Shrimp Shack or Keneke’s in Punaluu for a local lunch, then cruise back down south. Enjoy a relaxing afternoon at Kailua, Lanikai, or Waimanalo Beach. Finish the day with a beer at Lanikai Brewing or a mai tai on the patio at Buzz’s.

We have made other “1 day in …” itineraries for Oahu which are very useful to start planning your trip:

Are you thinking about booking a tour?

Good news, we can help!

Have a look at our new tour section to see a curated list of tours that we know and love 😍, that receive consistent high praise 🙌 and good reviews, and that give back to the community and try to minimize their impact on the environment 🌴.