Total lunar eclipses must have been ominous events – especially for those that couldn’t predict them. In many cultures a lunar eclipse was a sign of celestial wrath that foreshadowed famine or disease.

For example, in Chinese “lunar eclipse” is written as 月食 (pronounced Yue Shi), which means “the devouring of the moon”. Chinese folklore tells that a dragon is eating the moon, and that lunar eclipses are an extremely bad omen. Even into the 19th century, the Chinese navy fired cannons to scare off the dragon they imagined was eating the moon.

And did you know that Columbus used a lunar eclipse to scare the locals into giving himself and his men provisions while in Jamaica during 1504?

Of course, dragons would never eat the moon, and nowadays we have, just as Columbus in 1504, a much better explanation for lunar eclipses. See for example this example from the Youtube channel of the Canada–France–Hawaii Telescope (located near the summit of Maunakea).

What is a Lunar Eclipse?

The moon in Polynesian Mythology

In Polynesian mythology the goddess of the Moon is called “Hina”.  In Hawaii, Hina is often called ‘Rono’ or ‘Lono. She is the mother of Maui and is mostly described as a very attractive, smart, beautiful, determined young woman pursued by men and other creatures. Hina becomes tired of living in the crowd, flees to the moon, and eventually becomes goddess of it.

In Maori mythology an eclipse of the moon happens because Hina (or Rona) is attacking and destroying the moon. When the Moon does not appear the twain are battling with each other, and so cannot be seen. After the combat the moon bathes in the waiora a Tane (sunlight), and so returns to us again young and beautiful (source).

What happens during a lunar eclipse? 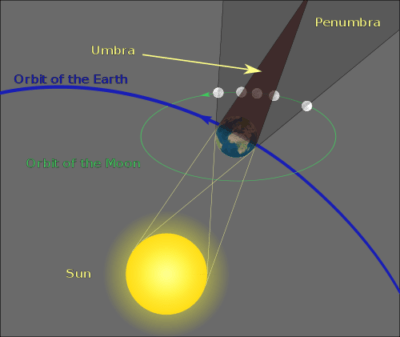 Just like any object, earth casts a shadow if light shines on it. Night falls as you spin into this shadow and morning breaks as you leave it. Earth’s shadow is also cast into space, and sometimes the moon passes through this shadow. If the moon moves into our ‘night’  we see it from earth as a lunar eclipse.

A good question to ask now is:

“If night and a lunar eclipse are both caused by earths shadow, why is night dark but an eclipsed moon red?”

The answer would be:

“For the same reason sunsets are red and the sky is blue: Rayleigh Scattering”

The color of the sunset: why are they so red?

Did you know that the real color of the sun is not yellow but almost white? We only see the sun as yellow because most blue sunlight is scattered by the atmosphere out of our line-of-sight towards the sun as a result of Rayleigh scattering.  Rayleigh scattering thus makes the sun look less blue and more yellow. The blue light scatters around so much, that it appears to come from every direction when it finally reaches our eyes. This is why the sky looks blue. If you are curious, you can read more about the color of the Sun at science20.com.

As the sun is lower on the sky, the sunlight goes through more atmosphere, and more blue light is removed from the sun. Hence, the closer the sun comes to the horizon, the redder it looks. The red sunlight is also reflected off low hanging clouds just before sunset or just after sunrise. The clouds then also get the red color and this is what makes the sky around the sun red during sunset and sunrise.

The red color of the eclipsed moon: it’s like a sunset on steroids!

Blue light gets scattered far more easily than red light. Here on earth we can barely notice the bending of the red light – there simply isn’t enough small dust in the atmosphere between the sun and ourselves to make it noticeable. To really see the scattering of red light we have to look at a lunar eclipse.

Red sunlight that travels through our atmosphere gets scattered (‘bent’) into Earths shadow (see illustration). The red light does not get bent enough to illuminate the shadowed (night) side of earth, but it does reach the lunar surface. This is why an eclipsed Moon has the same color as the sunset. 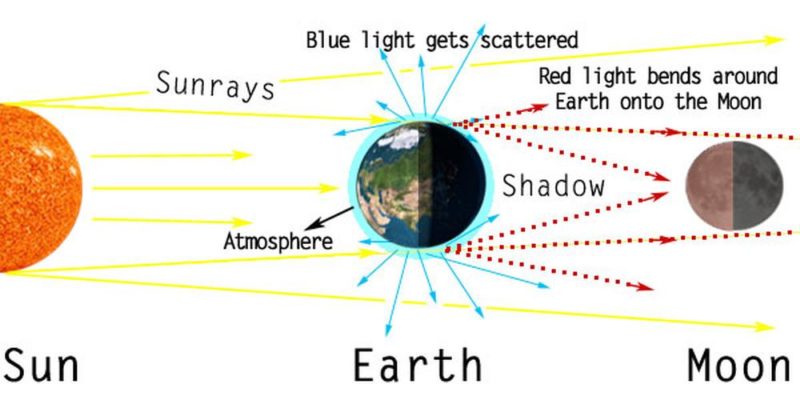 Penumbral eclipses are the most common and least spectacular type, as the moon only moves through a weakly shadowed part of space – the ‘penumbra’ that is shown in the first illustration on this page. Penumbral eclipses are very difficult to notice even if you know they are happening, and we won’t mention them in our list.