Scroll down this page to read about the history of all four anthems.

Hawai’i Pono’i can be translated as “Hawaiʻi’s own true sons”, and the lyrics were written in 1874 by King David Kalākaua.  Hawaii legislature proclaimed Hawai`i Pono`i the state anthem in 1967. 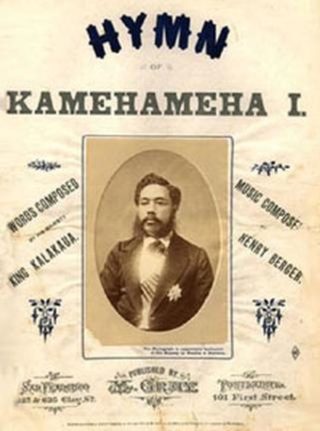 Hawaiʻi Ponoʻī is the state song and former national anthem of Hawaiʻi.

You find the lyrics and translation plus a video of Hawai’i Pono’i below. While listening, scroll down to learn about the history of the four national anthems of Hawaii.

You can hear Hawai’i Pono’i in the following video:

The history of Hawaii’s National Anthems starts in 1860. Before this year, the kingdom of Hawaii did not have its own anthem, but used the British royal anthem “God Save The King”. 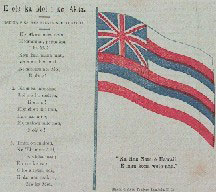 In 1860, Kamehameha IV organized a contest to replace the British royal anthem with a song with Hawaiian lyrics set to the tune of “God Save The King”. The winning entry of this contest was E Ola Ke Aliʻi Ke Akua, translated as God Save the King [lyrics on wikipedia].

The author (Prince William Charles Lunalilo, who later became King Lunalilo) is said to have composed the song in 20 minutes. He was given USD 10 as a reward. 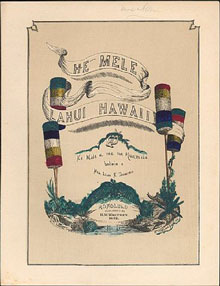 King Kamehameha V wanted to replace the merely translated British anthem by a song with a truly Hawaiian background. The new song “He Mele Lāhui Hawaiʻi” (“The Song of the Hawaiian Nation”) was composed in 1866 by queen Lili’uokalani.

The lyrics of this song praise the Hawaiian Islands. It asks the lord for a blessing of the land, it’s people, chiefs, and king. You can read a part of the song lyrics in Hawaiian (left) and translated to English (right) below. [Lyrics for the complete song]

This National Anthem survived for ten years until the brother of queen Lili’uokalani replaced it with his own composition “Hawaiʻi Ponoʻī”.

King David Kalākaua wrote the words of Hawaiʻi Ponoʻī, and the music was composed by his royal bandmaster. This king has had quite an influence on current day Hawaiian culture.

King David nicknamed “the merry monarch” because of his love of the joyful elements of life, and during his reign hula was revived. The now immensely popular yearly merry monarch festival [wikipedia] on Hawaii was named after king David Kalākaua.

Hawai’i Pono’i was the adopted song of the Territory of Hawaiʻi, and later became the state anthem by an act of the Hawaiʻi State Legislature in 1967.