Haumea is a dwarf planet in our solar system named after the Hawaiian goddess of fertility and childbirth. Haumea was first discovered by the Keck Telescope, one of the world’s best optical telescopes located on Mauna Kea on the Big Island (see: stargazing on the Big Island), in 2004. 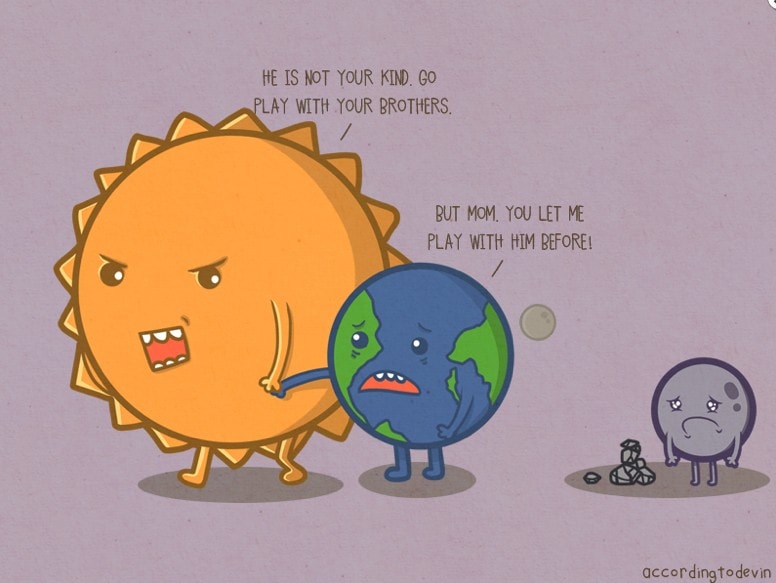 Pluto got demoted from “planet” to “dwarf planet” because of the discovery of more and more Pluto-like-objects like Haumea. Now, Pluto is not a planet anymore. Cartoon by accordingtodevin on tumblr. 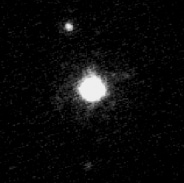 Keck image of Haumea and its two moons. Hiʻiaka is above Haumea (center), and Namaka is directly below. Image credits: M. Brown et al. (2006)

The discovery of Haumea is shrouded in controversy. There are two teams of scientists claiming the discovery: an American team and a Spanish team. As of now (2022), neither team is officially credited with the discovery but the discovery location is listed as the Sierra Nevada observatory in Spain. Read more about this controversy.

There are official rules about the naming of objects like Haumea. Haumea is a “classical Kuiper belt object“, and such objects are given mythological names that are associated with creation. Because the Keck Telescope was instrumental (for the American team) to the discovery, the name of the Hawaiian goddess “Haumea” was chosen. The Spanish team had suggested a different name: Ataecina (the Iberian goddess of the underworld).

The shape of Haumea is somewhat extreme. Astronomers found out that it is an ellipse with a size of 1920 x 1540 x 990 km (Lockwood et al. 2014). This shape is consistent with a *very* rapidly rotating object, where the rotation elongates the body.

Haumea is orbited by at least two small icy moons. These moons are called after two daughters of Haumea:  “Hiʻiaka” (the patron goddess of the Big Island of Hawaii) and “Namaka” (the goddess of the sea).

Another dwarf planet discovered in 2005 was names after the Rapanui god of fertility, Makemake. It has a day length of 22.5 hours, similar to that of earth and mars, but takes 305 years to orbit the sun.  More on Makemake.

If you think that 305 years is a long “year” (one orbit around the sun), then hold onto your hats for the fwarf planet that was named “Leleakūhonua” in 2020. Leleakūhonua has the largest orbit of any dwarf planet or trans-neptunian object in the solar system, and it takes 32,000 years for the object to complete one full orbit around the Sun! It was first discovered in 2015 and will make its closest approach to the Sun in 2078.

Who is Haumea? Hawaiian mythology

Myths told of Haumea center about themes concerned with food supply for the life of man and marriage and birth for the increase of the family stock. By rebirths she changes herself from age to youth and returns to marry her children and grandchildren. She lives as a woman in Kalihi valley and transforms herself into a growing tree in which she conceals her husband from those who are leading him away to sacrifice. She secures for a chiefess a painless delivery in childbirth and receives in reward “the tree of changing leaves” out of which gods are made (source). Martha Beckwith has summarized the many stories about Haumea in her excellent book: Hawaiian Mythology (pages 276 – 290. Read online in the Hawaiian electronic library or buy the book on amazon)

Planet or dwarf planet, what is the difference?

Dwarf planets are a pretty recent ‘invention’. Problems in planet-land started when astronomers were finding more and more objects that were very much alike Pluto. Should these new objects also be called a “planet”? If so, estimates are that we would soon have to add up to 50 new planets to our solar system. 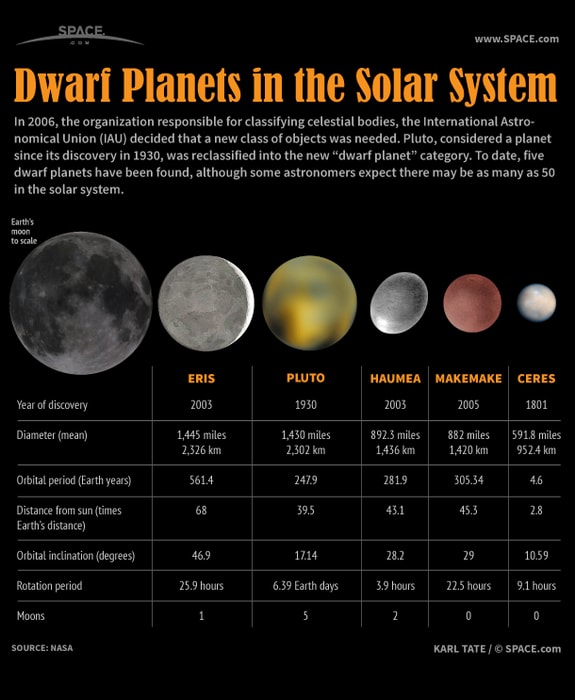 List of Dwarf Planets in our solar system as per 2012. source.

This also means that Pluto got demoted from planet to dwarf planet.

A sad piece of trivia: between the time Pluto was discovered and its declassification as a planet, it had not even completed one revolution around the sun! (one revolution about the sun of Pluto would be one year on/for Pluto)